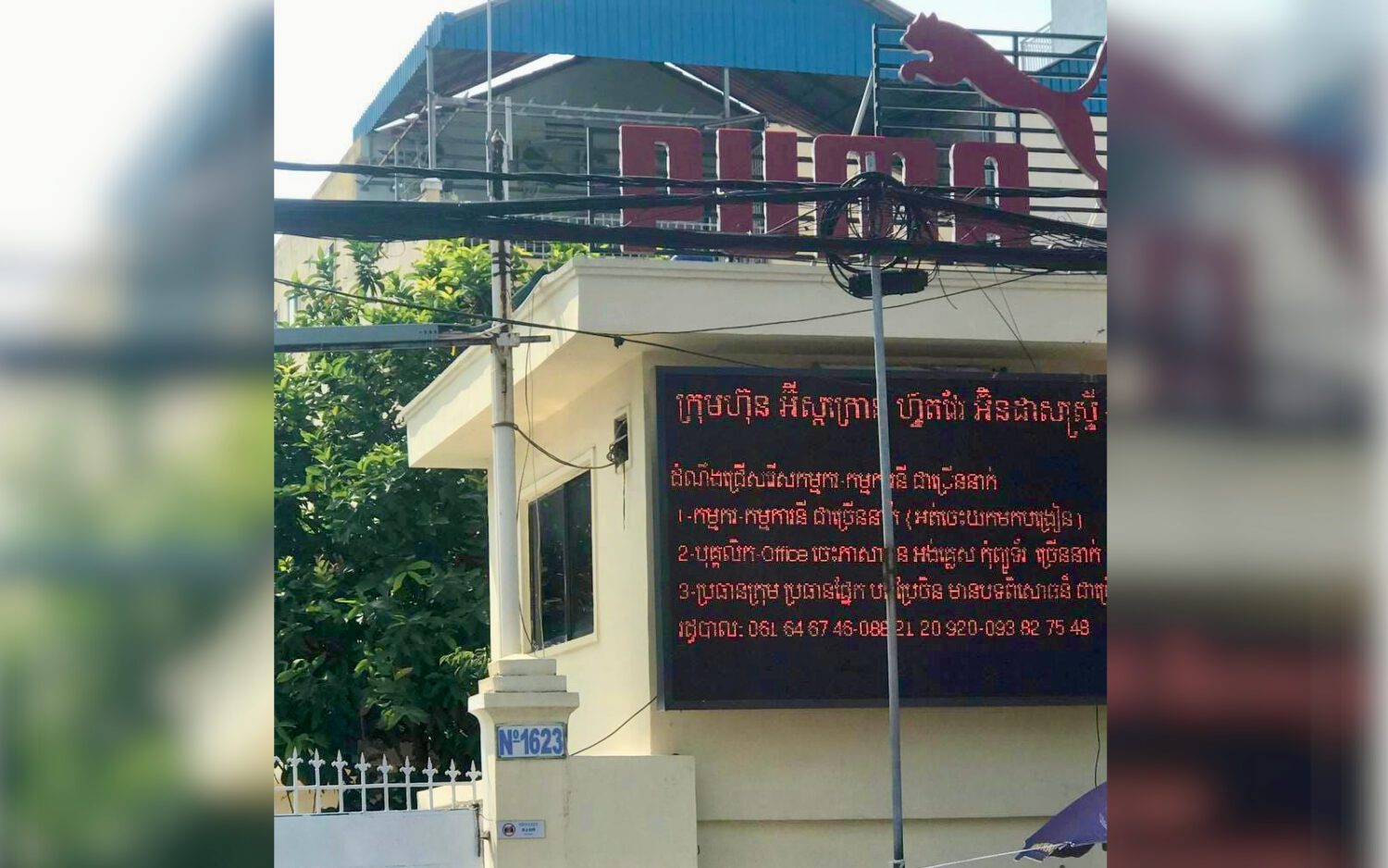 The front gate of Eastcrown Footwear Industries with a Puma sign above it. (Independent Trade Union Confederation)

Seven garment workers had contracts terminated at Puma supplier Eastcrown Footwear Industries in Phnom Penh after they tried to form a union.

Factory management denied the workers’ removals were related to the union activity, but would not elaborate.

An Yousa said this week that she had been dismissed from Eastcrown after five months working there. She was among 10 workers who moved to start a union at the factory as she had experienced what she considered to be exploitation and violation of workers’ rights.

Workers were forced to work overtime, denied requests to take leave, and made to sit through meetings during break periods, Yousa said.

The factory tried to get the unionists to join the factory’s own company union instead, but when the workers declined, their contracts were terminated on October 11, she said.

“They dismissed us because we formed a union at the factory. The factory didn’t continue our contract. They said if we resigned from our union and joined their union they would continue our work contract.”

Duong Sokna, another of the removed unionists, said the factory’s company union never helped the workers.

The seven unionizing workers who lost their contracts are Yousa, Sokna, Eam Sambath, Duong Soknang, Matt Vy, Sarem Tharim and Suong Sarin. The three others who tried to union have not yet reached the end of their contract periods.

Eastcrown administrative director Hy Hong said the factory’s reason for laying off the workers was not because they had formed a union, but would not elaborate.

Labor Ministry spokesman Heng Sour said the ministry was looking into the issue.

“If the Ministry of Labor uses the mechanism of the Labor Inspectorate effectively and promotes the implementation of the law, then union discrimination will no longer exist,” Sethyneth said. He considered union-busting to be a human rights abuse, he said.

Eastcrown Footwear Industries has about 3,000 workers, according to the dismissed unionists, and U.S. bills of lading show it has supplied shipments to Puma North America.

Earlier this year, the Coalition of Cambodia Apparel Workers Democratic Union said about 1,400 union leaders and active members have been laid off in cases of alleged union-busting in the last five years.