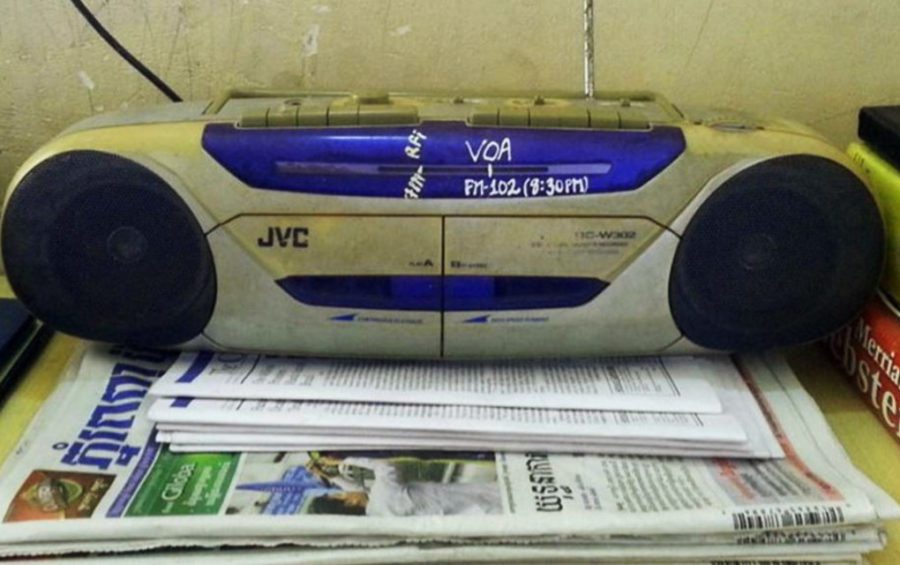 UPDATED 12:53 p.m. — U.S.-funded broadcasters Voice of America and Radio Free Asia have been given a tentative green light to return to Cambodian airwaves — a development some local radio stations welcomed, but with trepidation.

VOA and RFA were among news outlets cut off from FM broadcasting in Cambodia in 2017 as dozens of local stations were shuttered. Around the same time, independent newspaper The Cambodia Daily closed under pressure due to a disputed tax bill, RFA shuttered its local office, two RFA journalists were arrested for espionage, opposition leader Kem Sokha was arrested for treason, and the main opposition CNRP was dissolved.

The government accused VOA and RFA of being part of a U.S. attempt to foment “color revolution” in the country.

A week later, RFA Southeast Asia managing director Matthew Pennington met Kanharith in Phnom Penh. Ministry spokesman Meas Sophorn said afterward that RFA could reopen its Phnom Penh office and broadcast on the radio as long as it stopped calling the government the “Phnom Penh regime” or “Hun Sen regime.” Some consider “regime” to have an authoritarian connotation.

“His Excellency the minister stated that RFA can work again in Cambodia but needs to change the words that they use,” Sophorn said.

RFA spokesman Rohit Mahajan would only say that he had not yet received a formal decision on the issue and would clarify RFA’s position once it had further details.

Beehive radio broadcaster Mam Sonando said on Monday that VOA — though not yet RFA — had approached him about hiring airtime, and he had another meeting with the outlet on Tuesday to talk price, policies and specific programs to broadcast.

“After the meeting, I will be able to fill out a form and make a request to the Information Ministry,” Sonando said. “I’ll let the ministry decide.”

He planned to simply follow the ministry’s orders, he said.

“I don’t want to have a problem with the ministry because we are working under the control of the ministry,” he said.

Sonando is a long-time journalist and politician who has gone to jail three times over his work.

However, there were risks to having VOA and RFA broadcast on her frequency, she said.

“As the owner, when we give them [airtime], we have to listen, inspect. We have to listen. If the comments aren’t professional, we’ll have to take responsibility,” Sundaneth said.

FM 100 director Kim Sopanha said she had previously broadcast RFA content and was happy it could return, but was concerned the news outlet’s comeback to Cambodia could be short-lived.

“They will close it,” Sopanha said.

Women’s Media Center director Vuon Soviry declined to comment. Before 2017, the radio station was among the main broadcasters of RFA and VOA content.

VOA has not yet responded to questions.

VOD, run by the Cambodian Center for Independent Media, was also among the news outlets knocked off the air in 2017. The center’s media director, Nop Vy, said he welcomed the developments regarding VOA and RFA, and hoped the ministry would be open to local radio stations also broadcasting VOD news.

May Titthara, executive director of the Cambodian Journalists Alliance, which has VOD editors on its board, said VOA and RFA returning to Cambodian airwaves would be a step in the right direction.

“We want to see more space for the press in Cambodia. If there is space, it will allow people to receive comprehensive news, and allow the media to fulfill their work without fear,” Titthara said.