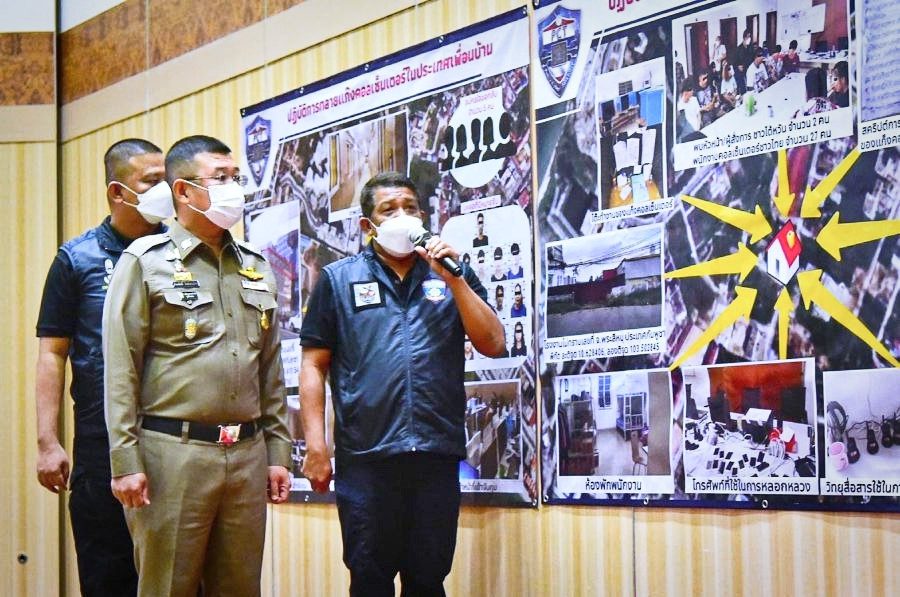 Thai police share information about a Sunday raid on an alleged scam operation in Sihanoukville at a Thursday press conference in Bangkok, March 24, 2022. (Supplied)

BANGKOK — Apparent human-trafficking victims were among dozens of Thai and Taiwanese nationals taken in by police during Sunday afternoon raids on alleged phone scam operations in Sihanoukville, Thai police said at a Thursday press conference.

A series of photos and videos released by police detail the elaborate scams, which in one operation apparently involved scammers pretending to be logistics staff and police officers. Some Japanese names and addresses could be seen in some of the instructions for scammers.

The raids come amid a spate of allegations of forced labor and scam operations in Sihanoukville. Some victims say the managers of compounds in the city are detaining large numbers of workers made to perpetrate online scams or risk beatings and torture. Some of the compounds have been linked to prominent business people and a ruling-party senator.

A total of 61 people, 59 Thais and two Taiwanese, were taken into custody from the raids on Sunday at two locations in the city, according to a press release issued by Thailand’s cybercrime police taskforce. One was said to be a base of phone scammers tricking victims that their names had been used to send illegal packages abroad, while another was a romance scam luring victims to make investments on fraudulent cryptocurrency trading platforms.

Deputy police commissioner Damrongsak Kittiprapat said the two Taiwanese identified as managers of one operation and 26 of the Thais already had a warrant out on them for a range of charges including fraud and money laundering. The rest of the Thai nationals were being interrogated to determine whether they were victims of human trafficking or not.

He added that the Cambodian authorities said after the criminal prosecution process was done in Cambodia, the suspects would also be extradited to Thailand.

The first raid was at an abandoned factory on Santepheap Street, where 28 people who were named in the warrant were arrested, according to the press release. Police said scammers pretended to be staff of international logistics companies DHL and FedEx, calling victims to tell them that foreign-bound packages with their names as a sender had embargoed items inside and had been seized by customs.

If the victims fell for it, they would be transferred to another line where scammers pretended to be police officers from Chiang Mai city telling them they were a victim of identity theft and were on the verge of being charged with money laundering. The scammers told their marks this was a major crime and threatened them to transfer money as bail, otherwise they would be arrested and detained.

Photos and videos released by Thai police showed whiteboards, notebooks and pieces of paper mostly with handwritten notes in Thai that appeared to be scripts that the scam workers used for talking with victims. They presented a flow of dialogue with elaborate details and information such as the name and rank of police officers, police station address and phone numbers, including some Japanese names and addresses.

The Japanese embassy in Cambodia has not responded this week to questions about forced labor in the kingdom.

One instruction note for those pretending to be a police officer stated they “must threaten and fix a crime” on victims and “convince them that they have already been charged.”

There were also photos of what appeared to be lists of names and phone numbers of potential victims with notes of progress, including several other documents that looked like court warrants and summonses, which police said were fake.

Another raid was at a building on 2 Thnou Street called “Diwei Entertainment City,” which Thai police said was a casino. The scam operation was located on the fifth floor of the building, where workers engaged in a romance scam on the dating application Tinder. Victims would be tricked to invest in cryptocurrency on a fraudulent platform, in which they would be unable to withdraw money later on. Thirty-three Thai workers were found at the site. Police did not mention if any managers were also there.

Damrongsak said workers at the second site were being questioned, adding that at least five of them appeared to be victims of human trafficking.

“Currently, phone scamming is a rampant problem, and their tactics have been evolving into several different kinds,” he said. “The Royal Thai Police [has been ordered] to intensify the crackdown and raise awareness among the public.”

There was no immediate information about the estimated scale of damage or the number of scam victims from these two operations.