Rainsy Fails to Board Flight to Bangkok 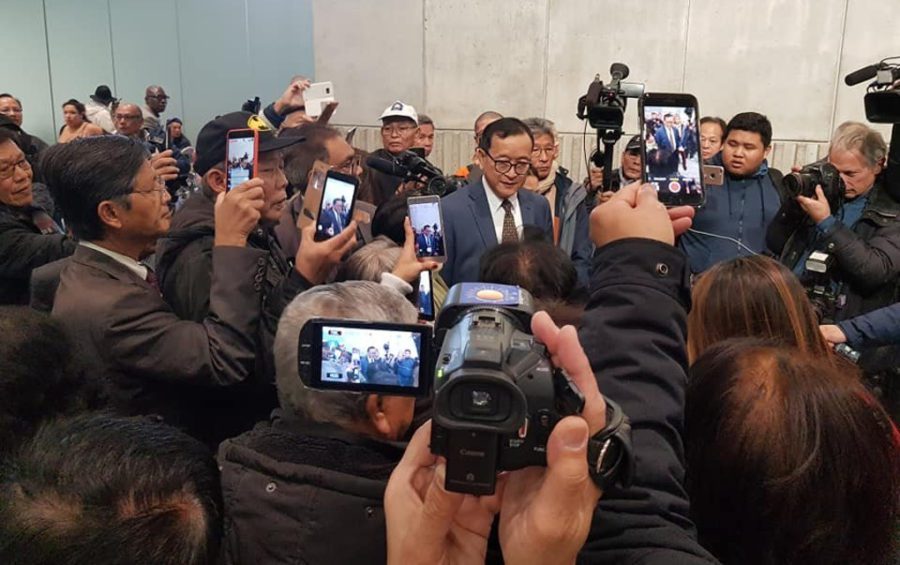 However, Thai Airways’ itinerary for Rainsy online shows a departure date of Saturday, November 9, despite the long-time opposition leader contesting any claim of a change in plans as “fake news.”

Earlier in the day, Rainsy posted a photo on social media showing him packing neckties into a suitcase for a Thursday departure.

He arrived at the airport after 11 a.m. Parisian time for a 12:30 p.m. flight (5 p.m. and 6:30 p.m. Cambodian time, respectively), chanted “long live Cambodia” with a couple dozen supporters who held up flags, then told about 10 gathered journalists that he had been barred from checking into his flight, according to a live video stream on Facebook.

“[They have] instructions from very high up to not allow me to board. This is my right as a Cambodian. I’m a citizen. I’m a French citizen, I’m a Cambodian citizen,” he said, holding up a passport.

He insisted that any talk that he had changed his plans was “fake news,” and said he would rebook with another airline to attempt to fly into Asia and get closer to returning to Cambodia.

He also posted on Twitter that “nothing has changed in my travel plans.”

However, Rainsy posted his flight booking details on Facebook and Twitter earlier this week, showing both his booking reference number and legal name of Sam Rangsi.

Entering his booking code and last name into Thai Airways’ website displays the ticket’s details: as of 5 p.m., a round-trip ticket from Paris to Bangkok on November 9-15, with diabetic meals and reserved seats 71F and 72F.

Prime Minister Hun Sen made the same claim earlier in the day during a speech at the Sokha Hotel in Phnom Penh to announce a national development plan for 2019-2023.

“Now, his flight leaving from Charles De Gaulle to Suvarnabhumi, Bangkok changes to the 9th. So what does it mean to you, all his supporters? Is he believable?” Hun Sen said. “Soon, he will declare that he won’t come because Thailand bans him from entering its territory. If Thailand does so, why doesn’t he just take a direct flight to Siem Reap and then continue to Phnom Penh? Why [does he] need to come that way?”

Rainsy announced in August his plan to return to the country on November 9, vowing to bring democracy to Cambodia. He has lived abroad since late 2015 to evade court cases that he calls political.

The government has called Rainsy’s pledge to return a coup attempt, and has arrested dozens of supporters in Cambodia and deployed troops along the Thai border.

The CNRP has said it would try to rouse thousands of Cambodian migrant workers in Thailand to support Rainsy and other senior leaders in crossing the border.