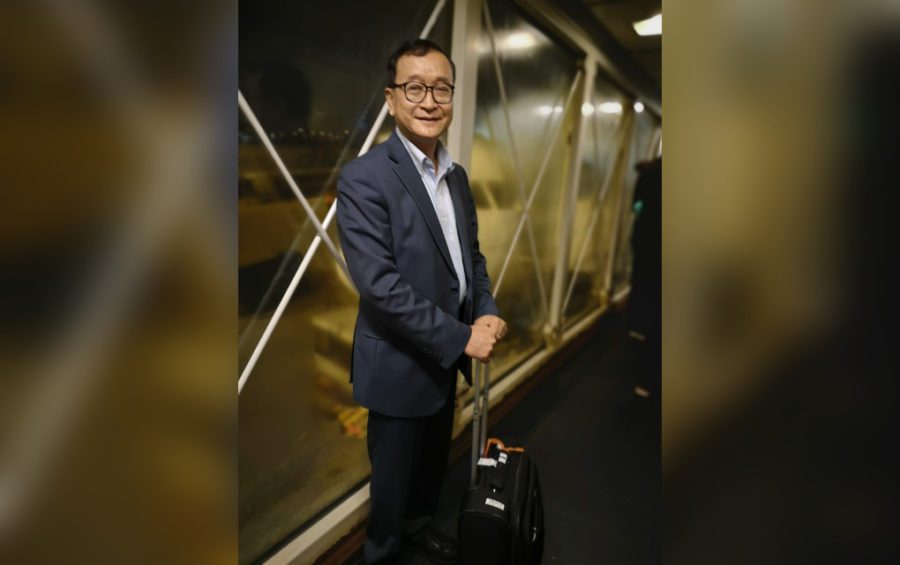 Sam Rainsy at what he wrote was a Paris airport before boarding a flight to Asia, in a photo posted to his Facebook page late November 8, 2019 Central European Standard time, early morning November 9, 2019 Indochina Time.

BANGKOK — CNRP acting president Sam Rainsy, who had pledged to return to Cambodia today with aims of putting the nation on a democratic path, will arrive in an undisclosed Asian country this afternoon, opposition vice president Mu Sochua said.

But exiled party leaders of the outlawed main opposition party have been blocked from entering their country, with “all routes to Cambodia” closed to them, Sochua told VOD.

Rainsy, a co-founder of the CNRP, said he was prevented from flying from Paris to Bangkok on Thursday.

However, he boarded a plane in Paris on Friday “for another destination,” according to a post on his Facebook page.

“Our plan still continues, even though we face some obstacles, but we have solved a lot of problems,” Rainsy said in a video statement.

“Now we have achieved 70 percent and soon we will reach 100 percent. At that time, the change will really come,” he said.

Sochua said exiled CNRP leaders were being prevented from entering Cambodia and neighboring countries, but were continuing the party’s struggle to return by getting as physically close as possible to their homeland.

“We want to be in Cambodia. All routes to Cambodia for us are closed,” she said. However, “Mr. Rainsy is moving as close as possible” to the country, even though “physically we cannot cross the border.”

Sochua is in Kuala Lumpur, after having been detained and later released by Malaysian immigration authorities this week, and being prevented from entering Thailand last month.

“The government of Thailand has taken a position very clearly to be on the side of Mr. Hun Sen,” she said.

Thai Prime Minister Prayuth Chan-ocha told reporters earlier this week that Rainsy was unlikely to be allowed into Thailand.

Sochua said she has a ticket to leave from Malaysia to another country on Tuesday.

“We are not saying it’s over,” she said.

At the Poipet International Border Checkpoint in Banteay Meanchey province, Cambodian authorities briefly blocked all traffic in and out of Thailand before selectively reopening the border at 9 a.m. on Saturday.

People at the border told VOD that they were still being turned away if their reason for crossing was not deemed necessary.

Sok Eang, a hairdresser who works at the Rong Kluea market on the Thai side of the border, was waiting to cross so she could get to work.

“I don’t feel afraid, I just can’t do my business,” Eang said.

Another man, who did not give his name, said he works at the DNA Star Vegas casino in the border area, and was simply told that he could not enter because “it’s an order.”

He said he was disappointed that he could not even cross to get to his home on the Thai side of the border. He did not say what he was doing in Cambodia.

“We asked the authorities, but they do not allow us to cross the border, even to go to our home,” he said.

Sochua claimed Thai authorities at the border were questioning people about why they were crossing today and if they knew Rainsy.

A special passage was made available for journalists and human rights monitors to enter the border area.

Despite the challenges, Sochua said the CNRP’s objectives remained the same, including returning to Cambodia, restoring democracy, ensuring people’s rights to exercise freedom of speech and expression, releasing party president Kem Sokha and maintaining Cambodia’s access to a European Union preferential trade agreement, which is under review due to political and human rights concerns.

“The struggle for democracy continues,” she said.

Since Rainsy, who has lived abroad since late 2015, announced in August that he would return to the country on November 9, dozens of CNRP members have been arrested and jailed in connection to various opposition campaigns and social media postings that expressed support for Rainsy or criticism of Hun Sen.

Rainsy, Sochua and other senior CNRP leaders have been convicted of crimes against the state, which they say are political, and are wanted by Cambodian authorities. Government officials regularly call them convicts and traitors and have branded the CNRP leaders’ return campaign an illegal coup attempt.

The government of Hun Sen, who has led Cambodia for more than 30 years, was doing anything necessary to stay in power, including violating Cambodian citizens’ rights by not allowing CNRP leaders into the country and voiding their passports.

“He’s putting us in exile,” Sochua said of Hun Sen.

Saory Pon, general-secretary of the CNRP overseas, told VOD that the party would hold a press conference in Bangkok on Saturday afternoon to detail Rainsy’s arrival and the security situation of CNRP members in Bangkok.