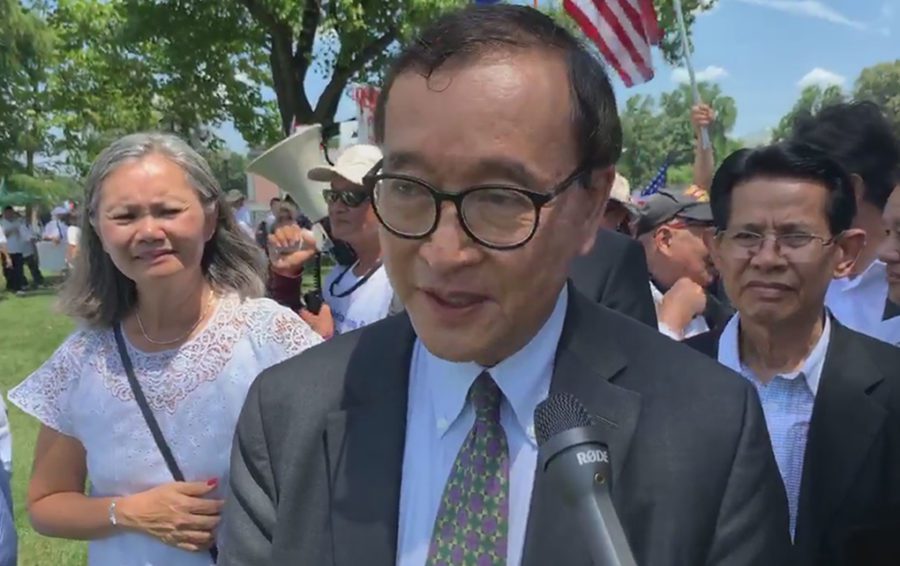 Sam Rainsy and supporters gathered in front of the US’s Capitol Hill in Washington, calling for sanctions against the Cambodian government. (Screenshot: The Cambodia Daily)

About 200 supporters joined former opposition leader Sam Rainsy on the U.S.’s Capitol Hill calling for sanctions against the Cambodian government.

The U.S. House of Representatives passed a bill this week that would impose visa restrictions and freeze the U.S. assets of Cambodian leaders deemed complicit in the devolution of Cambodian democracy.

The bill, H.R. 526, still needs to be passed by the Senate and signed by the president before it would take force.

“This act is really important for our country. So we are really happy,” said an anonymous supporter in a video posted to the Cambodia Daily website.

“We are enraged,” said another supporter in the video, who gave her name as Susie. “We have learned that Hun Sen is now scared of us because we have pushed for H.R. 526.”

Rainsy claimed the bill would force the Cambodian government to consider a restoration of democracy.

“We welcome this good act, which will be effective because it affects the interests of the dictator,” Rainsy said during the gathering on Wednesday U.S. Eastern time.

Mu Sochua told VOD in a written message on Thursday that party leaders had spoken to the Senate Foreign Relations Committee, whose members told her they would speed up their work on the bill.

Government spokesman Phay Siphan said the U.S. bill aimed to “destroy Cambodia’s honor,” and said the Cambodians rallying outside the U.S. Capitol were against Cambodia’s development.

“That group is not a group that shares happiness and pain with Cambodia,” Siphan said.

“A single decision from the U.S. will be O.K. on its own, but with that bill the United States could convince other Western countries to follow,” Nee said. “This is my concern, and it will make Cambodia a lonely country.”