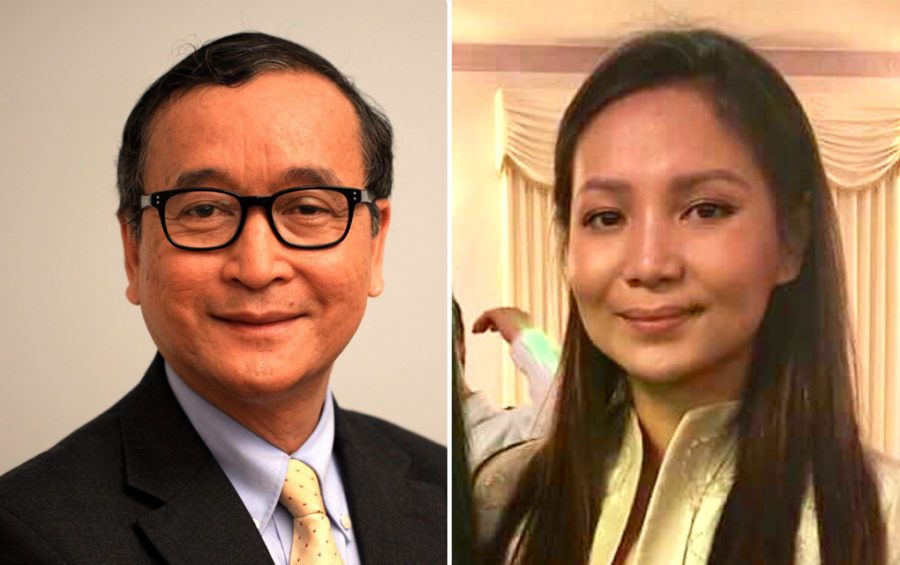 “There is no real plan for any senior CNRP official to return to Cambodia on November 9,” Kem Monovithya, the CNRP’s deputy director-general of public affairs, told VOD on Sunday.

“It’s just another PR stunt by those who have done nothing in the last two years other than creating these PR gimmicks to stay in the news,” she said in a message. “They treat the media and their supporters as fools, time after time.”

Monovithya, who lives in the U.S., was among 118 senior CNRP leaders who were banned in November 2017 from participating in political activities for five years by the Supreme Court. The court dissolved the CNRP in November 2017 after Sokha was arrested and accused of attempting to overthrow the government with U.S. support. He denies the charges.

Rainsy has lived abroad since 2015 to avoid a number of criminal convictions, which he says are politically motivated.

He told VOD in an email on Monday that it was not “worth responding to the attack” from Monovithya.

In a follow-up email to VOD, Rainsy added that as within any organization, including political parties, “different or even conflicting views” could exist, but there were democratic rules to resolve internal conflicts.

“Concerning the CNRP, in the absence of its president Kem Sokha, any important decision rests on the party’s three vice presidents and its 26-member permanent committee,” Rainsy said.

“All the recent strategic decisions were adopted by two vice presidents (Mu Sochua and Eng Chhai Eang) while the third one (Pol Ham) told us that, being currently in Cambodia — meaning under Hun Sen’s threat — he could not express his opinion,” he said.

Fifteen of the 26 permanent committee members supported “recent strategic decisions” made in the U.S. since December 2018, he said.

Sochua, who also lives abroad and has vowed to return to Cambodia on November 9, declined to comment on Monovithya’s statements.

Monovithya said the CNRP leaders’ announcement of the promised return had implied that Rainsy is the “one and only savior of Cambodia.”

“The fact that anyone is even debating this is his victory and intended outcome. So every time he teases the media and his supporters of his ‘return’, the goal is to get people to talk about it to suggest relevancy,” Monovithya said.

Katrin Travouillon, a researcher of Cambodian politics and lecturer at Australian National University’s Coral Bell School of Asia Pacific Affairs, said she agreed with the statement.

“Without an army and without his party, Rainsy now fully relies on emotions as a political resource. His provocations are aimed at building up public resentment. It is a desperate and dangerous strategy,” Travouillon said.

More than 30 CNRP members and supporters have been detained since mid-August when Rainsy announced that he would return to Cambodia. Many have been charged with plotting an attack in connection with their support for Rainsy’s promised return. At least two men affiliated with the CNRP — including Rainsy’s former bodyguard and an ex-CNRP commune chief — were left bloodied by unidentified assailants in daytime attacks.

“The PR stunts sadly and tragically resulted in those arrests and attacks,” Monovithya said. “The ‘leaders’ who made the stunts for relevance don’t pay the price, but the poor grassroots [CNRP supporters] do.”

In February, the European Union launched a review of Cambodia’s access to its “Everything But Arms” (EBA) duty-free trade scheme, saying “there is evidence of serious and systematic violations of core human rights and labour rights in Cambodia, in particular of the rights to political participation as well as of the freedoms of assembly, expression and association.”

The outcome of the review is due in February 2020.

A European Commission spokesperson said in an email on Monday that Cambodian authorities had been “made aware” of the progress that was needed to keep the EBA privileges.

Travouillon said that in the past Hun Sen and his government have “regularly succeeded in making small concessions for big returns in engaging with critical Western donors and governments.”

“Releasing Kem Sokha to retain the EBA seems to fit this strategy,” she said.

Monovithya said the E.U. had made it “crystal clear that Kem Sokha’s release is key” so it was up to the government to decide whether to respond to the E.U.’s recommendations.

But in June this year, ruling CPP spokesman Sok Eysan dismissed E.U. calls on Cambodia to “show real, credible improvement” on human and labor rights if it wanted to avoid losing the EBA.

“We have done nothing wrong, so I don’t think we need to do anything,” Eysan told RFA’s Khmer service, adding that the government was reforming to “compete with free export markets … when the EBA is lifted.”

The CPP spokesman said the EU’s “intention” was to force Cambodia to release Sokha and revive the “dead opposition party” so it could “join future elections.”

CNRP leaders have said their goals include securing Sokha’s release and a genuine dialogue between the CPP and the opposition, as well as leading an arms-free “people-power” movement that could force Hun Sen’s resignation.

While Sochua told VOD last week that there were no backchannels of communication between the ruling CPP and the CNRP, neither Rainsy nor Monovithya directly answered questions about whether government officials and the outlawed opposition were in contact about the terms of a possible release of Sokha, which could allow Cambodia to maintain the EBA agreement.

Monovithya said the question missed the mark and that there was no point in Phnom Penh negotiating with the CNRP.

“There’s no reason for the [Cambodian] regime to talk to anyone from the opposition now when it’s the EU that holds the whip,” she said.

“The EBA agreement is between the CPP government and the E.U. Whatever action the E.U. takes is based directly on the regime’s behaviors in respecting the terms of that agreement,” Monovithya added.

“Why would the regime ‘deal’ with the opposition?”

The World Bank has said that the impact of Cambodia losing its duty-free access to the European market could be at least $514-654 million. Suspension could result in garment factory closures and layoffs, affecting hundreds of thousands of workers in the sector.

For the CNRP senior leadership who has promised a homecoming, being stopped at Cambodia’s border was the best-case scenario, both Travouillon and political analyst Ou Virak said.

“If they board a plane and the Cambodian authorities deny this plane permission to land, it will demonstrate their commitment and provide them with the narrative they need,” Travouillon said. “The question is: Will the Cambodian government do them this favour?”

Virak predicted that November 9 would be “an uneventful date.”

Monovithya’s assessment of the slim likelihood of Rainsy’s return was “mostly accurate,” he said.

“I think Sam Rainsy likely won’t be coming to Thailand. He will use the hype to energize his base in South Korea. My guess is that is where he will land a week or two before” November 9, Virak said in an email.

He predicted that Sochua may try to enter Cambodia over a land border and could be stopped in Thailand, but he doubted Rainsy or vice-president Eng Chhai Eang would try the same thing.

“The likely scenario is there will be confusion of what has been truly happening with all these figures but none of them will end up in Cambodia or Cambodia’s jails,” Virak said.

Regarding Monovithya’s critique of her party’s senior leaders, Virak said her statements were no surprise. Her views have been well known publicly, he said.

“Most opposition observers would notice all these barrages of back and forth between the Sam Rainsy and Kem Sokha camps,” he added. “They have been equally brutal against each other as they are with the ruling party.”