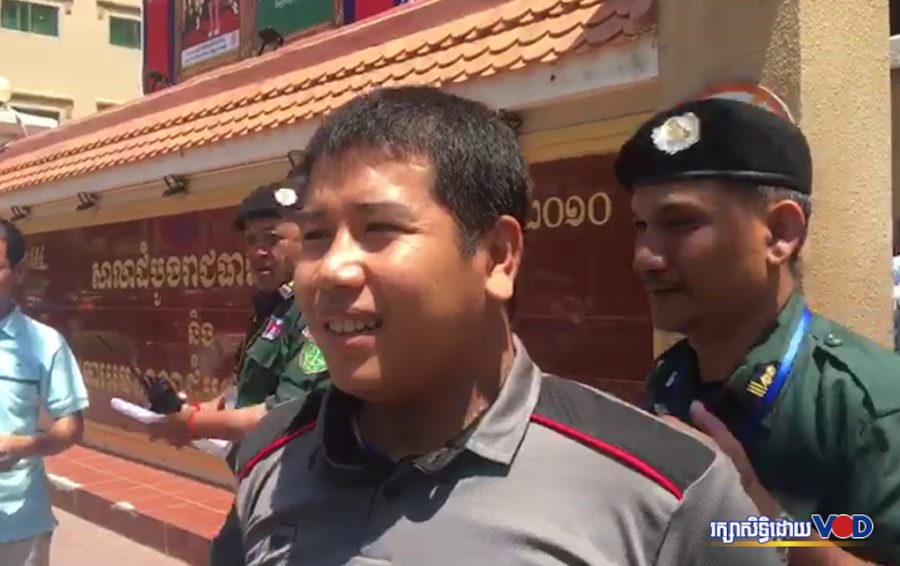 Raiya, who spent 18 months behind bars from 2015 to 2017 for a Facebook post calling for a color revolution, had promoted a batch of T-shirts online to commemorate the three-year anniversary of the popular government critic’s killing.

Ley’s words were printed on the back of the shirts: “If you do nothing, you will certainly suffer; it is just not your turn yet.”

Municipal police chief Sar Thet told VOD that Raiya had obviously failed to learn his lesson despite being once thrown in jail already.

“You already know the meaning. It stated that later on it will be our turn,” Thet said. “It implies that authorities organized a plan to kill people. This is damaging. It causes chaos and instability in society.”

Speaking to reporters as he was escorted from the court this morning, Raiya said the charge was unjust, but he was not worried.

“It is unjust, and it is extreme,” Raiya said. “But the person who is mistreating me is the one who sleeps with fear.”

Am Sam Ath, monitoring manager for rights group Licadho, said Raiya’s arrest showed how much the government was still concerned about Ley’s legacy.

In the days and weeks before his death, Ley had been posting a series of parables containing thinly disguised criticisms of the country’s top leaders. He was also urging an investigation into the prime minister’s family’s wealth.

“They seem to be scared of Kem Ley’s shadow,” Sam Ath said. “It is just a T-shirt with his image and his words. It seems the authorities are very scared.”

Ley’s funeral procession in July 2016 brought out crowds of tens of thousands, if not more, crowding Phnom Penh streets.

“What is important is that we have seen that when Mr. Kem Ley was murdered, there were millions of supporters who loved him and who demand justice,” Sam Ath said. “That has led to the fear.”

On Tuesday, police arrested Raiya, his wife, sister Kung Leakhena and brother-in-law Sok Dina, but the other three were released on Wednesday evening without charge.

Defense lawyer Sam Sokong said deputy prosecutor Real Sophin had provisionally charged Raiya for incitement to commit a felony, which carries a jail sentence of six months to two years, and his client was now in the hands of the investigating judge.

Court spokesman Y Rin said this evening that the investigating judge had charged Raiya and placed him in pretrial detention at Prey Sar prison.

On Wednesday, three others were arrested as they tried to place flowers at the Caltex gas station where Ley was shot. Two of those arrested, twin brothers Chhum Huot and Chhum Hou, have been released, while the third, Suong Neakpoan, remains in detention.

Updated at 7:22 p.m. with confirmation of a formal charge by the investigating judge.