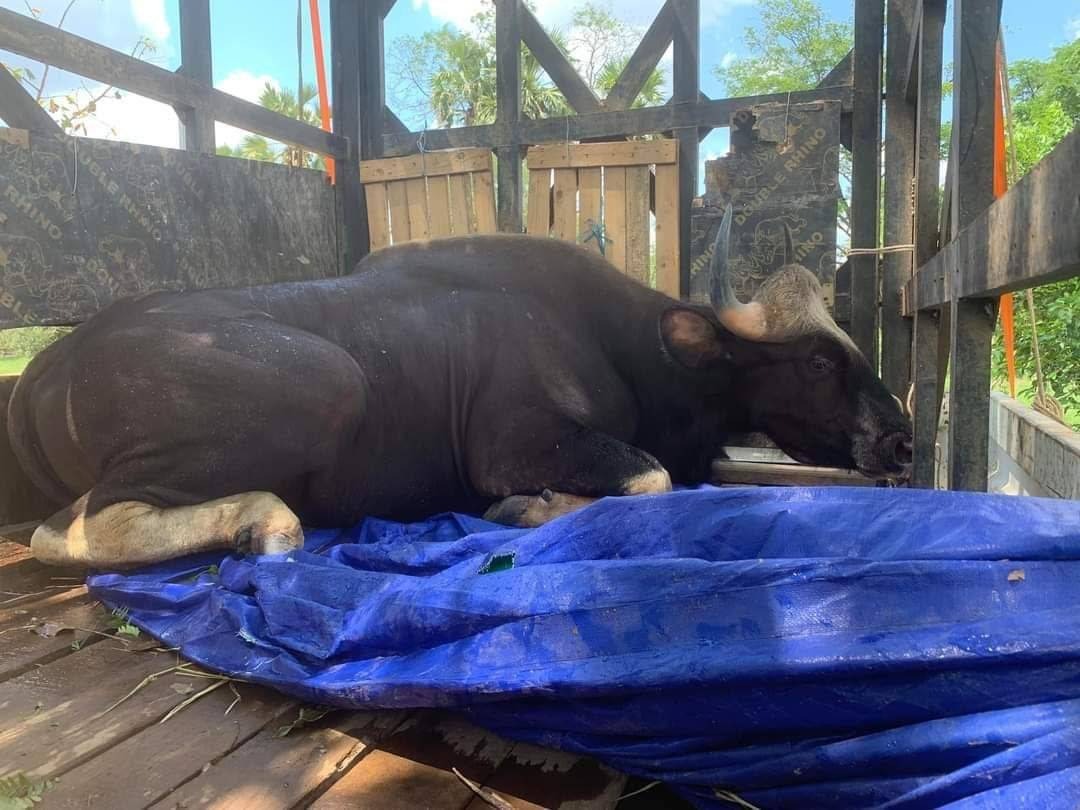 The gaur that injured three Oddar Meanchey villagers in an unexpected encounter on Wednesday, March 28, 2022. Photo supplied by villagers.

Thinking it was a buffalo, three local residents tried to kick the bovine out of their farms, Bun Ngam said.

But the animal, a wild gaur, instead charged the residents, ramming into them and sending them to hospital on Wednesday. Gaur are extremely rare, according to the International Union of the Conservation of Nature, with estimates of their numbers in the wild reaching as low as just 6,000.

Still, their powerful bodies can make them a very real, though unusual, hazard to humans that cross their path.

“In the absence of a tiger, the gaur is perhaps the most dangerous animal in the forest,” said Nick Marx, Wildlife Alliance’s director of rescue and care, on Friday.

The villagers in Banteay Ampil district injured on Wednesday were Yun Voeur, 65, who suffered an injury to his right thigh; his wife Snea Neav, 55, who hurt her right arm; and Tik Kreng, 31, who injured his right knee.

Kreng’s wife, Neap Eam, told VOD on Friday that her husband was picking potatoes in the morning when the gaur charged him.

Following the incident, the 1-ton gaur was tranquilized and taken to Phnom Tamao Wildlife Rescue Center in Kandal province.

Try Sitheng, an animal caretaker at the zoo, said the gaur arrived around 3 a.m. Friday. It seemed healthy and was eating normally, he said.

Gaurs are like cows but heavier, with a bigger body and a black coat. They usually look for food in the mornings and spend evenings with their herd, Sitheng said.

Nhek Ratanapich, the Forestry Administration director at Phnom Tamao, said the newly arrived gaur had a strong body but had suffered some slight injuries. The center was still deciding what to do with the animal, Ratanapich said.

When it comes to gaurs and humans coexisting, there may be little to do except for villagers to be wary, he said.

“It is typically violent between the animals and people,” Ratanapich said. “We cannot prevent it. Villagers should be careful. … If you see them, hurry and run away. They are dangerous.”