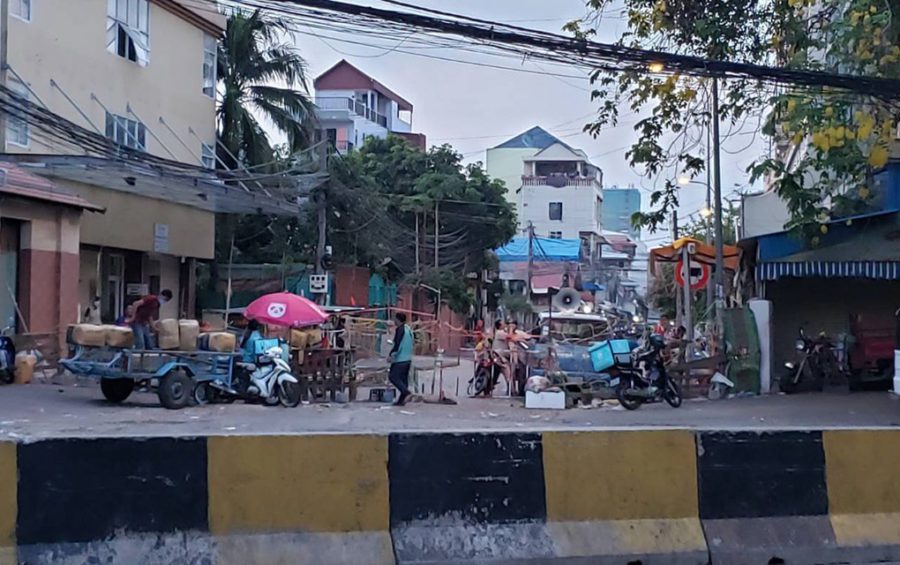 A barricade set up on Monireth Boulevard blocking off Phsar Doeum Kor commune on May 3, 2021. (Danielle Keeton-Olsen/VOD)

Only state media and journalists invited by the government can report in Phnom Penh’s Covid-19 red-zone areas, the Information Ministry said on Monday, explaining that public health was the first priority.

The government’s spokesperson unit also warned of social media users posting information “that creates unrest” amid the pandemic, and said those who don’t stop would be punished “without exception.”

Cambodia is facing its worst Covid-19 outbreak to date, leading to a lockdown in the capital and food protests in the worst-hit zones.

According to ministry spokesperson Phos Sovann, all journalists were notified over the weekend that they had been misusing lockdown reporting permits to enter red zones for work.

Some journalists contacted VOD about the notice, saying it came after their coverage of red-zone food protests late last week, and suggested that there was discrimination in favor of government-friendly outlets.

Sovann denied that the ban from entering red zones was “any restriction” against journalism. Asked if pro-government media outlets were being favored, he said the red zones were like war zones, and the state would take the risk of going in and reporting the news for the public.

“We think about public health, how infections can spread and be transmitted, and which one is the highest priority and most important,” Sovann said.

Only reporters working for state media or under the Information Ministry would receive permission to enter red zones, he said, while others can be invited by a governmental committee so they can accompany officials providing food aid or vaccines.

“Some reporters were confused that the letter that we had issued in the past to give permission for the lockdown in Phnom Penh, they could use it for the red zones,” Sovann said.

Amid Phnom Penh’s lockdown, all reporters had been required to obtain Information Ministry permits to work across the city. VOD’s application for the passes was denied.

Sovann said those earlier passes did not apply to red zones, especially under the new three-color zoning system.

On Saturday, the government’s spokesperson unit meanwhile warned about “opportunists” on social media provoking unrest related to Covid-19, and asked that they stop immediately.

The spokesperson unit’s notice added that it had “deep gratitude” toward relevant authorities participating in Covid-19 prevention.

Bun Thoeun, the editor of Khmer Social Development Online, which posts video news reports to Facebook, said he had not received any official invitation to enter red zones, but he would cautiously continue to try reporting, as some officers at red-zone boundaries would likely be understanding.

“If they do not allow us to go, we will not go,” Thoeun said.

“The future may be unpredictable with this new global pandemic,” he said. “Please pay attention to properly implementing the rules, ethics and professionalism, avoid selfishness, violations of the rights of individuals to privacy, disseminating false information, and incitement that impacts honor and dignity and causes chaos in society.”

Hun Sen, in this year’s version of the annual message, also called on journalists to work to disseminate real news to neutralize the fake.