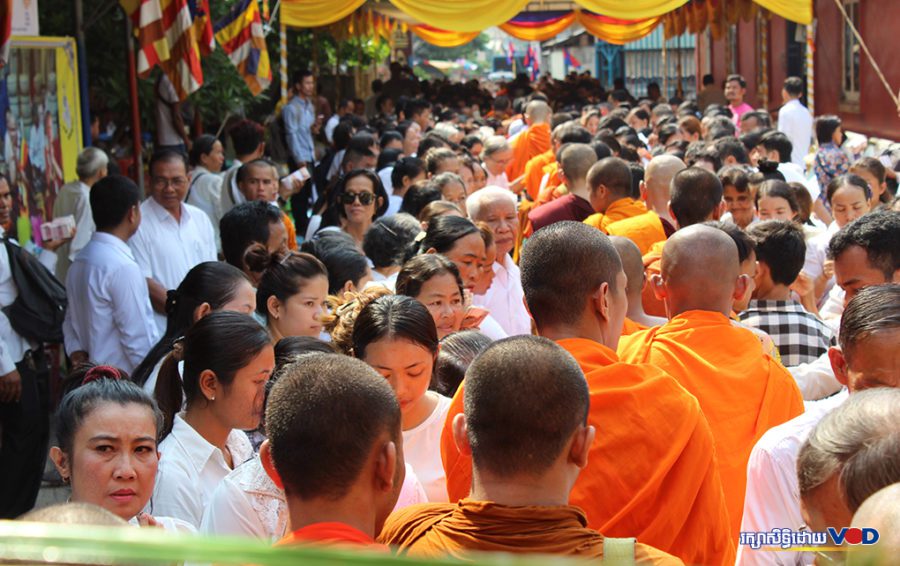 The Religion Ministry will now require pagodas to have hard land titles as part of an effort to better regulate religious institutions in the country, a move some monks said would tighten authorities’ control of monks who participate in social work.

On Monday, the ministry issued a new directive requiring pagodas to file for land registration with authorities’ assistance, as well as announcing a temporary halt to new applications to establish Christian churches.

Religion Ministry spokesperson Seng Somony said the new land-titling measure was meant to preserve pagodas’ properties and prevent “future consequences,” pointing out that pagodas have been embroiled in several land disputes with prospective developers in the past.

Somony said some pagodas had raised concerns about how hard it was to get a land title, but after the religion and land management ministries offered some instructions, “pagodas felt good and there was no problem anymore.”

Pagodas will not be required to pay for the land titles, he added.

As for the suspension of church registration applications, Somony explained that Christian churches frequently registered as NGOs due to their missionary work, and the government was planning to clarify the registration process in order to ensure that institutions applied under the appropriate laws. The Interior Ministry oversees NGOs.

This latest regulation will not impact churches that are already registered, he said, but the ministry is currently meeting to decide the future registration process as well as a procedure to re-register existing churches. That protocol will also apply to all religious groups in the country, he said.

“Some places have violated the principles, so we need to set and check whether they have implemented principles, terms and conditions,” he said. “For those who have not followed [the principles], we will instruct them to follow them properly.”

As a monk living at Phnom Penh’s Samakki Raingsey pagoda, which has been known for supporting land disputants, Yin Ratanak Sotheavy said he felt that the new land registration requirement was another way for the government to control pagodas and monks.

Even before this directive was issued, Ratanak Sotheavy said that monks known for participating in activism struggled to find pagodas that would accept them.

Ratanak Sotheavy said he was kicked out of Phnom Penh’s Chamkar Ksach pagoda after other leaders realized he had participated in the thousands-strong funeral march for political analyst Kem Ley, who was shot and killed in Phnom Penh in 2016. He was later kicked out of Stung Meanchey pagoda for continuing his observation of protests.

“When we go ask to register, they will decide whether they should give it to us or not,” he said. “When they see our names … they will only give to their network and group. I cannot find a place to stay and have to keep changing my location.”

The pagoda where he stays, Samakki Raingsey, has long been targeted by raids and accusations of “anti-government” sentiments because it sheltered land dispute victims coming to Phnom Penh to petition and protest. However, last year it was legally recognized after 22 years of unofficial status. Former head monk Thach Ha Sam Ang said he supported the ministry’s registration campaigns.

Another monk, who requested anonymity for fear of repercussions, agreed with Ratanak Sotheavy’s assessment, saying that monks who participate in social justice movements face the risk of being kicked out of their pagodas.

“This is very controversial because in our society today, the government is strengthening [its efforts] to prevent [people] from doing any activities, even monks,” he said. “When monks start to speak out, they defrock [them], so it is very difficult for monks. Every pagoda bans [us] from participating in any activism, such as protesting with villagers.”

On Friday, activist monk Luon Sovath, who fled the country after authorities ordered his defrocking over alleged sexual relations with women, was interrupted at least three times during a speech at a U.N. Human Rights Council meeting in Geneva.

The Cambodian representative to the U.N., An Sok Khoeun, took issue with Sovath’s saffron monk robes, saying a monk could not represent an NGO while wearing religious garb. After a round of comments by other country representatives, Sok Khoeun continued his protest, alleging that Sovath had committed “rape” and was a criminal under Cambodian law.

Sovath spoke for about a minute about the suppression of human rights and freedom of expression in Cambodia.

A New York Times report said in September that Luon Sovath was “the victim of a smear campaign” that relied on false claims and questionable Facebook accounts, and found evidence that government employees were involved in the creation and posting online of videos used as evidence against the monk.

Land disputes involving pagodas have frequently drawn sizable protests. Earlier this year, more than 600 citizens and monks blocked National Road 6A in Kandal province to protest a sand dredging company’s occupation of the Wat Ratanak Bopharam pagoda. Another 500 protesters turned up in support of a chief monk in Lvea Em district after a group of people sold the land he held next to Wat Sarika Keo pagoda. In Chroy Changvar district in 2013, monks and protesters at the Wat Khtor pagoda burnt an excavator as housing project developers allegedly tried to encroach on their land at night, and the pagoda later left the burnt machine standing as a monument.