Removed Families Say They Are Now Being Sued Over Relocation Site 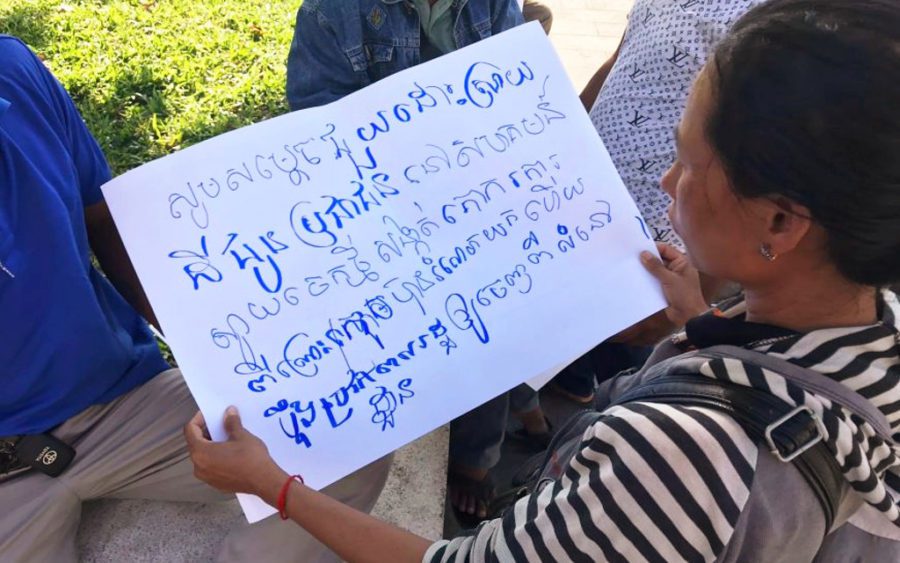 More than 30 families protested a land broker’s court complaint against them on Monday, claiming they were granted the land from Phnom Penh City Hall in a land swap 16 years earlier.

In the petition, seen by VOD, the group says they were given the land as part of a compromise with Phnom Penh Municipality in 2004. The municipality granted the area to 237 families who were among 339 families moved out of Russei Keo district’s Phnom Penh Thmey commune, the petition says, without elaborating on the relocation.

The petition adds that Sok Heng filed a complaint to the Phnom Penh Municipal Court on May 25 claiming the 33 families were illegally occupying the area.

The petition says the villagers have a map of the Svay Chek Thmey community signed in 2004 by the director of the city’s land management department, Chhuon Sothy, with approval from then-Phnom Penh governor Kep Chuktema.

Khiev Phally, a representative for the 33 families, said Heng’s claim to the land was inaccurate, as the families were living on land designated for the community. The community was granted the land after a dispute with a Chinese company over the land in Phnom Penh Thmey, though he had forgotten the company’s name, Phally said.

“Sok Heng has sued the people for illegally occupying his land,” he said on Monday. “The people did not go to steal. The people are living on the community’s land. So please, [we ask] the court and Samdech [Hun Sen] to take action against this person.”

Protesters provided a contact number for Heng, but VOD could not reach him after multiple attempts.

Phally said Kong Chamroeun, a cabinet official, had received the petition but had not made any promises.

Chea Khema, Prek Pnov district’s deputy governor, declined to comment, saying he was busy, while Phnom Penh City Hall spokesman Met Measpheakdey could not be reached for comment on Monday and Tuesday.

Vann Sophat, a project coordinator for the Cambodian Center for Human Rights, an NGO, said he had noticed a recent uptick in land disputes among residents and powerful businesspeople.

“People should find clear documents as evidence to submit to relevant ministries to help find a solution and especially [ask] the Ministry of Land Management to help check, because people claim that the land has already been reserved for them by Phnom Penh Municipality,” Sophat said.

In a separate part of Kok Roka commune, residents say developers are filling Tamok lake for their projects or to increase the amount of land on the market. Some land in Kok Roka commune is listed on realestate.com.kh for hundreds of dollars per square meter.