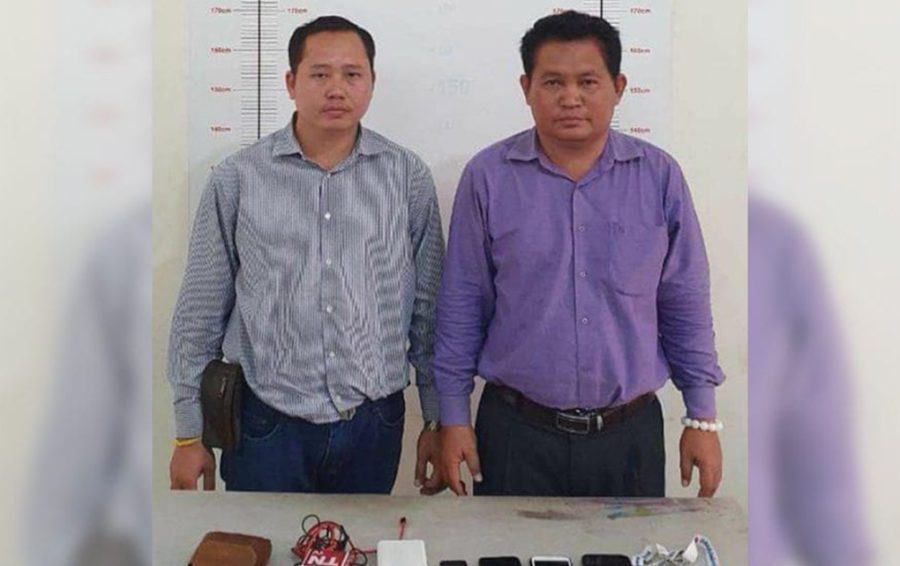 Two reporters have been arrested for incitement alongside five others detained at a land protest in Preah Sihanouk province.

The two reporters, Hun Sokha and Keo Rattana, the publishers of Facebook-based CPNTV and TN TV Online, respectively, were livestreaming on Friday as about 20 families tried to block a company’s heavy machinery from clearing disputed land, according to Su Sophary, a representative of the families.

The dispute, with the Thai Boon Roong company in Sihanoukville’s Muoy commune, has been ongoing for more than 20 years, Sophary said on Monday.

“They came to report news about the company clearing the land … and people went to stop the machines,” she said.

Military police arrived, told the reporters to stop broadcasting and arrested the pair alongside five protestors, she said.

National Military Police issued a statement saying the arrest of the reporters was based on an order from Preah Sihanouk provincial prosecutor Seang Sok, who had charged the two men with incitement because they were asking inciting questions to the gathered people.

The charge, incitement to obstruct a public official, carries a jail term of one day to one month.

The five arrested villagers were accused of appropriating private property, and are still being questioned in court.

Sokha, who is also president of the Club of Independent Journalists (CIJ), a group representing mostly very small journalism operations in rural provinces, has had other brushes with the law this year, including being sued for investigating alleged customs irregularities in Kampot province and facing legal action for reporting on a separate land dispute in Preah Sihanouk.

CIJ on Saturday issued a statement calling for Information Minister Khieu Kanharith to intervene and secure the immediate release of the reporters, saying their arrests were a serious violation of press freedoms.

Keo Ratha, the younger brother of Rattana, said on Monday that he had secured a lawyer to defend his sibling, arguing the journalists had committed no crime by reporting on the protest.

Khmer Times national news editor May Titthara said the arrests of the two men raised concerns for other reporters in Cambodia.

He appealed for their release and for an end to all persecution against reporters in order to improve press freedom in the country.

“This case shows that reporters in Cambodia are faced with potential sentences while they are fulfilling their work. We ask for their release,” Titthara said.

“We’re awaiting the investigation,” Sophorn said. “The ministry asks reporters to respect the code of ethics.”

“We followed the law. We asked the reporters to properly follow professionalism. The military police does not want to see reporters being imprisoned,” Hy said.

Adhoc spokesman Soeng Senkaruna said journalists in Cambodia faced many difficulties while trying to report on the actions of government officials and wealthy businesspeople.

“It is difficult for them to work. There is a kind of restriction on press freedom,” Senkaruna said.

In June, two reporters from the Kraing Meas website in Kompong Chhnang province were arrested after being accused of extortion by Tea Vichet, the nephew of Defense Minister Tea Banh.

On Friday, two Radio Free Asia journalists will face trial over charges of supplying a foreign state with information prejudicial to national defense.

Citing a decline in the media environment, Reporters Without Borders has ranked Cambodia 143th in the world for press freedom this year, the third consecutive year of decline.

On Press Freedom Day in May, Prime Minister Hun Sen said reporters should contribute to revealing the real situation in society, but also added that peace came first.

“Human rights need to start from the right to life. They do not start from the writing of newspaper comments,” Hun Sen said. “If all are dead, who could write a newspaper?”