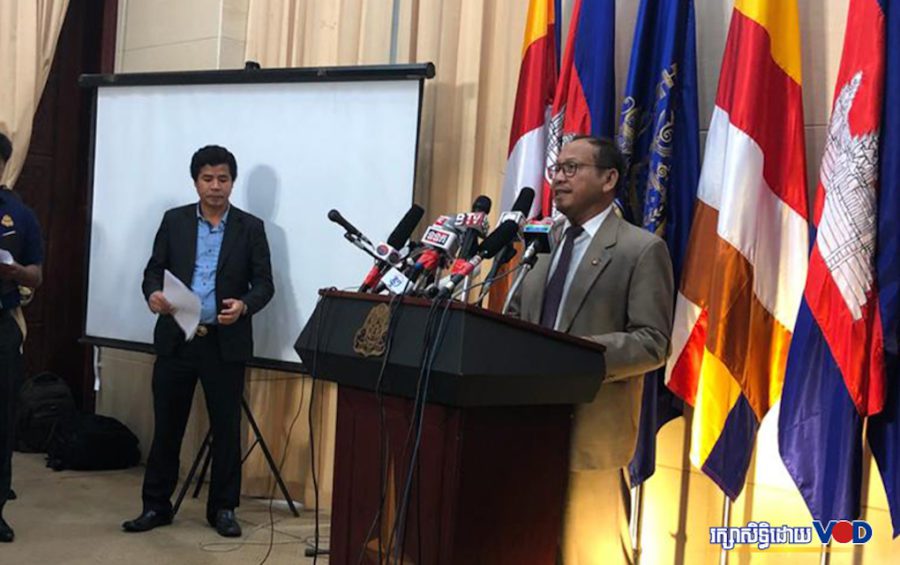 An American newspaper on Thursday stood by its reporting of U.S. claims that Cambodia had agreed to give China’s military exclusive access to a Cambodian naval base, while a Cambodian official who has called the article “fake news” invited journalists to visit the base in question.

The Wall Street Journal on Sunday reported that Cambodia and China had secretly signed a pact this spring giving China exclusive rights to a Cambodian naval installation in Ream, near Sihanoukville, and “not far from a large airport now being constructed by a Chinese company.”

The report, which cited unnamed U.S. and “allied” officials, said a draft of the agreement “would allow China to use the base for 30 years, with automatic renewals every 10 years after that,” and permit China to “post military personnel, store weapons and berth warships.”

The article did not say that the journalists had seen the agreement themselves.

Steve Severinghaus, senior communications director at Journal publisher Dow Jones, did not answer questions from VOD about whether Journal reporters had verified or saw an actual agreement between Cambodia and China, nor about whether the Journal had concerns about having published U.S. claims anonymously.

“We stand by our reporting,” Severinghaus said in an email.

In response to the Journal report, Prime Minister Hun Sen said in a statement this week that he “categorically rejects the Fake News” and considers the article “as the most ill intention[ed] against Cambodia.”

China on Wednesday again avoided an outright confirmation or denial of claims that it had struck a deal to gain exclusive military access to the Ream base, instead denying that it was “developing a military base” there.

During a press conference, Defense Ministry spokesman Wu Qian responded to a question that “mentioned that China is developing a military base in Cambodia,” he said.

The U.S. Embassy in Phnom Penh on Wednesday repeated previously raised concerns about the Ream base possibly hosting foreign military assets and personnel, and expressed worry that “a possible Chinese military presence in Cambodia would both threaten regional stability and the position of ASEAN.”

Cambodian government spokesman Phay Siphan said at a press conference on Thursday that it was the Wall Street Journal’s right to stand by its reporting, but he claimed the article — which he has called “fake news” and “propaganda” — was merely meant to help the Journal increase its market share.

“They themselves [are the ones] who destroy their own name. They are good at promoting their shares so they have to write an interesting article but we also act to make others understand that we don’t have a Chinese military base,” Siphan told reporters.

“We show our honesty and invite reporters to go [visit the base],” he said.

About 30 journalists, including a VOD reporter, were invited to visit the base in Ream on Friday.