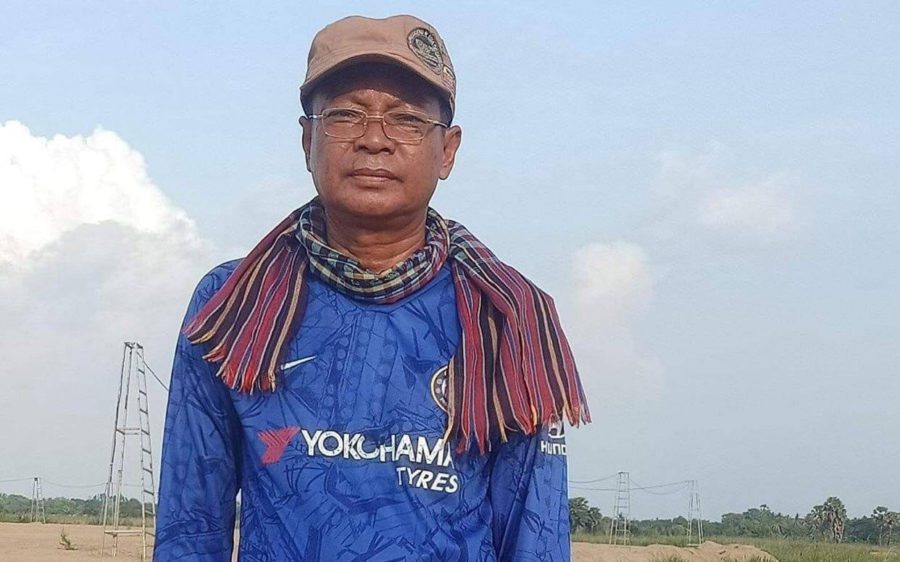 Po Rorn, 54, a representative of a community in dispute with developer Borey Peng Huoth over 58 hectares in Phnom Penh’s Chbar Ampov district. (Provided)

A representative of 241 families involved in a land dispute with a prominent developer in Phnom Penh’s Chbar Ampov district was arrested and sent to Prey Sar Prison on charges of trespassing and illegally destroying property.

The families have been locked in a dispute over 58 hectares for decades: initially with late tycoon Suy Sophan’s Phanimex, and in the past two years with developer Borey Peng Huoth.

They say they have farmed the area since the 1980s, and last month filed a complaint to the Land Management Ministry saying the gated-housing developer had begun filling in the disputed wetlands.

Po Rorn, 54, was taken away by officers in civilian clothes around 7 a.m. Friday while he was at a cafe near his house in Prek Thmey commune, said Chheun Phalla, another representative of the disputants.

Rorn was first taken to the Interior Ministry, then to the municipal court around around 3 p.m., and finally sent to Prey Sar Prison after about an hour of questioning, Phalla said.

“They arrested our representative, so almost everyone is afraid. We don’t know how to protest or what we can do. [We are] always scared and concerned of our own safety,” he said.

Rorn had been accused of trespassing and destroying property — the same charges as previously brought by tycoon Sophan when she was still alive in 2016, Phalla said.

Another representative for the families, Mao Sophearith, who was at the court questioning on Friday, said the accusations were related to the old dispute with Phanimex.

Chbar Ampov district police chief Mao Soeuth confirmed the arrest, but said he had no further details. “I do not know either. I implemented an arrest warrant with the criminal department.”

Rorn’s wife Nhev Savath, 42, said her husband farmed more than 0.16 hectares of land that he inherited from his parents.

Savath denied that her husband could have been involved in any recent property damage, as his health condition was not good and he had been staying at home.

She was concerned about her husband’s high blood pressure and diabetes, which required regular medication and had recently deteriorated, making it hard for him to walk.

“It’s an injustice. No warrant before arresting — they came to arrest and took him,” Savath said. “I’ve worried until my legs and my hands are weak, and I can’t do anything.”

Sou Sokchea, director of the Land Management Ministry’s inspections and complaints department, said he had helped mediate the 58-hectare dispute in 2019, but after two meetings the two sides failed to reach any agreement. He decided to let the parties settle the matter bilaterally or through the courts, he said.

“It had been silent until I heard the news,” Sokchea said.

The families have shown a Council of Ministers proclamation from February 2017 to suspend registrations and transfers of land ownership in the area until the disputes are resolved. But they claim Phanimex transferred its claims to the land to Borey Peng Huoth anyway two years ago.

The new developer began pouring sand into the area in early September, and showed residents land titles signed by the municipal administration in March, they have said.

A lawyer for Phanimex said he no longer represented the company since Sophan’s death, while a Borey Peng Huoth representative involved in sandfilling declined to be named.