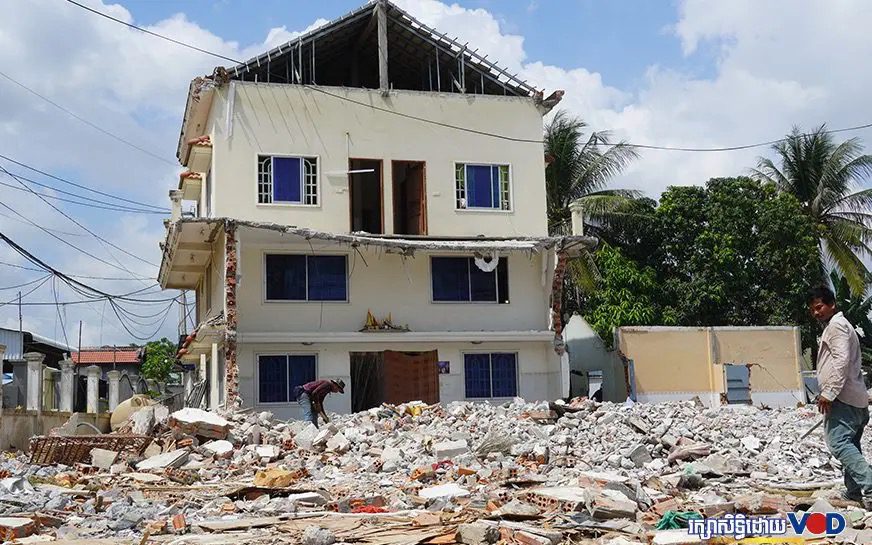 More than 200 officers demolished dozens of Phnom Penh houses to make way for the $2-billion Sihanoukville expressway, part of China’s Belt and Road initiative, as residents rejected what they said was inadequate compensation.

Ei Sok Neang said district and city security guards used excavators to destroy people’s houses one by one from around 6 a.m. Wednesday, and five people were detained for the day for trying to obstruct the clearing.

The demolition of her house began around 8 a.m., Sok Neang said.

Authorities gave her five minutes to decide whether to accept $45,000 in compensation for her two-story house.

On the market, the house in Samraong Krom commune could fetch $120,000, she said.

“I do not like this kind of action because it seems too cruel,” the 39-year-old widow said. “Coming and blocking the roads like this and using excavators to point at my house to order me to put a thumbprint to accept the compensation. I don’t do that. I could not accept it because I’ve got the bank’s loans.”

The compensation would barely cover her current loans, and she would need to find a new job as she currently relied on a small grocery store she ran on the ground floor of her house. She previously worked at a shoe factory, she said.

“I am in a lot of difficulty. I don’t have a riel, no income at all,” she said in tears. “Nowhere to live, I need to find a new place, no house to stay in.”

Another affected resident, Che Sam, said he and his daughter’s parents-in-law spent $140,000 for the property and $45,000 in upgrades. But the authorities’ compensation was half the price of the property even from six years ago, Sam said.

The first notification for demolition came in June, and he had appealed to all state institutions he could reach for fair compensation but got no response, he said.

“I have been trying my best to ask for intervention in all possible ways, asking only for compensation, not denying or protesting against the government’s development of the nation, no purpose like that. But I want to get compensation that is fair, to find a new location,” Sam said, adding that he was shocked the government would suddenly demolish the homes without reaching an agreement.

“I didn’t expect that either, by my assumption. I thought that the government wouldn’t do it like that, but when I saw it, I didn’t know what to do. Just standing and watching in tears as our own house was destroyed.”

He would file a complaint together with other residents asking Prime Minister Hun Sen to step in, he said.

Phnom Penh municipal administration spokesman Met Measpheakdey said there had been warnings and negotiations over several months, and the project could not be delayed any longer.

Less than 1 percent of families were still refusing compensation, Measpheakdey said, though he would not provide the exact number of families.

“Please understand all these points. [We’ve done] mediations, resolutions, explanations, discussions for months. This is the last option as we have no more time to delay,” he said.

Ei Sok Nou, Sok Neang’s sister who also lived on the property, said the residents who were holding out were those on the road, while residents on interior parts of the land had agreed to the $350 per square meter on offer.

“It is unfair for honest people like us who got money from the bank to build the house with only our will and blood, and it’s all we have in our lives,” Sok Neang, 41, said. “It’s like my lifeline. I depend on that place to make a living, to do business and pay the bank, because our parents had nothing.”

The Cambodian government began construction of the 190-km expressway on March 22, 2019 with a four-year construction plan and a $2-billion loan from Chinese companies.

Hun Sen warned during the groundbreaking that he would take legal action against residents who refused to accept compensation, leading civil society groups to raise concerns about potential forced evictions.

Updated at 10:30 am on November 2 to clarify comments by Met Measpheakdey.