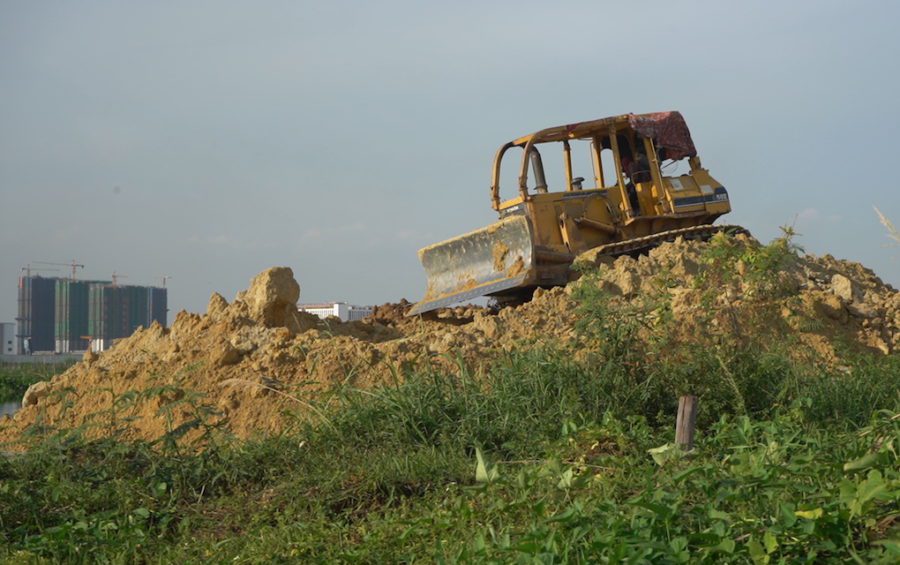 A bulldozer pushing sand and dirt into the wetlands, next to community farms in 2020 near Boeng Choeng Ek (STT)

An under-construction resort in Banteay Meanchey province allegedly began clearing an adjacent protected wetland and its flooded forests — designated as shelter for breeding fish — leading to the arrests of 11 workers, local police said.

The Stung Kampot Meanchey community has about 200 hectares of state-protected forest, where Soeung Phan, former head of the community, says there are otters, monkeys, fish and birds.

“Now it’s becoming just a big clearing,” Phan said. “We regret to lose it. When we go there [now], we see it’s become open space.”

Sorn Kim, Rohal commune police chief in Netr Preah district, said military police arrested 11 workers at the location on Sunday afternoon. Eight of them have been sent to court, he said.

The workers had been constructing gazebos by the water, and were subdividing the cleared protected area to sell, Kim said. Encroachment into the wetland appeared to have started about a year ago, and there were red spray-painted claims on marker posts around the area.

He added that he had happened upon the construction by chance.

The protected area was a shelter for fish breeding and had a stream running through it, he said. The eastern part of the stream had already been cleared, and only the western side remained.

“The protected community forest is being lost and becoming a wide open empty place,” he said, adding that it had been marked for protection about 10 years ago.

Police had the name of a couple living in Phnom Penh thought to be the developer of the resort, but police had been unable to reach them and they had no company name, he said.

Kim claimed that the local village and commune chiefs had allowed locals to sell land in the protected area to the developer.

“They’ve gone far beyond their border,” he said.

Phan, the former community head, said there were about 300 people in the village and 50 in the community. They were poor, he said, but hoped they would have seen the value of protecting nature.

“We do not know how they can sell it,” Phan said.