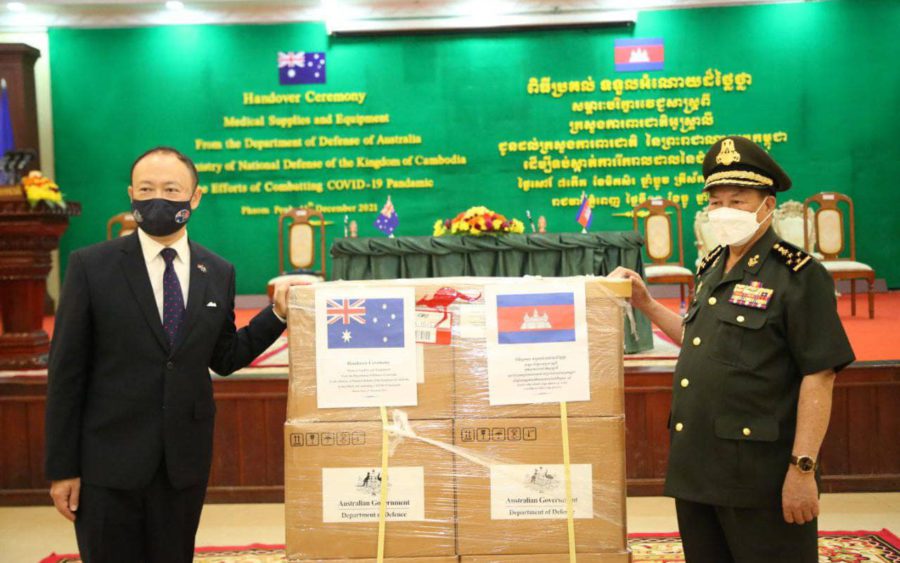 An international rights group has criticized the local Australian Embassy for participating in an event involving the military’s Brigade 70, which has been accused of being part of a grenade attack in 1997 against Sam Rainsy, among other alleged rights violations.

The Brigade 70 Facebook page posted on December 11 about a handover ceremony for medical equipment from the Australian Ministry of Defence. The photos showed Australian Ambassador Pablo Kang participating in the event.

Human Rights Watch released a statement on Sunday accusing Brigade 70 of being involved in the 1997 grenade attack against opposition leader Sam Rainsy, the beating of CNRP lawmakers and “suppression of mass protests.”

“It’s baffling that the Australian government didn’t refuse the Cambodian government’s tactic to stage a photo op with a military unit that should be sanctioned rather than used as a PR backdrop for Covid-19 medical equipment donations,” she said in an emailed response.

Environmental watchdog Global Witness has also accused Brigade 70 of being involved in illegal logging and contraband trafficking operations, with a 2007 report alleging the unit made $2 to $2.75 million dollars a year from these operations.

The Australian Embassy in Phnom Penh sent brief comments on Monday, saying the location was picked for its proximity to the Phnom Penh International Airport. It did not address questions about associating with Brigade 70 at the event.

It said the Covid-19 assistance was meant for Military Regions 4 and 5, and the Ream Naval Base, the embassy said, and that the event was presided by Defense Ministry secretary of state Moeung Samphan.

“It also underlines our aspirations for long-term defence cooperation that allows for diversity in Cambodia’s strategic relationships while safeguarding Cambodia’s independence and sovereignty,” reads a quote attributed to ambassador Kang.

Brigade 70 used to be tasked with protecting the prime minister till the Bodyguard Unit was extracted from the brigade and placed under the command of Hing Bun Heang, according to a 2014 Cambodia Daily story.

The story was corrected at 4:18 p.m. to reflect the military regions receiving Covid-19 assistance