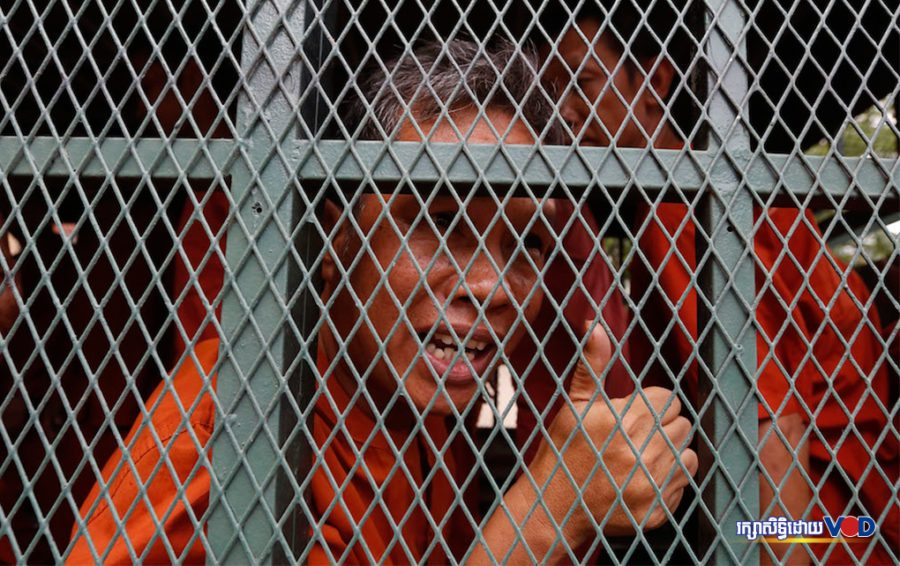 Rath Rott Mony arrives at the Phnom Penh Municipal Court on June 26 ahead of his verdict. (Supplied)

Moscow’s RT news service expressed disappointment at the Phnom Penh Municipal Court’s decision to jail a translator for two years over his involvement in its documentary on alleged child sex trafficking in Cambodia.

Rath Rott Mony, 48, was found guilty of “incitement to discriminate” on Wednesday for working with RT during the production of “My Mother Sold Me,” which tells the stories of Cambodian girls allegedly sold for sex to alleviate their families’ poverty.

Rott Mony and RT have said he acted only as an interpreter, but prosecutors claimed he had paid the families money to give false accounts.

Government officials immediately balked at the stories portrayed in the 27-minute documentary after it aired in October. Police spokesman Chhay Kim Khoeun claimed that “the documentary is a made-up story that destroys Cambodia’s culture and reputation.”

In December, months ahead of Rott Mony’s trial, Interior Ministry spokesman Khieu Sopheak had already condemned him as having “committed a crime” and declared he “will not be free.”

On Wednesday, Presiding Judge Koy Sao said he had carefully considered witness testimonies, arguments from the prosecution and defense, and answers from the accused in making his decision. He ordered Rott Mony to pay plaintiffs Tep Salin and Keo Malay 35 million riel (about $8,750) each as compensation.

While being escorted out of the courtroom, Rott Mony repeated that he had done nothing wrong.

“It is unfair to me because I did not commit [the crime],” Rott Mony said. “I will consider appealing this verdict.”

Rott Mony was arrested in Bangkok in December and extradited to Cambodia after police questioned the families appearing in the documentary.

In an emailed statement on Wednesday, RT’s press office pushed back against the government’s characterization of the documentary as “fake news,” saying RT “always upholds the highest standards in its documentary filmmaking.”

“RT is extremely disappointed with the Cambodian Court’s verdict to jail our fixer and translator, Mr. Mony,” it said.

“We fully stand by our reporting in this documentary. We were in constant liaison with authorities regarding our filming in the country and on this subject.”

RT’s assertion that it was in “constant liaison” with Cambodian authorities goes against claims made during the trial’s first hearing in May, when Judge Sao said the Information Ministry had expected the documentary to be about Cambodia’s successes following the Khmer Rouge years.

RT added that it was supporting Rott Mony’s family and working to try to end his imprisonment.

“We have been doing everything we could to help resolve the situation around Mr. Mony’s arrest, including via diplomatic channels,” RT said. “We will remain in regular contact with Mr Mony’s family and will continue to support them in any way possible.”

The Phnom Penh court’s verdict was immediately criticized by international NGOs including Reporters Without Borders, which called it “a shocking decision” arising out of a “sham trial.”

“The decision that is taken by Koy Sao, the judge hearing the case against Rath Rott Mony, will have major implications for the Cambodian justice system’s credibility,” said Daniel Bastard, the head of RSF’s Asia-Pacific desk.

Phil Robertson, Human Rights Watch’s deputy head for Asia, said the case against Rott Mony was an attempt to “cover up” the realities exposed by the documentary.

“The push to imprison Mony is an example of Cambodia playing ‘shoot the messenger’ of a person who told the international community about an inconvenient reality the government wants to hide, that the sex industry in Cambodia includes girls under 18 and the government officials are failing to adequately act to address it,” he said.

Robertson added that the charges against Rott Mony were “an affront to media freedom.”

“Ratt Roth Mony should have never been arrested, much less tried and convicted, for his actions as a local fixer and translator working on the Russia Today documentary,” Robertson said.

“The conviction of Mony should be quashed immediately, and he should be released to join his wife and young son.”

Defense lawyer Lor Chunthy was not present at the court and said he had yet to see the judge’s reasoning behind the decision.

Nevertheless, he was disappointed by the guilty verdict and sentence, Chunthy said.

He would meet with his client next week to decide on whether to appeal, he added.

“There are no facts that amount to a crime,” he said.