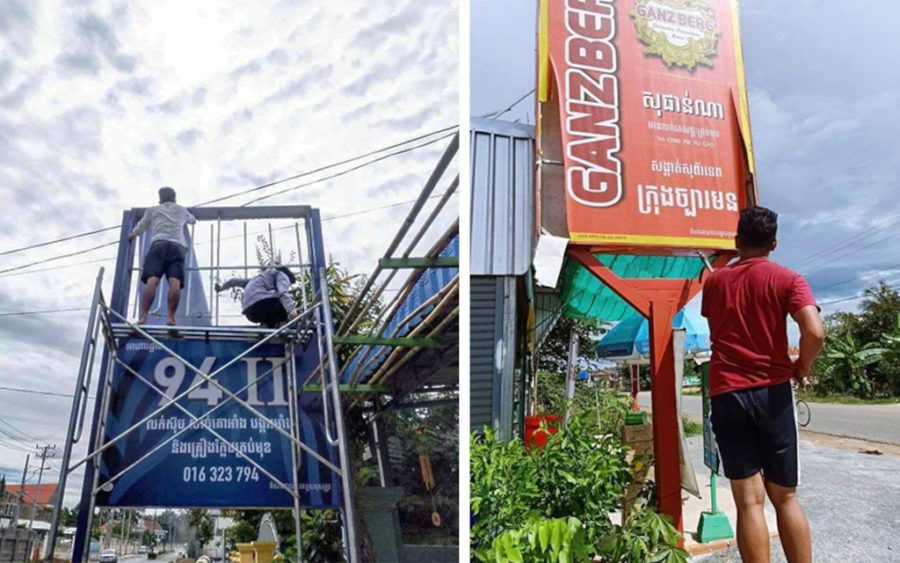 Kampong Speu business owners have about a week to pull down the beer billboards commonly found outside restaurants all over the country, as the province hopes the move will beautify its roads and sidewalks.

Provincial governor Vei Samnang said on Sunday that the measure, decided late last week, was intended to beautify the province, but did not elaborate.

“Some people have started to tear them down, and some have not done it yet. We will give them a week. If they do not tear them down, our working group can remove their promotion signs,” Samnang said.

Sok Mao, a business owner in Kampong Speu province, said he would take down the sign outside his roadside shop as required.

He said he did not think it would affect business, and it was a good initiative to tackle excessive alcohol consumption.

“Let it be done across the country,” Mao said. “Even if it were to affect [sales], [I] would still be happy regarding the alcoholic promotion signs.”

A notice issued by the provincial administration on Monday said business owners and beer companies must take responsibility for removal expenses if they did not take down the billboards themselves.

“In order to have public order and good organization, especially to improve the dignity and maintain the beauty of Kampong Speu province, the provincial administration asks that all businesses and beer-company owners who set up commercial signs in front of shops or set up all kinds of logos on public sidewalks must remove [them] immediately within one week starting from the day of notice,” it said.

A draft law on the control of alcohol, including advertising, has been drafted since 2015 but yet to be passed. The law would also set a minimum drinking age of 21, among other measures.

The Health Ministry spokesperson Or Vandine declined to comment on the draft law.

Beer advertising in the country is worth millions of dollars a year, with estimates ranging from $3 million to $20 million for television spots in 2016, according to the Phnom Penh Post.

“It should be made more broad and include a ban on promotions on radio, TV, media and other means and apply to every province, not just in Kampong Speu alone.”

Yong Kim Eng, president of People’s Centre for Development and Peace, which has conducted surveys about perceptions of alcohol, said he hoped other provinces would follow Kampong Speu.

“I welcome the Kampong Speu authority in making the right decision to protect the value of Cambodian social morals as well as the consideration of people’s wellbeing,” Kim Eng said.