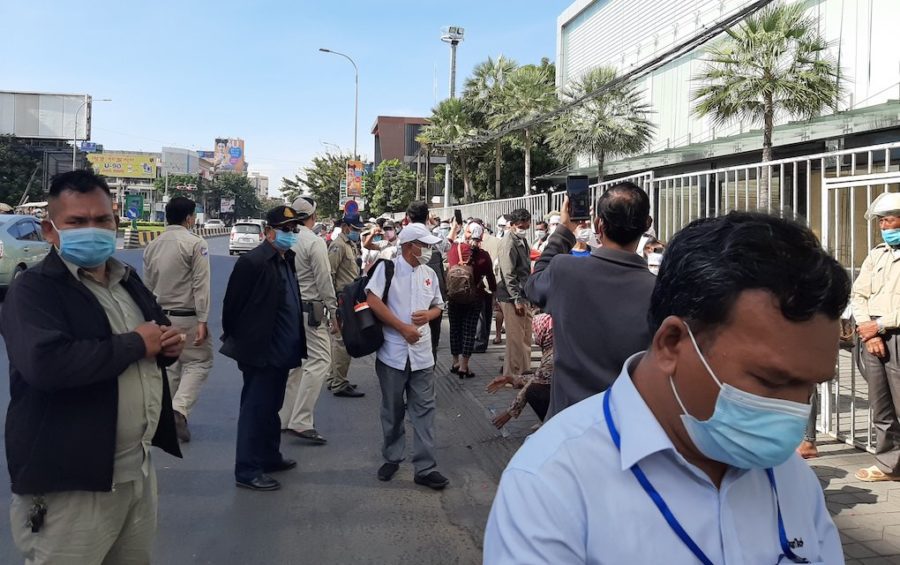 Exiled opposition leader Sam Rainsy received another two convictions and a combined prison term of four years on Wednesday alongside other dissidents sentenced in the Phnom Penh Municipal Court’s ongoing series of incitement trials against CNRP members and outspoken individuals.

Judge Ros Piseth, of the municipal court, handed two sentences for incitement to the former CNRP leader living in France, each for two years in prison and 4 million riel in fines, or $1,000. Both were over Rainsy’s social media posts, including one urging people to cease microloan payments as a form of protest.

Piseth also convicted four others who were tried alongside Rainsy.

But Buntenh, an activist monk known for campaigning against corruption and land grabs, and Tun Bunthan, a former CNRP youth activist, were sentenced to 20 months in prison with fines of 4 million riel. Both were tried and sentenced in absentia.

Buntenh was charged for criticizing the country’s chief monk, and Bunthan for posting about various political issues on Facebook, defense lawyer Lor Chunthy earlier said after their trial hearing on December 21.

The judge also handed down sentences of 18 months in prison and 2 million riel, or $500, in fines to Ouk Chhum, 74, and Lous Chenglay, 51, two former opposition members in Battambang province.

The two stood trial for a phone conversation they allegedly had in July, in which they referred to Hun Sen “dying without a coffin” and his wife “starving to death.” Chhum, a former commune chief, said he felt “very upside down” during the December 21 trial and struggled to recall details to the judge.

In a separate case, the court on Wednesday also questioned one of out of 15 activists and opposition members on trial over their reactions to the arrest of unionist Rong Chhun, whose arrest for comments about the Vietnamese border spurred a short wave of protests through August.

Among the 15 defendants was Hong Lim, a former Australian parliamentarian being tried in absentia, as well as several members of the Khmer Thavrak nationalist youth group.

Municipal court judge Tith Sothy Borachhat questioned CNRP activist Chhuo Pheng about a protest outside the same courthouse on August 12. After his testimony was read out to the court, Pheng said he was asked by exiled opposition leader Ho Vann to protest and also raise money for another CNRP activist, but he did not participate. Then both the judge and prosecutor Sam Rithy Veasna probed Pheng on whether he was connected to the youth activist group Khmer Thavrak.

Pheng denied any personal connections to Khmer Thavrak leaders, and his lawyer, Sam Sokong, urged the judge to summon the officers who had received the testimony. Sothy Borachhat closed the day’s hearing, saying he would resume the trial at an unspecified date.

“I think the competent officials are important witnesses, because authorities are the ones who create the case, the ones who send the case to the court,” Sokong told reporters outside the court on Wednesday.

One day before, the court heard a case against 21 former CNRP members who were charged with plotting, incitement to cause chaos and incitement of soldiers to defy orders. Only 13 of the accused appeared in court, while senior opposition leaders who are overseas — including Rainsy, vice president Mu Sochua and others — were absent.

Chunthy, who also worked as a defense lawyer on this case, said the trial related to the 2018 creation of the Cambodia National Rescue Movement, a Rainsy-led campaign mirroring the dissolved party.

When asked by judge Piseth whether he was mobilizing supporters to join the CNRM, Long Phary, a Prey Veng province district-level opposition party chief, said he only heard about the movement through Rainsy’s interviews with the media. Phary said he was not a part of any efforts to restart the movement, saying he hadn’t heeded any orders from provincial opposition officials since the party was dissolved in November 2017.

Phary, 58, added he had been asked to join former opposition members at the Thai border to support Rainsy’s unfulfilled promise to return last year, but he declined to join.

“I talked to [Prey Veng province’s party chief] Pen Sam Oun on the phone, [he was] asking me to gather people to receive Mr. Sam Rainsy [at the border], but I did not follow,” he said.

The court also questioned former supporter Nin Kheang — who also said he was not involved in the movement or Rainsy’s return — before adjourning the trial, which is set to resume on January 22.

Translated and edited from the original articles on VOD Khmer