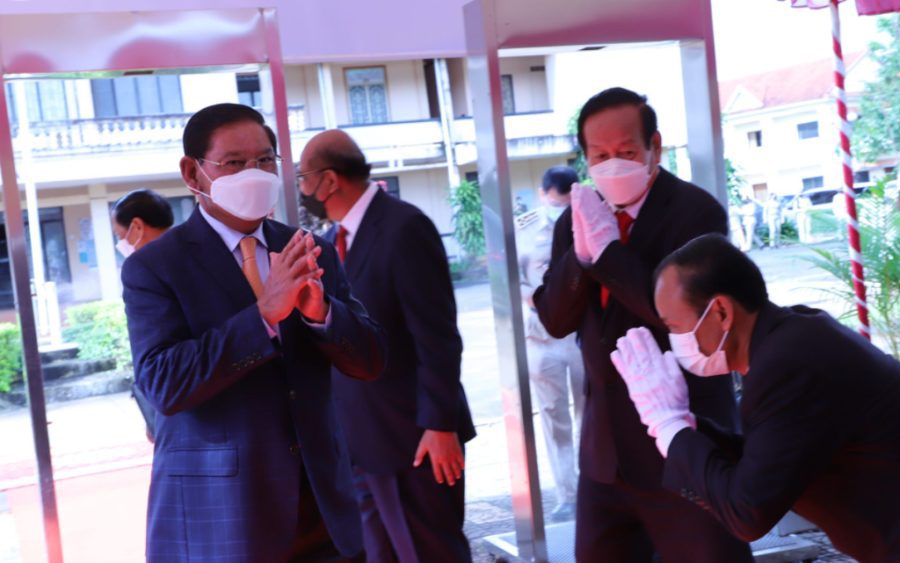 Interior Minister Sar Kheng greets officials in Mondulkiri province, in a photo posted to his Facebook page on October 12, 2021.

Interior Minister Sar Kheng advised Mondulkiri’s new governor and his officials to stay away from corruption after 10 predecessors were implicated in illegal land grabbing, but at least half of those 10 remain in their jobs. None appear to have faced disciplinary action, with a government spokesman saying there was not enough evidence to act upon.

A government investigation last year identified the officials as stealing state land through their involvement in illegal encroachment on protected forests. The province has been facing a rush on land sales and speculation likely linked to an airport development, and as boosters promote Mondulkiri for tourism, local indigenous residents have seen their lives upended.

“The past issues in our Mondulkiri province — there have been challenges related to the encroachment of state resources or public property like protected areas, land and forests,” Kheng said. “But we jointly solved them in the past.”

The problems were “100 percent or nearly 100 percent” resolved, Kheng said.

“About the case of some officials, we regret very much that they committed mistakes related to abusing their power to take land and state land because of the greed of some of our officials. And I hope that His Excellency Thong Savun, with his colleagues, continues to protect our natural resources,” he said.

“[They] must respect people’s interests, meaning the land and houses that belong to the people here. There is always information about ongoing encroachment. These are issues that I request [you] to pay attention to solve.”

However, he then moved to praising former Mondulkiri governor Svay Sam Eang, one of the 10 officials linked to land grabbing last year. At the time, Kheng asked Prime Minister Hun Sen to reshuffle Sam Eang’s responsibilities while removing the nine others from their positions. Sam Eang is now the new provincial governor of Stung Treng.

Sam Eang was transferred to Stung Treng, while Senator Noy Sron kept his job after apologizing to Hun Sen.

As of publication, only the fate of 716 Road Construction Unit deputy commander Det Hean was unclear.

Kreung Tola, a forest protection activist in Mondulkiri, backed the officials’ statements on the transfers and lack of disciplinary action.

Tola said he was unhappy the ministry had not taken action against those who had been associated with land grabbing. Encroachment will continue happening as a result, he said, adding that he hoped the new governor would be different than his predecessor.

“We hope that he will learn from their mistakes,” Tola said, alleging that many top families linked to the ruling party were involved in the encroachment of state land.

Government spokesman Phay Siphan said the officials who kept their positions in the province did so because there was not enough evidence to remove them after the Anti-Corruption Unit (ACU) followed up on the initial investigation.

“Firstly, the evidence that the ACU investigated, it was not enough, and this is very important. The ACU went there to investigate and questioned those officials. … There is not enough evidence to inculpate them.”

Correction: Sen Monorom commune’s district was amended in May 2022.