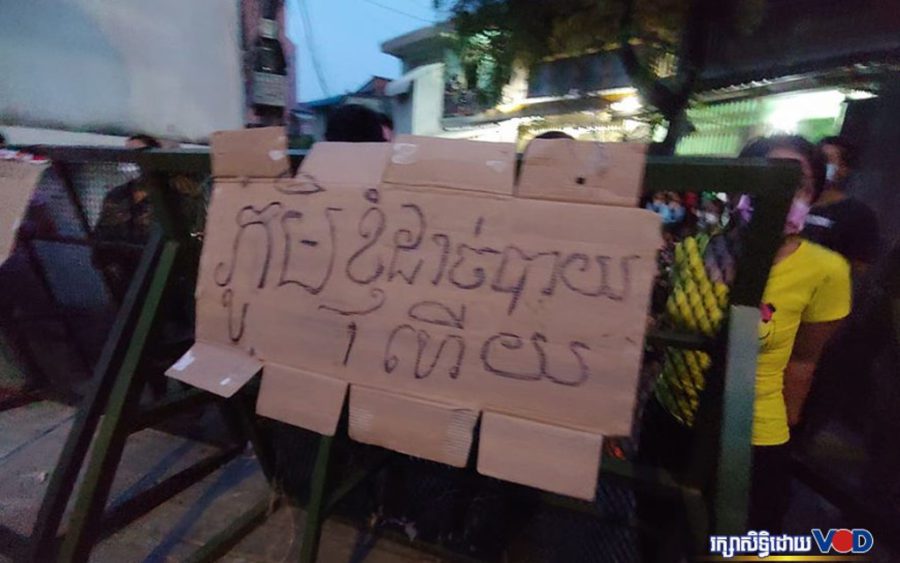 Protesters put up a sign saying ‘My village is starving’ on barricades in Meanchey district’s Stung Meanchey II commune on April 29, 2021. (Sok Chantravuth/VOD)

Another 100 people in a Phnom Penh red-zone commune protested for food aid Friday morning, saying they were fast running out of food, only hours after a separate group nearby made similar demands.

Meanchey district deputy governor Dy Rath Khemrun said the latest group of protesting families were only looking to cause trouble and were not facing food shortages. Nevertheless, authorities had given food aid to 40 families because they were out of food, but the others were managing with their stocks, he said.

Residents were seen standing at a barricade in Stung Meanchey II commune this morning in photos circulated on social media.

“If we do not block them, they will go out and cause risk by spreading the infection widely,” Rath Khemrun said. “Even though we have disseminated [information] and educated them many times, they are stubborn and want to go out.”

Just hours earlier on Thursday evening, a different group of residents in the commune protested against authorities who they claimed were not distributing food to people who were starving. The local commune chief dismissed the allegations last night and labeled them an “opposition group,” but also agreed to distribute food to them Friday morning.

Food shortages have been reported across red-zone communes, where residents aren’t allowed to leave their homes, and all business activity, including public markets, are shut down. The state has taken up the responsibility of giving food aid to those in most need, but a Telegram group set up by the government continues to get over 1,000 messages daily asking for food and essential items.

Rath Khemrun said officials had given food aid to 300 families who really needed it near the site of Thursday night’s protests. In all, 20,000 households in the district — or about half of all residents — had received food aid so far, according to the deputy governor, who added that officials were working “to make sure that donations reach the hands of everyone.”

He too alleged that protesting villagers were only looking to cause “chaos” in the commune. Khemrun said, “This was started by some ill-intentioned people who are always looking to incite and create chaotic situations.”

Moeun Samon, one of Friday’s new group of protesters, received food aid only after the protest, she said. The donation would last her family of five for about five days, and she was pleased to have food in stock.

“I am very happy that the government provides us with a donation,” Samon said.

She defended the need for food donations because most villagers were poor, and as long as they had no income they would face shortages.

“It is not easy because authorities blocked the road and we cannot go to work or do business. The local authorities know clearly who is poor and who is rich,” said Samon.

Kun Sok Kea, a neighborhood resident, claimed the area had not been receiving any aid, and said authorities had also stopped vendors from entering the area.

“Now when we go buy vegetables, groceries and food, if the authorities do not allow us, we return back,” she said.

Sek Chinda, another nearby resident, said Friday’s protests were spurred by residents seeing food donations handed out to those who expressed their displeasure on Thursday.

“The people who live next to the road got their donations this morning, but those who were a little far from the road did not get donations, so they protested,” Chinda said.

She said the government should have given people more notice before imposing the red zone to allow them to buy enough supplies.

“The government should prioritize the red zones during the lockdown, and they did not inform people in advance so that people could be prepared with food.”