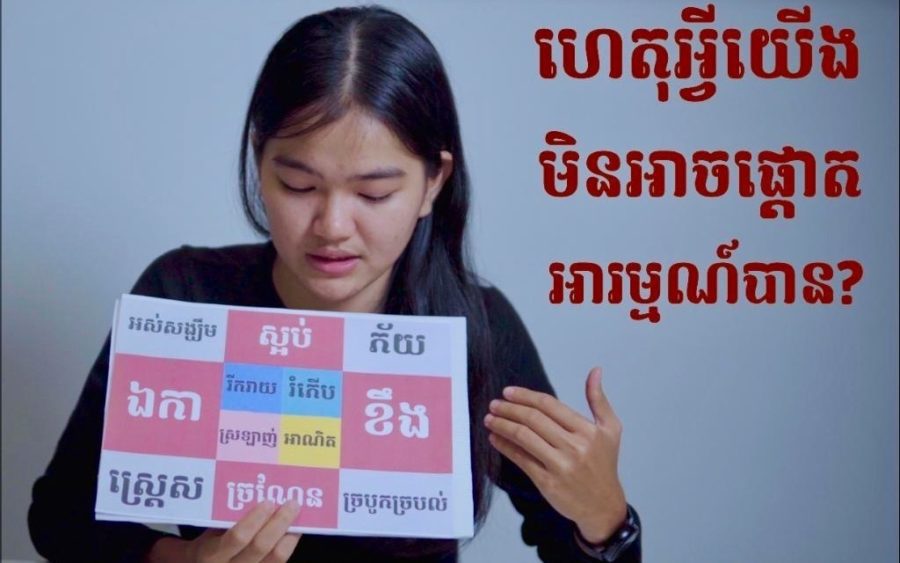 Emerging author Seng Gechly, 23, has built a following online by sharing short videos with excerpts from her three-part book series. In this still from one of her videos, Gechly talks about focus. Image provided, from social media.

Editor’s note: This is the second in a two-part series on Cambodia’s growing literary world. If you missed the first part, a special interview with author Thon Thavry, you can find it here.

You Samrang has sold books from his motorbike and a small stall since 1996, but the work has always been more than just a job to him.

Samrang says he always loved to read, and recalls rushing out from school as a boy at 3 p.m. to read magazines at a local bookshop. He would make his way through dozens of volumes, many of them filled with short stories.

“Sometimes there were tears in my eyes without even realizing it,” he says.

When he became a bookseller 26 years ago, he had few expectations. He was able to earn enough for himself, but for many years there weren’t a lot of new books coming out.

But these days, as he makes his usual route past Daun Penh Primary School, then along St. 51, carrying as usual his two full boxes of books, he is seeing something new. At 68 years old, Samrang is struck by an emerging generation of readers and writers.

Young authors are writing novels, nonfiction about business and law, and books advising readers about life and the mind. As these new titles hit the market, he says, his own sales are rising.

“There are a lot of good authors now,” Samrang says. “There’s an increase in the new generation.”

The rise of a Cambodian literary scene spans genres — and even languages — as the work of emerging authors become hubs of online communities, particularly those looking for life advice. As readers grow increasingly hungry for new content, a savvier generation of writers is finding more success with books as a source of hope and encouragement.

Most of the attendees were teenagers and university students, waiting in crowded lines to meet popular young authors and get their autographs. Bustling amid sales and promotions, the 2019 event was a mark of an emergence of Cambodian readers and writers.

“I was amazed to see the people,” said Ngorn Chhunny, 21, and a student at the Institute of Technology of Cambodia. “I had just come to study in Phnom Penh at that time.”

Reading has become her favorite pastime, Chhunny said. She draws inspiration from books and feels she understands more about the world through her reading.

Hok Sothik, co-founder of the fair and director of literacy non-governmental organization Sipar, said he had seen the event, and the wider literary scene, rise in the past decade. He says that’s largely due to growing literacy and education in the country.

In that, writers and readers are growing hand-in-hand, he said.

“If there are no readers, there will be no authors. I see that now both sides are walking in the same way. Youth like to read fiction and have a unique experience.”

For Sothik, the recent rise of the book readers in Cambodia is nevertheless only a first wave, and a sign of progress for society. There was still more room to grow, he said.

The Past and Future

That growth process will likely include a push for a more formalized market for original content.

For now, some of Cambodia’s emerging literary talents say that unauthorized copying of their work has historically made it difficult for writers to continue their trade.

Thon Thavry, 32, has watched the industry develop since publishing her first book in 2010. As the author of seven books, including the autobiographical A Proper Woman, Thavry is now an active member in Cambodia’s young literary scene.

Though she now lives out her childhood dream of being an author, Thavry says some may be discouraged by copying, a practice that prevents creators from making money through writing. Even prolific and passionate writers may struggle to further their craft when others take the profits of their work.

“When the author has this job, they cannot take care of themselves – find enough rice to fill their pot,” Thavry said. “[So] when asked whether they should keep doing this job that they like, the answer will be no, because we are starving.”

Thavry said book sellers have contributed to this difficulty.

“Some sellers do not respect the author. They’ll buy the book, then copy it to sell it themselves. When the job isn’t given value and respect, but is instead abused, how can the author be motivated to work on their creative writing? That’s one big issue.”

Despite that, Thavry intends to continue her writing career with a goal of publishing a book per year. In a special interview with VOD, she described the idea for a full-length book for A Proper Woman as stemming from an initial post on her website. When her readers responded positively to that much-shorter piece, she eventually decided to write it as a full-length book.

Other emerging authors have also found the internet as a jumping-off point for bigger projects.

Seng Gechly, 23, is one of them. Gechly had initially been studying accounting at a university to help her parents’ business. But within a year, she decided it was not for her, and left her studies.

Gechly said she had loved reading since her childhood, and that books had helped her work through her anxieties. In 2019, her own writing began to be noticed online. By then, she had already published two books as part of what would become a three-part series, Student of  Life, and took to the internet each week to post a 3-5 minute video with a small excerpt from the books.

The videos sparked a flurry of comments and messages. People told her how the videos impacted their lives and motivated them, and they asked about her writing.

For Gechly and many of Cambodia’s new authors, writing books goes hand-in-hand with building an audience online. Gechly said writing on the internet is key to reaching her audience, especially those readers who can’t afford to buy books.

“People tend to spend more time on social media​ for entertainment, especially Facebook. I don’t want them to spend that time without gaining anything. They should receive knowledge,” she said.

Outside Santhormok High School on Kampuchea Krom Blvd., Samrang, the 68-year-old bookseller, talks about having made his own books 20 years ago. He cut articles out of magazines and pasted them into books. He rewrote some parts to make it look better, and inscribed page numbers in the corners of pages.

“I didn’t use a computer. I prepared them with my own hands,” he says. “The owners didn’t complain about it. And those magazine companies have since closed down, but there are still copies of my books.”

Samrang made 12 such books, selling them for $2 each for 400-page volumes. They were used for teaching in schools, he says as he waits for customers along Santhormok High School’s walls.

A high school student comes to take a look, leafing through the pages before deciding on a novel, a love story. The 17-year-old says she also likes science fiction and books written in English.

“Sometimes they give me ideas for essays,” she says. And it’s a better way to kill time than being on her phone, she says. She has found that books are a good place to turn for inspiration.

“When I read a book I feel less stressed. It helps me with that,” she says.