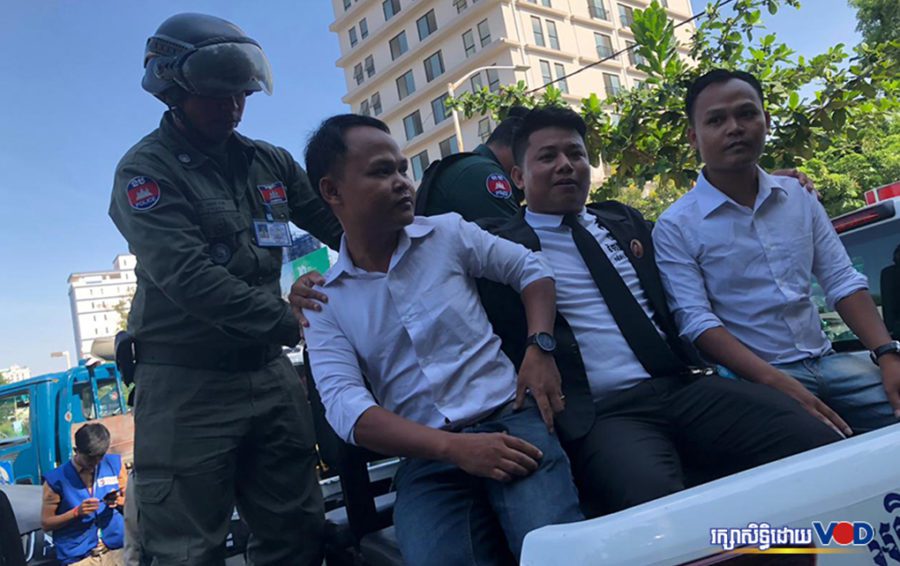 About 100 police and military police officers descended on Phnom Penh’s inner-city Caltex gas station this morning, arresting three men trying to place flowers at the site where popular political commentator Kem Ley was gunned down three years ago and dispersing any attempts to commemorate the murder.

About 40 police officers in Sen Sok district also blocked the path of about 20 members of Ley’s former political party, the Grassroots Democracy Party, as they drove out from party headquarters to attend an anniversary ceremony in Ley’s hometown in Takeo province.

The actions followed the arrests of four people who printed T-shirts in Ley’s memory, as well as the banning of at least two planned public commemorations in the provinces of Kompong Cham and Banteay Meanchey.

Authorities appeared to remain highly sensitive to the continuing significance of the three-year-old murder of Ley on July 10, 2016, which at the time provoked one of the last mass marches through Phnom Penh. Tens of thousands of people — and possibly more — filled the streets for his funeral procession.

The shooter, Oeuth Ang, was quickly arrested and found guilty of murder, but his trial left more questions than answers. Ang had recently moved from rural Siem Reap to the capital, telling his friends that he had found a job as “a soldier in Phnom Penh.” Then he shot Ley dead at Caltex’s Star Mart as the commentator — widely known for his fearless political analyses on radio — drank his daily morning coffee.

This morning, at the Caltex on the corner of Monivong and Mao Tse Toung boulevards in Chamkar Mon district, a group of well-wishers attempted to place flowers at the site even as the show of force from police blocked their path.

Two twin brothers, environmental activists Chhum Huot and Chhum Hou, and a third man, Suong Neakpoan, were arrested and driven away on the back of a police truck around 8:40 a.m. Neakpoan, a member of an opposition-aligned student group, was seen distributing posters calling for an end to extrajudicial killings.

Cambodian Confederation of Unions president Rong Chhun, who was at the scene, said the officers were overstepping their authority.

“No one organized this. They came to place [the flowers] as private citizens and individuals,” Chhun said.

Many visitors simply stood holding their flowers at the gas station when prevented from setting them down outside the Star Mart.

Across town, Grassroots Democratic Party chief executive Khat Sothy was among a small convoy headed toward Ley’s home province when officers blocked their path about 100 meters from party headquarters around 9:20 a.m.

Sothy said the officers told him that the order to halt their travel had come from Phnom Penh governor Khuong Sreng.

The motive for Ley’s murder remains largely a mystery, with the official account of a financial dispute between Ley and his shooter roundly dismissed by family, friends, supporters and acquaintances, who say the two had never met before.

Around the time of his killing, Ley was writing and posting a series of parables about political corruption in Cambodia, issuing thinly veiled and searing criticisms of the country’s leaders. It also came just days after the release of a report by NGO Global Witness documenting the vast riches of Prime Minister Hun Sen’s extended family. Ley had participated in a panel discussion about the report, urging an investigation into the family’s wealth.

A consortium of civil society organizations this week issued a statement calling for an independent investigation into Ley’s murder, with Licadho director Naly Pilorge saying it “marked a regrettable return to the killings of human rights defenders in Cambodia.”

Amnesty International’s regional director for East and Southeast Asia, Nicholas Bequelin, said the inadequate investigation and trial into the case “could be seen to protect the masterminds of this killing.”

“Fearless activists like Kem Ley only want to make their country better. They deserve justice from their government — not brazen indifference,” Bequelin said.

Justice Ministry spokesman Chin Malin, however, noted that even though the killer had been brought to justice, an official investigation was still open into whether anyone else had been involved, who provided the gun and whether Ang received any money before the killing.

Chak Sopheap, executive director of the Cambodian Center for Human Rights, said Ley was remembered for his courage to speak out against those in power.

“Kem Ley was a true man of the people,” Sopheap said. “He was unshaking in his commitment to the truth, and always continued to speak out against the corruption and injustice that was continuing to impact the lives of ordinary Cambodians. Three years after his death, his legacy continues to live in the hearts of Cambodian people.”