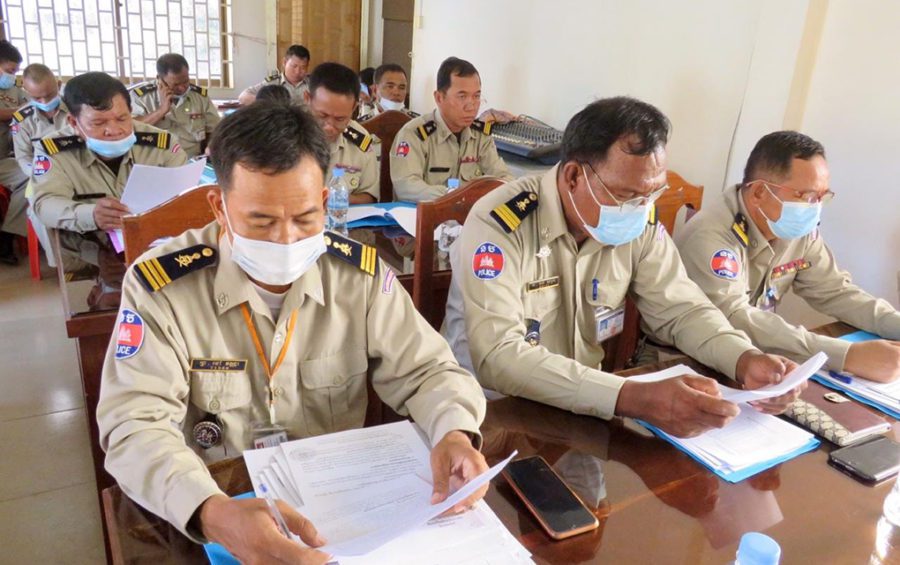 Police officers in Kampong Speu province read documents in this photograph posted to the Immigration Department’s Facebook page on July 31, 2020.

The Kampong Speu Provincial Court has questioned seven police officers after some discharged their firearms on two occasions last week while drinking alcohol outside a government building, an official said.

Provincial court deputy prosecutor Ou Phat told VOD on Sunday that he was questioning the seven officers, including Samraong Tong district deputy police chief Korng Pheary and six others, after the men got drunk at the district hall compound on August 18 and 19.

Phat said no one was injured by the gunfire.

At least six of the officers fired their weapons, while government offices were closed for the rescheduled Khmer New Year holiday last week, a police report published in local media said.

Samraong Tong police chief Khut Sophal declined to comment on Monday while provincial police chief Sam Samuon said the case was being processed and referred questions to the court.

Phat could not be reached on Monday.

On the morning of August 18, Pheary, a lieutenant colonel in charge of the security unit, used his handgun to fire three rounds outside the district hall, according to a police report dated August 20 from district police chief Sophal to provincial police chief Samuon, which was published in Khmer-language Nokorwat News Daily.

On the following day, at 6:30 p.m., Pheary along with other officers gathered again for a party where alcohol was present and used his firearm to shoot randomly at a pond inside the district hall compound, the report said.

The five officers each fired two rounds, according to the report. Phat, the deputy court prosecutor, also named another officer, Mann Bunnarek.

The police report also said that 11 bullet casings were found at the scene and Pheary was brought for questioning late on August 19 by Kampong Speu provincial police officers.