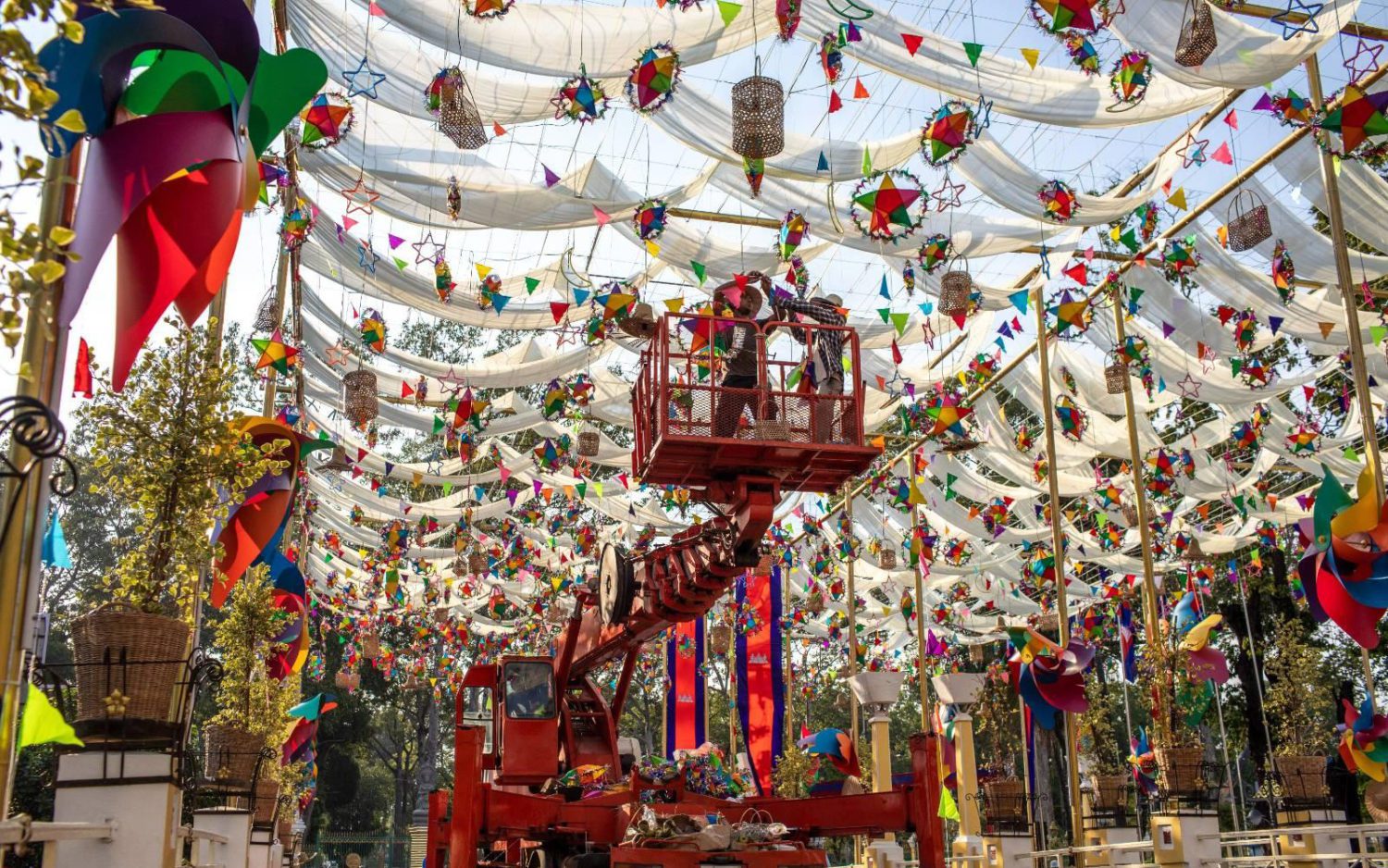 Two men use a construction lift vehicle to hang decorative stars in a tent ahead of the Sangkran festival in Siem Reap city on March 31, 2022. (Roun Ry/VOD)

Traditional games and dances, three major concerts, performances on the river, golf and boxing competitions — Siem Reap is bringing back the Sangkran festival next week, with one organizer expecting more than 1 million participants over five days.

Starting Tuesday and running through Saturday, the event will not quite be the annual Angkor Sangkran, which involves all 25 provinces, but a slightly smaller-scale Siem Reap Sangkran for the Khmer New Year — the return of festivities for the first time since 2019.

Along Siem Reap’s riverside, preparations were already underway — at the end of March, workers were placing decorative stars, bunting and lights over bridges, while others cleaned riverbanks, boardwalks and roads in the precinct.

University student Chan Thol said she was excited to see liveliness returning to the riverside.

“I see the lights, I see the lamps — we missed the gatherings for more than two years now,” Thol said. She would be attending the festivities with family and friends, she said.

Ley Lymeng, another university student, said he was helping out with preparations as a member of the Union of Youth Federations of Cambodia, hoping for a return of local and international tourists. “We are trying to make it a bit unique with boat tours in the river, dancing performances and playing Cambodian traditional games.”

The riverside is one of two locations central to the festival; the other is the Chau Say Tevoda temple in Angkor Archaeological Park.

Builder Huor Hang was working at the temple erecting a performance stage and food hall last week. He said he was expecting thousands of visitors to the facilities.

Chan Sokthon, a jewelry seller in Angkor Archaeological Park, said she was hoping for a revival of business along with the festival’s return. “I think there will be a lot of tourists,” Sokthon said.

Khum Kroeum, chief of administration at the Union of Youth Federations of Cambodia, one of the organizers of the festival, said Chau Say Tevoda temple would be called “Phum Sangkran” — or Sangkran village — and be the site of more religious and traditional activities.

The three concerts will be held at the Grand Hotel, Hard Rock Cafe and Pub Street area, Kroeum said.

The river will be full with water thanks to the Apsara Authority, which oversees Angkor Archaeological Park, having stored up water for the event. Fishing communities would be enlisted to give boat tours to help them earn an income, he said.

Boat rides would cost $2 per person for around 10 minutes from the Wat Bo bridge to the Damnak bridge, where visitors can take photos of lighting and decorations along the river.

“We are very happy to see our province start having tourists again and showing its beauty again, and the economy starts to run again. Even though it’s not 100 percent like before, it’s not zero like during the lockdown,” he said.

Kroeum said his association did not have visitor numbers for the past, so it was difficult to estimate potential crowd sizes. However, for this year “I think 1 or 2 million is a very small number. I think it will be more than that,” he said. “I’m starting to see some guesthouses and hotels start to have a lot of bookings for the Khmer New Year.”