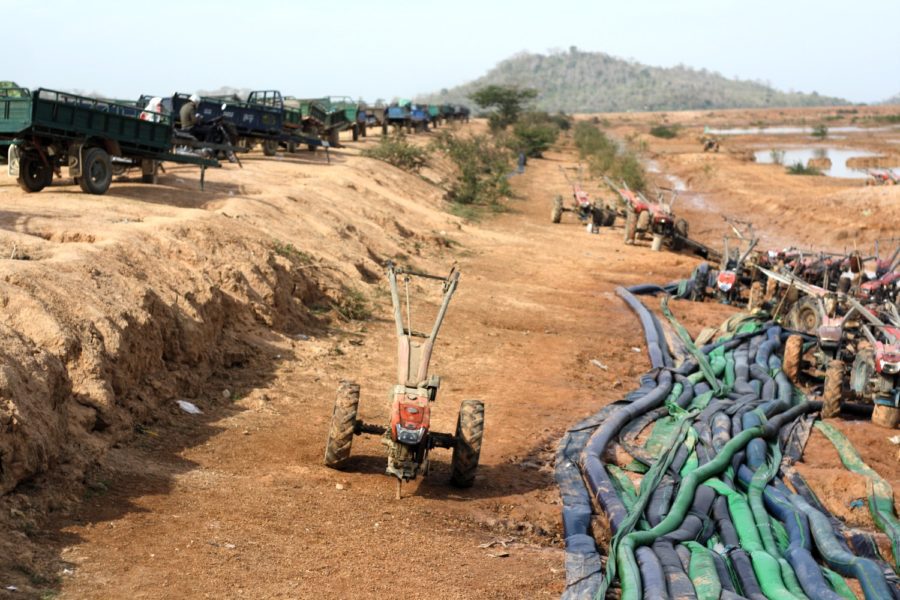 Tractors are used for pumping water from a drying reservoir in Kampong Cham province’s Batheay district on December 29, 2020. (Michael Dickison/VOD)

BATHEAY DISTRICT, Kampong Cham — More than 60 diesel tractors were running their engines all day and night to spin water pumps and suck up the mere puddles left in the area’s water reservoir.

In a day or two the current puddle would be dry, and the pumping operation would move on to find another in the mostly dried-up reservoir, said Laing Lom, 41, a farmer overseeing the work.

The reservoir served as irrigation for all of Taing Krasaing commune — about 1,000 farmers total, he estimated — but this year the Tonle Sap did not spill over into it, so the only water they had was from the rain, Lom said.

For farmers in the area, there’s little hope for this year’s dry-season rice harvest. They irrigate in desperation, but they can already see there won’t be enough water. They are bracing to write off their crops, fall deeper into debt, and maybe lose their land, several said this week.

Lom said the area’s farmers had split into groups, and took turns pumping water for two days and two nights at a time. Farmers on watch would stay up through the night to make sure hoses did not break and the engines kept running, he said.

For his group, it was a three-stage operation: pumping the puddle water first into a canal, then pumping again into another canal, and finally pumping the water into their rice fields.

“The rice is going to be spoiled. Some rice is already going bad,” Kradas said. “It looks green, but when there’s no water it will die.”

He had 2 hectares, and some of the rice might become feed for cows, he said. The reservoir usually lasted till March or April, but this year it was already close to empty, he said.

Koe Nhean, 40, said she was born in the area, and was farming 2 hectares that had been passed down in the family.

“We have no hope this year,” Nhean said. “We might have to sell our farm to pay the debt.”

It was the third year in a row of bad farming, she said.

The area’s residents blamed “dams” for the changes in the Tonle Sap.

Earlier this year, researchers pointed to dams built along the Mekong river, largely in China, as reducing river levels around the region.

China has rejected the research, while the Cambodian government has argued that it’s global climate change, not local hydropower dams, causing the changes in the region’s rivers.

Interviews with Taing Krasaing residents suggested there was also intensification of farming despite the water shortages.

“Last year we saw some people make money, so this year we followed them,” said Kradas, the 30-year-old, about using extensive pumping from canal to canal to grow dry-season rice.

Lom, overseeing the pumping at the reservoir, said there were far more machines this year than last, as more farmers adapted to the water shortage.

“We live near the water but we still lack water,” Sakhorn said. About 60 percent of families in his village had given up farming, either leaving their land abandoned or giving it to others, he said.

Fishers also had a lower catch this year, he said. “Usually at this time of the year, every house would be drying fish outside their house. But this year you hardly see it.”

On Tuesday, a mass of nets could be seen set along the entire width of the Tonle Sap for long stretches of the river.

Back in Taing Krasaing, Kon Nheam, 37, said he would look for construction work if this harvest failed.

“Everything is paid with debt,” Nheam said. “I haven’t calculated how much I owe them yet.”

Working with him, Yeth Srey Lea, 25, added: “I will become a factory worker.”