SIHANOUKVILLE — Sihanoukville’s centrally located administrative buildings are being relocated to the city’s outskirts in a move that will open up parcels of land each worth a few million dollars. 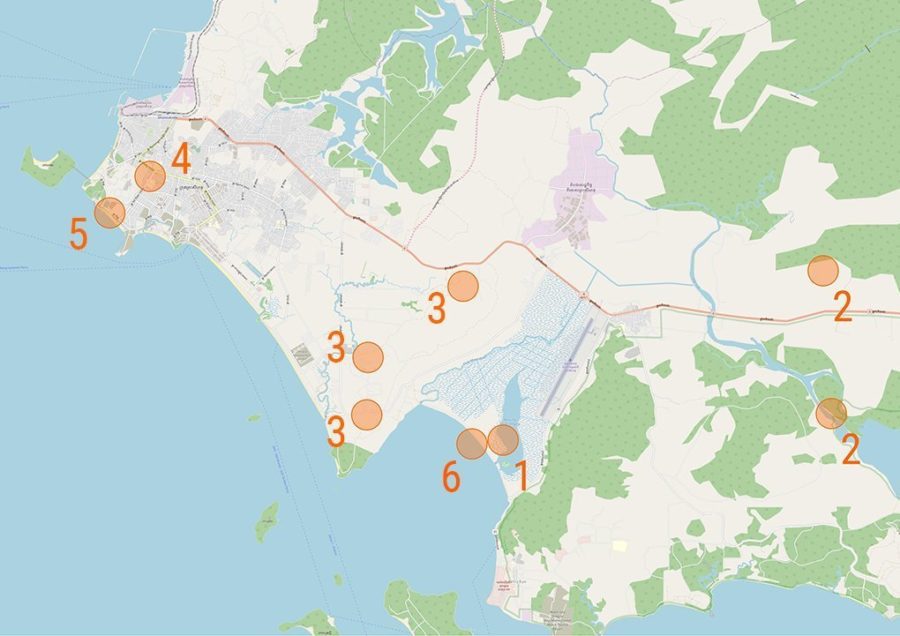 Sub-decrees about the relocations were released during the same period that the government granted expansive tracts of Preah Sihanouk’s Prey Nob district to a number of elite landowners and as the land in the province climbed in value.

A sub-decree in December 2019 freed up about 14,000 square meters of land under five provincial department buildings on the city’s 28 Mithona Street, which runs from the Dolphins Roundabout at the city center and slopes down toward the newly privatized Independence Beach.

A later sub-decree in April 2020 privatized the 4,348 square meters occupied by the provincial court building, and another in August 2020 pushed the province’s shipping and brokers building from its central spot in Bei commune’s Bei village, freeing another 3,102 square meters.

Beachfront land within Sihanoukville city is the most valuable, said Ross Wheble, the country head for international real estate firm Knight Frank, but land in the city center is still quite lucrative even after the online gambling ban and pandemic put a dent in the city’s two-year boom.

In a rough estimate, Wheble said land at the city center in Bei commune would cost between $2,000 and $2,500 per square meter. At that rate, the land freed under each provincial department could net somewhere between $4 million and $8 million each. Altogether, the seven properties freed by three sub-decrees could be valued between $43 million and $53 million.

Sihanoukville governor Y Sokleng gave a much grander estimate, saying city center land was worth around $6,000 per square meter, after the value peaked at $10,000 per square meter in 2018 and 2019. If that peak rate would return, those seven pieces of land could be worth an estimated $215 million.

When reporters visited in late November, the five buildings on 28 Mithona listed in the sub-decree were in various stages of closing. The provincial cults and religion office had been vacated, save for a cooking stove, pots and pans and laundry left to dry on a line strung between support columns, suggesting someone was living behind the governmental building.

The twin buildings of the women’s affairs department were similarly empty, as well as the planning department, but the provincial Red Cross office was undergoing some parking lot renovations, with an excavator passing in and out of the building’s gate.

Some of the buildings, namely the environment department and land department, sported fresh coats of paint and obvious occupants, while the sea-green forestry department appeared to succumb to the forest: The gated building was overgrown with trees, and when a reporter approached the gate, a large dog came running from the brush, barking and chasing the reporter away.

Though it wasn’t named in either sub-decree, a smaller, pale purple villa that held the tax department had been emptied, with a sign in Khmer, Chinese and English advertising land available for rent. As reporters passed by, two men rode together on a motorbike to the tax department to pay a bill, but they found the gate closed and no one inside the building. After looking around for some time, they walked to the still-operating treasury department next door to ask for directions.

Groups strolled in and out of the provincial courthouse, but a parking guard loitering on 28 Mithona claimed the building would eventually be moved as well.

The port building, commonly known as Kamsab, was ordered to move from its lucrative space facing the sea and a seaside resort development being built by the fast-growing conglomerate Prince Group. Kamsab appeared to be long gone by the time reporters visited at the end of November, as a Chinese business called Windmill Hotel had time to renovate the space and already board up the business.

“For this exchange, we followed the rules of the government, the decree, and such, and the location where we moved was not far from the old location,” he said. “First, it can reduce the traffic situation in the city, and second, the location helps with the work because some departments need a larger location to organize their infrastructure.”

Speaking about the decision to move the court, Justice Ministry spokesperson Chin Malin said the provincial court would relocate next to the Appeal Court, and the area would be called the province’s “justice academy.”

“Moving the court was meant to help with administration work and to make the  justice system service more convenient because it will be placed in the same location as the regional appeal court,” he said.

When reporters visited the Bei commune office next to the soon-to-be demolished cults and religions office, the chief, Sieng Sinath, 79, was unwilling to talk about the relocations, saying it was a decision made by higher-ranking officials.

Though Sokleng, the city governor, expressed confidence in the city’s land prices, much of the city has been left vacant and deteriorating after investors fled the city in late 2019 and early last year. At the end of the line of government buildings, a former casino and apartment building rose a dozen stories over 28 Mithona, empty and derelict on a red-dirt lot. The building’s paint was still a somewhat fresh yellow and the advertising signs were not yet sun-bleached, but the windows were left open to let the weather have its way with the building.

In the city’s outskirts, about 7 km from their previous location, new four-story office buildings rose around the Muoy commune office. Construction workers onsite described twin buildings as the new provincial religion and planning offices, and a block further south, the new women’s affairs department rose on the opposite side of the street.

The Muoy commune chief was also unwilling to talk about the new building, but a drink seller nearby claimed the land had been donated to the provincial government. In December, officials lauded massive cuts to the transportation budget this year, saying the government was embracing a policy of swapping plots of land for entrepreneurs’ investment in state infrastructure.