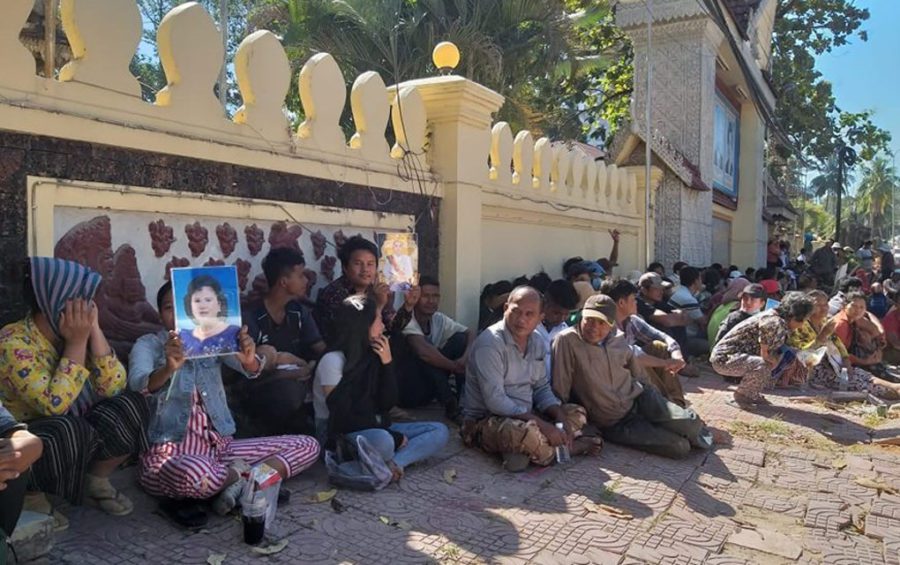 Land dispute victims in Preah Sihanouk province gather in front of the provincial hall on December 9, 2019 to deliver a petition, a day ahead of a rejected rally for International Human Rights Day. (CCFC)

The Preah Sihanouk provincial administration rejected a request from land dispute communities to hold a rally in Sihanoukville to mark International Human Rights Day on Tuesday, with a spokesman explaining that the communities are already given three days a year to air their concerns.

In a letter dated December 3, a coalition of communities claiming to be victims of land grabbing asked the provincial governor for permission to gather at Sihanoukville’s Independence Park in Bei commune and invited representatives from the administration to participate in a public forum.

The letter said the participants intended to voice their concerns and ask provincial authorities to help find solutions to their problems.

However, in a reply dated Friday, the provincial authorities rejected the communities’ request.

Therefore, there was no need to hold another forum at this time, Phearum said.

Coalition of Cambodian Farmer Community (CCFC) coordinating officer Nhel Pheap said that instead of rallying at Independence Park, participants were delivering a petition detailing their land-dispute grievances to the provincial hall on Monday instead.

However, one community representative, Your Veasna, said he and some other leaders were not participating in delivering the petition due to fear of arrest.

Pheap, of the CCFC, claimed that those named on the letter requesting permission to rally had been put on a “blacklist” and would face arrest if they showed up. Phearum, the provincial spokesman, rejected the accusation, saying authorities follow the law and had made no threats.

Veasna said the protesters should be allowed to celebrate Human Rights Day.

“We all need to demand all of our rights, and if they don’t respect our rights, they are restricting our rights to expression and to hold public gatherings,” Veasna said. “It’s very much an injustice.”

Licadho monitoring manager Am Sam Ath said his NGO was facilitating Human Rights Day rallies in 11 provincial cities, and Sihanoukville was the only gathering that had been denied.

He noted that Cambodia was currently under scrutiny from the international community about upholding human rights, and it was unfortunate that local authorities, at least in one case, appeared to have failed the test.

The E.U. is currently reviewing Cambodia’s duty-free trade access to the European bloc over political and human rights concerns, and is due to make a final decision in February.

“European communities are paying attention to see in what ways Cambodia will improve. The government, especially at the national level, is setting up measures and policies to promote human rights better, but local authorities seem to be going in the wrong direction,” Sam Ath said. “Restricting people’s freedom to participate in Human Rights Day could tarnish the government’s image.”

In Phnom Penh, several civil society groups have planned a rally at the relocated Freedom Park — once in the city center but moved to the outskirts in 2017 — with about 2,000 participants.

Nay Vanda, executive director at the Cambodian Human Rights Action Committee, said he had received approval on Tuesday from City Hall and the Interior Ministry to hold the gathering.