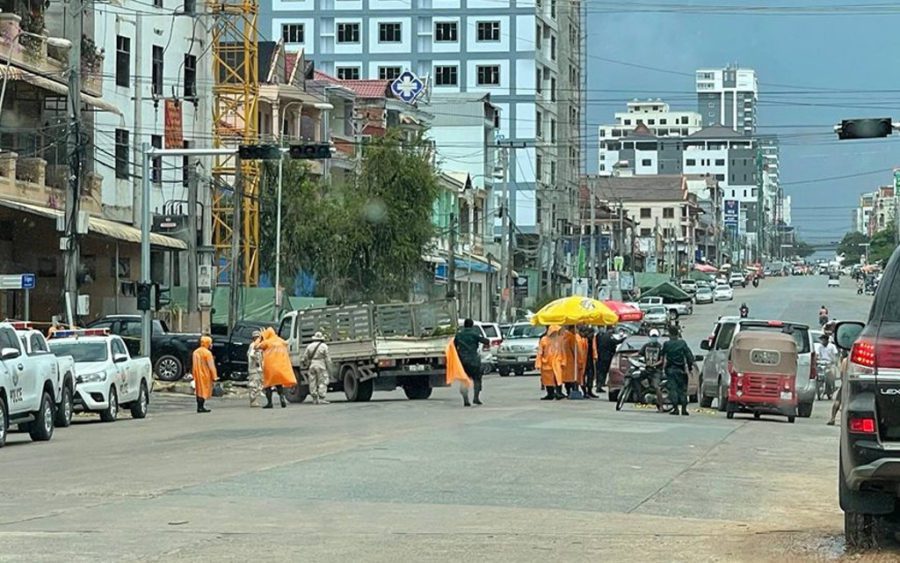 A roadblock in Sihanoukville, in a photo posted to the Facebook page of the Preah Sihanouk provincial administration.

The announcement preceded a new countrywide record for daily cases. The Health Ministry on Friday afternoon announced 655 new cases, most of them in Phnom Penh and 133 in Preah Sihanouk province.

Preah Sihanouk provincial authorities on Thursday announced the lockdown of the whole city for 14 days, with five villages put in the red zone.

Preah Sihanouk governor Kouch Chamroeun put the port city in lockdown, according to the April 22 directive, and designated five villages in Buon commune as red zones. Previously, the province had already put a travel ban in place, preventing people from entering or leaving the province.

All movements, except essential services and medical emergencies, are banned under red zone regulations, and businesses, including markets, are shut down for the duration of the restriction.

The rest of the city will have to comply with milder lockdown restrictions, including official documentation required for commutes to businesses allowed to remain open. There will be an 8 p.m. to 5 a.m. night curfew in Sihanoukville restricting all movements.

Phnom Penh also imposed similar red zone restrictions in parts of three districts earlier on Monday, with the government taking over the provision of food to residents. There have been thousands of requests for food and money from within the red zones made to an official Telegram group.

Along with the red zone notification, Sihanoukville officials released the details of 85 individuals who had tested positive in Buon commune. Provincial spokesperson Kheang Phearum said authorities had decided to enforce a citywide lockdown after previously trying to contain the outbreak within smaller areas.

“Previously, we closed the Tomnob Rolork area in Bei village in Muoy commune, Phnom Touch village in Boeung Ta Prom commune, but from the 23rd we are going to close the whole city of Sihanoukville.”

Cheap Sotheary, a provincial coordinator at rights group Adhoc, said people who lived in Buon commune were financially vulnerable after authorities shut down Phsar Leu market, where many of them sold goods. The measure would affect the local economy and livelihoods of people in the area, Sotheary added.

“They have to borrow more [money now]. So, there is new debt and the old debts have accumulated. During the 14 days of quarantine, what will they eat?” Sotheary said.

Seng Vanna lives within the red zone in Sihanoukville and is worried about feeding her family as well as paying her debts.

“I am worried about food shortages because I have a lot of children, I am poor and I owe money to the bank,” she said.

Preah Sihanouk province has reported a total of 1,194 cases of Covid-19 cases and four deaths as of Friday, according to official statistics tracked by VOD.