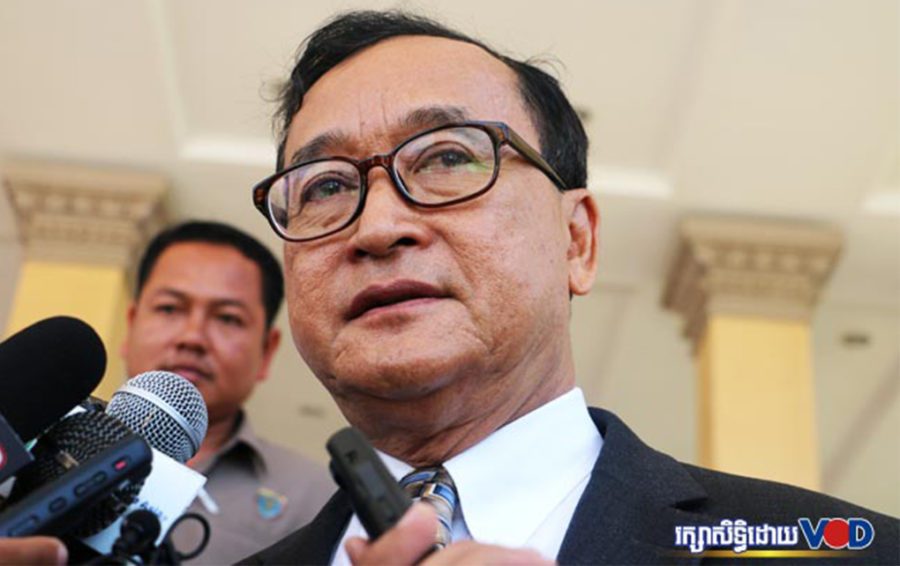 Another six former members of the outlawed opposition were arrested this weekend — at least two for plotting and incitement to commit a felony — while Interior Minister Sar Kheng has allegedly ordered authorities to monitor CNRP supporters gathering at pagodas over the current Pchum Ben festival.

Among the six ex-members of the Cambodia National Rescue Party, three are being detained in Phnom Penh’s Prey Sar prison and three in the Kandal provincial prison, Soeng Senkaruna, spokesman for human rights group Adhoc, said on Monday.

More than 150 former members of the CNRP have been questioned by police or the courts, and more than 20 have been arrested this year, Senkaruna said.

The latest arrests were likely the ruling party’s response to exiled opposition leader Sam Rainsy’s pledge to return to the country in November, he said, adding that the detentions of the ex-CNRP members were concerning rights violations.

“We are worried because we have seen the subsequent actions and the government seems not to consider nor listen to the requests from the international community at all,” Senkaruna told VOD.

“Instead, the situation is even worse while the political situation in Cambodia has deteriorated,” he added.

The CNRP was dissolved by the Supreme Court in 2017 following the arrest of opposition leader Kem Sokha on widely decried charges of treason, which he denies. Sokha remains under de facto house arrest in Phnom Penh.

The U.S. and other Western nations have criticized the Cambodian government for democratic setbacks, including a crackdown on the political opposition, civil society and independent media.

Rhona Smith, the special rapporteur on human rights in Cambodia, said in a recent report to the U.N. Human Rights Council that within a year from the July 2018 elections — which were swept by Prime Minister Hun Sen’s long-ruling Cambodian People’s Party (CPP) — the country’s rights situation remained “dominated by the repression of political rights.”

In the same report, Smith called on the government to release Sokha from detention and “conclude the investigation of the charges against him swifty or drop the charges.”

Last month, meanwhile, Rainsy, who has lived abroad for about four years to avoid a number of convictions that he calls politically motivated, announced that he would return to the country on November 9 with some 2 million Cambodian migrant workers to “take back our homes, our land and our country from Hun Sen.”

Since earlier this year, local party supporters have faced government pressure tied to their support for Rainsy’s return, including questioning and intimidation by authorities, charges and arrests.

Rights group Licadho has tallied at least 14 incidents since mid-August.

National Police spokesman Chhay Kim Khoeun said on Monday that the court had jailed the six ex-CNRP members over the weekend after authorities found evidence that they had participated in illegal activities.

“If there were no clues, authorities would not have arrested them,” Kim Khoeun said.

“If the court has no evidence and documents, the court will let them go free but for these six people, there is enough evidence … that is why the court decided to detain them,” he claimed.

The Phnom Penh Municipal Court on Saturday charged Tum Bunthorn, a former commune council candidate in Phnom Penh, and Yu Chantheany, who once presented news broadcast on Sam Rainy’s Facebook page, with incitement to commit a felony and plotting an attack, according to court documents seen by VOD. The charges carry maximum prison sentences of two and 10 years, respectively.

Both were arrested on Friday, Chantheany in Phnom Penh and Bunthorn in Siem Reap. Yat Phearum, a former member of the CNRP youth group of Svay Chek district in Banteay Meanchey province, was also arrested on Friday in the province.

Bunthorn’s brother, Tum Bunly, claimed that authorities had followed his sibling for days and arrested him on Friday afternoon at a property in Siem Reap province, which someone had earlier called Bunthorn to inquire about.

“First, [someone] called him and asked about buying land and [authorities] went to that place,” Bunly told VOD.

“One hour later, Thorn called me and told me that he had been arrested and I asked if there was any arrest warrant. He has not replied yet and his phone is off,” Bunly added.

He said it was 90 percent likely that his brother’s arrest was related to politics, because he never had problems or arguments with anyone.

“Sometimes, if they are not related to crimes or any illegal movement, they will be released, but if they were involved, [the prosecutor] will continue the procedure,” Malin said.

The dissident group will have their people go to pagodas and gather and will discuss or set up their plan. Now, we have to prepare together.

Kong Sophea, a former CNRP lawmaker who was one of two MPs beaten by members of Hun Sen’s Bodyguard Unit outside the National Assembly in 2015, called on rights and civil society groups to monitor the cases in a Facebook post that included photos of the six people who were arrested.

“This is a political threat with an intention to discourage and prevent the youth movement who dare to rise up and welcome the return of [acting] president Sam Rainsy on November 9,” Sophea said.

The Phnom Penh court on Friday again charged Rainsy for insulting the king, a crime for which he was already convicted in absentia earlier this year, over comments he made in an interview with Radio Free Asia on Thursday.

“Even our king has become a hostage of Hun Sen so he dares not do anything. He’s scared of Hun Sen,” Rainsy told RFA. “He wants to keep his throne so we put him aside. We cannot rely on the king, who is currently a puppet of Hun Sen.”

On Sunday, the CNRP released a statement outlining their plans for Rainsy’s return to Cambodia, including announcing the banned party’s decisions to have senior party leaders head to the region on November 5, prepare a fund to support defecting armed forces, delegate duties to party members in and outside the country, and appeal to overseas workers to join the exiled CNRP leaders, many of whom fled the country after the party’s dissolution.

Government spokesman Phay Siphan on Monday said he had nothing to say about the “outlaw group,” referring to the CNRP.

Prime Minister Hun Sen has promised that Rainsy will be arrested upon attempting to enter the country and said he had shared the arrest warrant with all Asean nations.

While the CNRP’s leaders prepare for Rainsy’s return, Interior Minister Sar Kheng has allegedly ordered local authorities to visit pagodas during the Pchum Ben festival to monitor CNRP supporters, after he purportedly got information that the CNRP would use the holiday period as a cover to organize an alleged plot against the government, according to a voice recording allegedly of Kheng that was circulated online over the weekend.

“Be informed that during the Pchum Ben day [September 14-28], the dissident group will have their people go to pagodas and gather and will discuss or set up their plan. Now, we have to prepare together. For me, we organize officials to go to pagodas. Partly to organize Pchum Ben and partly to manage the situation well,” the voice on the recording said.

Interior Ministry spokesman Khieu Sopheak did not confirm whether the voice was that of the minister, and told a reporter to judge for himself.

Political analyst Lao Mong Hay said the government’s actions seemed to show officials’ fear of Rainsy’s return and were meant to prevent the opposition leader from challenging the government’s power.

Mong Hay said the CNRP and ruling party should return to negotiations and find a compromise so the nation could progress.