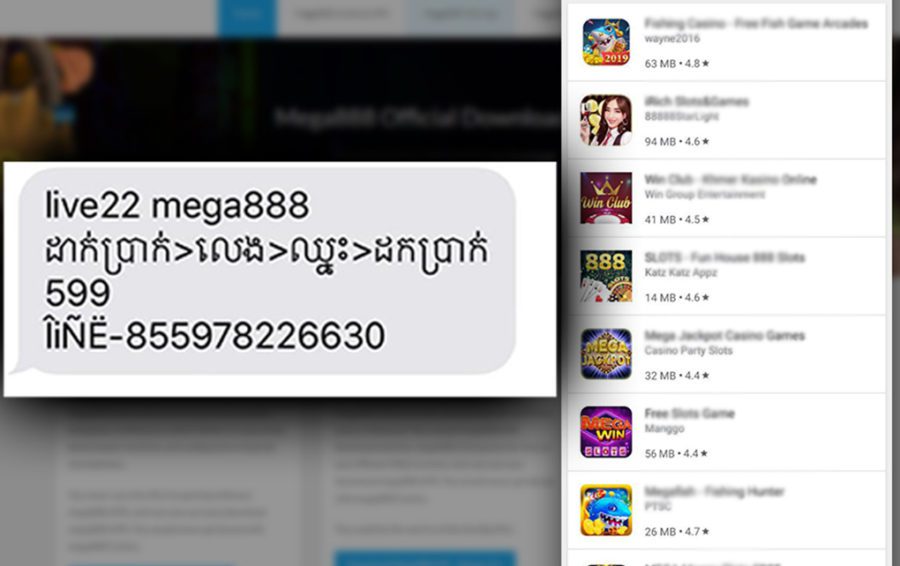 Mysterious vendors are skirting a legal ban on Cambodians gambling by promoting online gaming platforms that use mobile apps and private money transfer services such as Wing and True Money to buy and withdraw gaming credits.

In recent months, Cambodians have been targeted with an onslaught of SMS phone messages promoting the online gaming platforms. The messages provide links to download the apps on the Google Play store or iOS App Store, which then require the user to make deposits using their bank or a funds transfer service.

The promotional messages include promises of bonus credit, such as: “Online fish shooting games, deposit, play, win and withdraw the money,” “Casino game on phone, deposit money, get $5 extra” and “Phone games easy to win, get $10.”

When a VOD reporter called one of the numbers promoting the apps, a woman who answered the phone said there were many gambling options available.

“There are [games] such as fish shooting games, live card games or live football [betting] from casinos, or many others,” the woman said. “For gambling, if you win, you can withdraw the money … if you want to withdraw or deposit money, you can do the withdrawal or deposit through an ABA account, Wing or True Money.”

Phnom Penh resident Chak Chamroeun said he received the messages often and was disturbed by the frequency. But they later attracted his interest, he said.

“At first, it was disturbing but long after it seemed to be interesting, such as the provision of [bonus] credits to play and also the promotion of gambling,” said Chamroeun. “It was interesting because it seemed attractive to play.”

National Police spokesman Chhay Kimkhoeun said the emergence of online gambling was proving troublesome to police because it did not, like most older forms of gambling, require gamblers to gather together in one place.

Gambling, including online betting, is illegal for Cambodians under the country’s Law on Suppression of Gambling.

Police were trying to identify the people sending the promotional messages for the online gambling in order to eventually “crack down” on them, Kimkhoeun said.

​“For the online games, we have had crackdowns a lot already but mostly it was foreigners. Now, we are investigating to find who the sources are sending these messages to people,” he said. “We search for one, we arrest one.”

“When our investigation is done, we will start our operation but I would like to inform brothers and sisters that we will not ignore this,” he added.

“It’s just that it takes time for our police.”

Cambodian Youth Network director Tim Malay said there was good reason for the police to go after those promoting the games. He said those attracted to the risk-taking behavior of mobile gambling would be those economically vulnerable and therefore prone to turning to more severe crimes if they lost money.

“People don’t understand the fraud of these games,” Malay said. “It affects their economic benefits; it wastes their time and their resources. In addition, it can result in medium or heavy [legal] offenses — meaning that when they lose and it costs them more money, it forces the gamblers to commit other offenses.”