Some 90 Hectares of State Land in Preah Sihanouk Commune Privatized 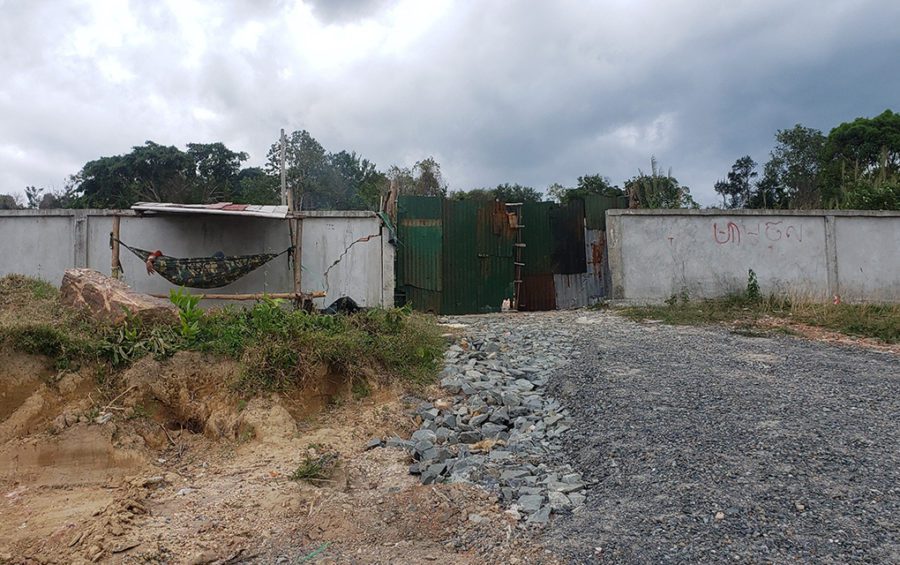 A guard sleeps in a hammock in front of fenced-off land in Prey Nob district’s Bit Traing commune in Preah Sihanouk province on December 1, 2020. (Danielle Keeton-Olsen/VOD)

In March last year, Kiri Sakor district authorities in Koh Kong province stopped what they called the “illegal” construction by Lao Annie of houses on Koh Sdech island, according to a post on Koh Kong Provincial Administration’s website.

A woman who answered a phone number for the Blueland director listed on the Commerce Ministry’s online business registry on Thursday said she was not Lao Annie. The registry shows at least a half-dozen other Phnom Penh-based companies affiliated with Annie.

According to the sub-decree, the 61 hectares was “cut from forest cover in 2002 and was reclassified as private state land.”

A company representative could not be reached through the Commerce Ministry-listed phone number on Thursday.

Bit Traing commune chief Meach Chan said the 86 hectares in question had been occupied by Fu Hai, Blueland and Annie for years.

“In the past, I have heard her name because her lawyer came to measure the border, the location used to cultivate and occupy,” Chan said. “Lao Annie has occupied [the land] since before I was a commune chief. She has one plot in Ream commune, two in Kokir village.”

The province has seen a series of state land deals reclassify valuable coastal properties as private land in recent years, to the benefit of powerful individuals, from the prime minister’s family, businesses linked to tycoon Ly Yong Phat and the Prince conglomerate shareholders, National Police chief Neth Savoeun and others.

Government spokesperson Phay Siphan said this week that areas of state land were privatized to help develop the economy, raise tax revenues, create jobs and meet public demands, including improved infrastructure that may be paid for by private firms.

“There is a need for development and there is no development without sacrifice,” Siphan said. “The Royal Government has made a partnership between the state and the private sector, and any country does this.”

“Development brings revenue to the state,” he added.

Social researcher Seng Sary said economic development should comply with environmental standards, adding that forests and national parks were important public resources that the government should conserve for future generations.

The prime minister has “full power in his hand” and it was up to him to do whatever he wants, Sary said.

“It looks like Cambodia belongs to him so he controls the forest for himself,” according to Sary. “Not only analysts but also activists have made criticisms about this, and they have been arrested for trying to protect natural resources.”