Spate of Violent Crimes Against Foreigners Nabs More Than 20 Suspects 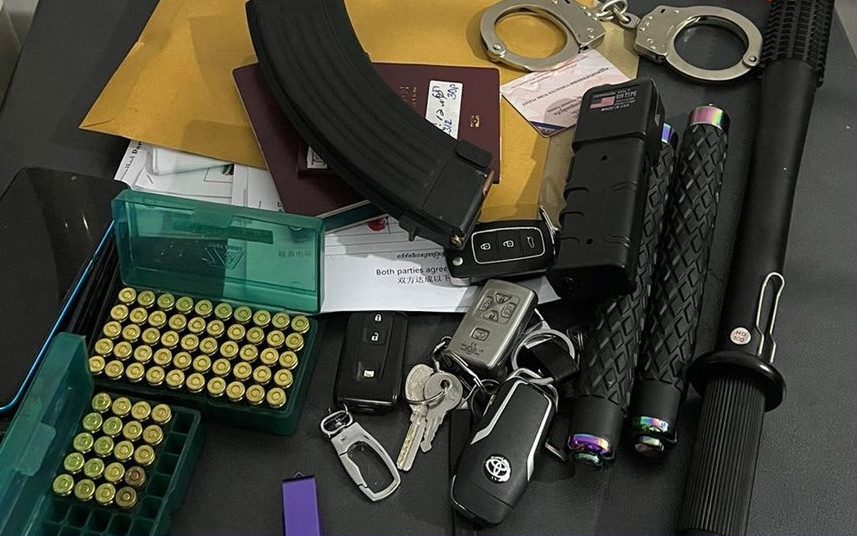 Weapons seized as part of a crackdown on 11 suspects for premeditated murder, illegal detention, extortion and illegal import of weapons in Preah Sihanouk. (National Police)

Cambodian police investigated and detained more than 20 individuals in three separate criminal cases across the country in the last two weeks, where foreign victims were kidnapped, killed, illegally detained or in one case had their tourist bus intercepted by suspects.

In the first case, Preah Sihanouk provincial police found two dead bodies at two separate locations in the city, after local residents discovered the deceased, who were handcuffed, in shallow graves, according to provincial police chief Chuon Narin. The bodies were found in the so-called Chinatown area of the city and in Prey Nob district.

A police report reveals that the bodies were found on January 21, 2022, leading to the detention of six individuals — He Ji Hui, Zhou Feng, Liu Li Jian, Yi Cong Yong, Yang Guangyue and Chen Shinwei. An additional five suspects were also detained, and they are: Peng Jin Long, Chen Wei Wen, Yang Wei Heng, Li Wei Song and Wei Ya Qi. The police also rescued three people who were being held at the group’s company premises.

While the police report states that the first six were charged for premeditated murder and the five others for illegal detention, extortion and illegal import of weapons, provincial court spokesperson Hout Vichet said all 11 were sent to pretrial detention and face all four charges.

Narin added that three others had been detained but were released for being unrelated to the murder case.

“We arrested the [11 people] in series with cooperation from the central security department of the National Police, penal crimes department and other city and provincial police forces,” he said. “Now we have cracked down successfully.”

Sihanoukville has been riddled with crime and reports of detention, torture and forced labor. Rescued victims have spoken of compounds with hundreds of workers forced to perpetrate online scams or risk beatings.

In a separate case, six people were arrested and found in possession of weapons after their car collided with a traffic barricade on January 30, 2022, in Preah Sihanouk’s Sihanoukville, according to a police report. On searching their cellphones, the police found photos of three Vietnamese women handcuffed, and further investigation revealed that the six had detained, tortured and extorted around $35,000 from the three victims.

Police chief Narin said, “After kidnapping of the other women from Vietnam for ransom, they escaped to Preah Sihanouk province, and the expert forces suspected them and our forces followed them and arrested them.”

Spokesperson Vichet said the case was yet to be forwarded to court prosecutors.

Military police also intervened in the case, Chantheng said, and detained seven Cambodian and seven Chinese nationals, referring further cases to the military police. It was unclear if all were suspects in the case.

The driver of the bus told local news outlets that the suspects had intercepted his bus and beat him.

Military police spokesperson Eng Hy could not be reached for comment on Wednesday.