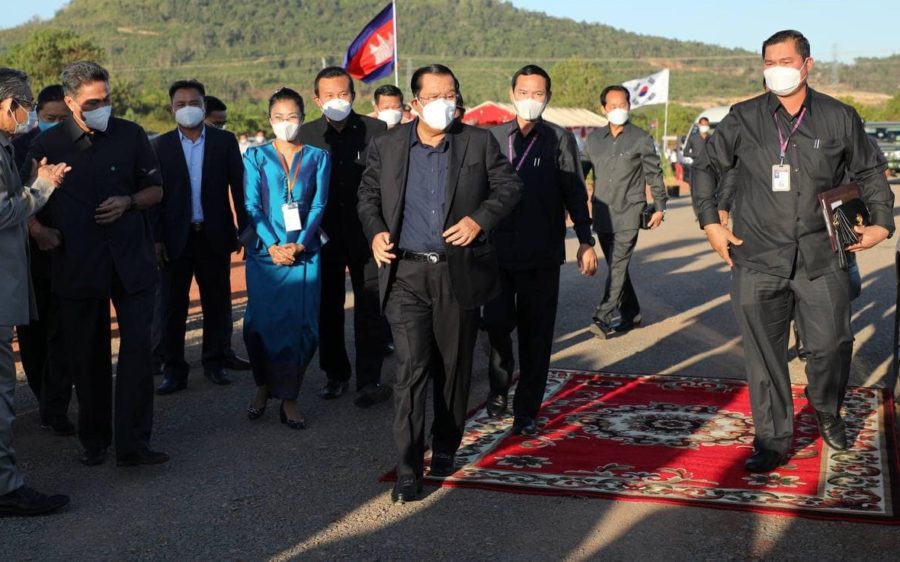 The government is in debt to the Ly Chhuong construction company due to a series of infrastructure projects given to the company without a bidding process, with payments deferred in a “build first, settle later” racket, the prime minister said.

“This thing will become cancer. The lower [sub-national level] owed the money, [but] required the upper level to pay for it. You colluded with each other without bidding, [and] get along with each other. This is corruption,” Hun Sen said in a groundbreaking ceremony in Koh Kong.

The company of Ly Chhuong, the son-in-law of National Assembly vice president Cheam Yeap, has built the National Assembly and Peace Palace in Phnom Penh; has undertaken the construction of the provincial hall, appeal court, street lamps, roads and other infrastructure in the new Tbong Khmum town; and is building a road and university in Kampong Thom, among its portfolio of works.

Hun Sen said he was surprised to be told by the Finance Ministry about the government’s debts to the company.

Many projects had been awarded without a proper bidding process in a “build first, settle later” scheme, Hun Sen said.

All projects with the Ly Chhuong company that haven’t yet started must be canceled; all provinces owing money to Ly Chhuong must repay within 20 years; and the company would be put on a blacklist if it did not stop the practice, the prime minister said.

“You have to clearly understand that this is public debt that the royal government can’t accept. [It is] not only unacceptable, [but] those governors that do that must pay the money by themselves or [they] could lose their position,” he said, accusing provincial authorities of colluding with the company over bridges, roads and other projects and leaving the national government to foot the bill.

Kampong Thom provincial deputy governor Lum Kuntheary acknowledged that her province had a road and university construction project with Ly Chhuong, but said she did not know whether there was impropriety.

The projects had a proper contract with the Finance Ministry and would be repaid by 2024, she said.

“Talking about collusion or not collusion, I don’t know about this. But the important thing is [our] contracts cannot be hidden.”

Regarding Hun Sen’s warning, Kuntheary said she did not fully understand the situation as she was not a high-level economist.

“[We] need to respect it, and we will wait and see how the leaders solve it. I dare not to answer. I don’t know how to solve it,” she said, adding that there was nothing to hide and people were happy with the road and university.

Keng Bunna, deputy governor of Tbong Khmum — the country’s newest province, which has constructed a new capital city — said Ly Chhuong was building a lot of the infrastructure, but that the work was under a contract with the national government.

Ly Chhuong projects included accommodations for civil servants, roads, the provincial hall, appeal court and street lamps, all being developed step by step by the government, Bunna said. There were many more, and he did not know when they would all be complete.

But there was nothing untoward happening, he said.

“We don’t have [projects] that build first and settle the state money after. We don’t have one,” he said, adding that he would take Hun Sen’s warning seriously. “We need to think about and avoid such a thing.”

But he would not comment on the prime minister’s remarks against the company. “The SOP is very precise, and we are afraid of the law even more than [we are] afraid of the tiger, than afraid of the tiger. I dare not to do anything,” he said, using an abbreviation for standard operating procedures.

Yeap is also known for his alleged involvement in a 2013 hit-and-run death.

A man who picked up a call to Ly Chhuong Construction’s Commerce Ministry-listed phone number said he had nothing to do with Chhuong.

Heang Sotheayuth, spokesperson for the Ministry of Public Works and Transport, said he did not have information about the money owed to Ly Chhuong, but supported the prime minister’s remarks.

“If there is any wrongdoing, and after having received the advice from the government leader, we have to quickly solve it, correct those mistakes,” Sotheayuth said, adding that his ministry always gets approval from government leaders before implementing large projects.

“If we fail to inform or get approval [from upper levels] and we do it alone, it is normal to face mistakes. Whenever it is looked at by many people, the mistake is less. [If] we look with fewer people, the mistakes are more and the responsibility will be taken alone.”

“When the procedures for public acquisition are violated … it will be an opening to cause the loss of benefits such as costs to the national fund, and it leads to serious corruption,” he said.