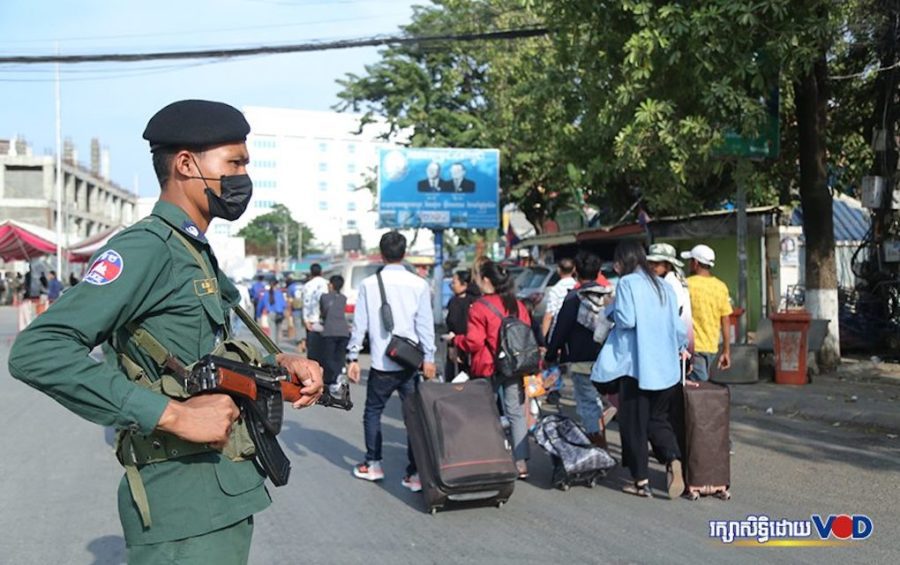 People cross the border as security forces monitor at the international border checkpoint at Poipet on November 9, 2019. (Chorn Chanren/VOD)

A sweeping state of emergency bill, which critics say would hand the government excessive powers during an ill-defined national crisis, was signed into law on Wednesday, an official said.

Justice Ministry spokesman Chin Malin said on Thursday that the state of emergency law was approved the day before after it was signed by acting head of state Say Chhum.

But Malin said the law would not be utilized unless the government declared a state of emergency based on constitutional provisions in which the king must proclaim an emergency period following approval from the prime minister and presidents of the National Assembly and Senate.

Chhum, the Senate president and head of state when King Norodom Sihamoni is outside the country, signed the bill just 19 days after it was approved by the National Assembly.

Prime Minister Hun Sen had pushed for the law’s passage due to the potential for a public health emergency in Cambodia amid the global Covid-19 pandemic. To date, the Health Ministry has confirmed 122 cases of the novel coronavirus, with no new cases reported in more than two weeks.

Under the new Law on the Management of the Nation in Emergencies, a state of emergency is defined as a period of conflict, public health crisis or national security threat, “as well as national disasters that threaten or seriously jeopardize the entire nation.”

The law allows authorities to restrict people’s rights to travel, gather, work and conduct business. In addition, the law permits the government to restrict communications and the media, as well as seize private property and declare martial law.

Individual violators of the law who are deemed to be disrupting public order or threatening national security during an emergency period can be imprisoned for up to 10 years and fined up to 10 million riel ( $2,500).

After the emergency bill passed the Senate earlier this month, Rhona Smith, U.N. special rapporteur on human rights in Cambodia, raised concerns over the bill, saying in a statement that it “can potentially be used to infringe on the right to privacy and unnecessarily restrict freedoms of expression, association and peaceful assembly.”

However, Malin dismissed her criticism at the time, saying the law strengthens democracy, rule of law and human rights in the country