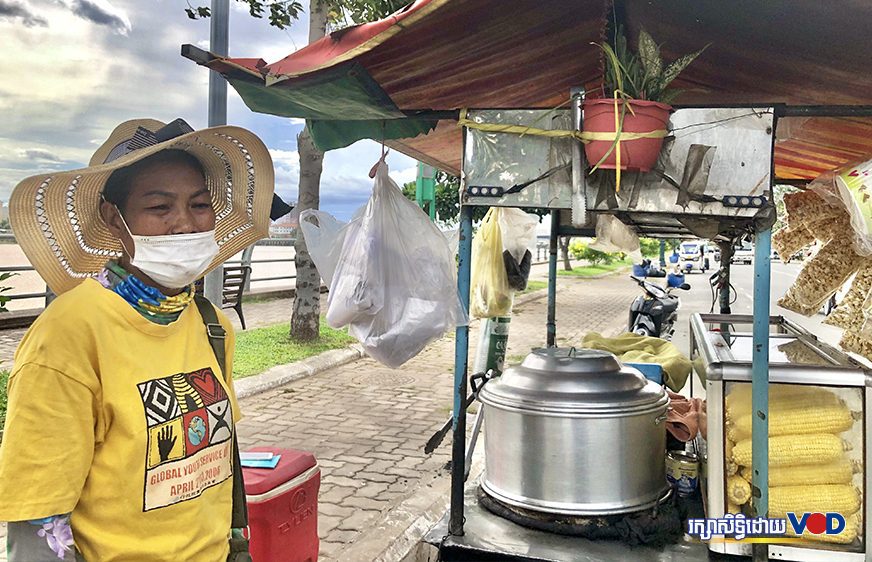 Thirty-year-old Eak Phea drags his ice cream cart through a drizzle along quiet Phnom Penh streets. Children used to flock around his cart, he says, but the pandemic has made everyone cautious.

He starts his day at 8 a.m., and completes a circuit around the markets of O’Russei, Dei Hoy, Kramuon, Tralok Bek and Toek Thla by 7 p.m.

He tries to provide for seven family members with the ice cream sales, he says, but his income has dropped from as much as $25 a day to $5 or less.

“People are afraid of each other everywhere,” Phea says.

Chan Sros sells soft drinks from a cart near the riverside, with her 7-year-old son nearby.

She’s on the verge of tears as talks about searching for morning glory for a bit of extra income, or looking for work washing clothes in people’s houses. One day, she had nearly nothing, and went to ask for rice from the Chroy Changva commune office. She also bought two eggs. That was enough to get her and her child through another day.

She hugs her knees as she talks, explaining that the father of her child left her when she was one-month pregnant. Her son needs to come along whenever she is out working.

Vorn Pov, president of the Independent Democracy of Informal Economy Association, says it’s been a hard time for an already impoverished demographic of informal workers.

Many of their incomes have dropped sharply, almost to zero, Pov says.

“The serious decline was from April 2021,” he says. “The situation every day is that selling is difficult.”

Those who are newly finding themselves in dire straits should apply for an IDPoor card from commune officials, he says. “The assistance will be provided until further notice.”

From June last year to July this year, the Cambodian government has issued $380 million in subsidies to 658,857 families, equivalent to more than 2.6 million people nationwide — a rate averaging over $550 per target family.

Sros, the drink seller, says she received 200,000 riel, or about $50, from the government as Phnom Penh was placed in lockdown earlier this year.

She used to wash dishes at a restaurant, but there was no longer enough business at her former workplace. She got her $100 drink cart about a month ago, and she must repay it through installments.

Chhoeun Taing Hik, 43, says she and her husband rely on selling popcorn to pay their rent, water, electricity and debt — and with what they have left over they buy food.

She was a farmer in Kandal province’s Sa’ang district, but moved to the capital to sell popcorn when her farm had a low yield two years ago and she couldn’t pay back a loan.

Before Covid-19, she could make around $25 a day, but now the couple’s income is down to about $10, she says. Despite the debt, she says they may return to the countryside, because at least there they’ll be able to find some food.

“If we cannot earn a living these days, we will have nothing to eat.”