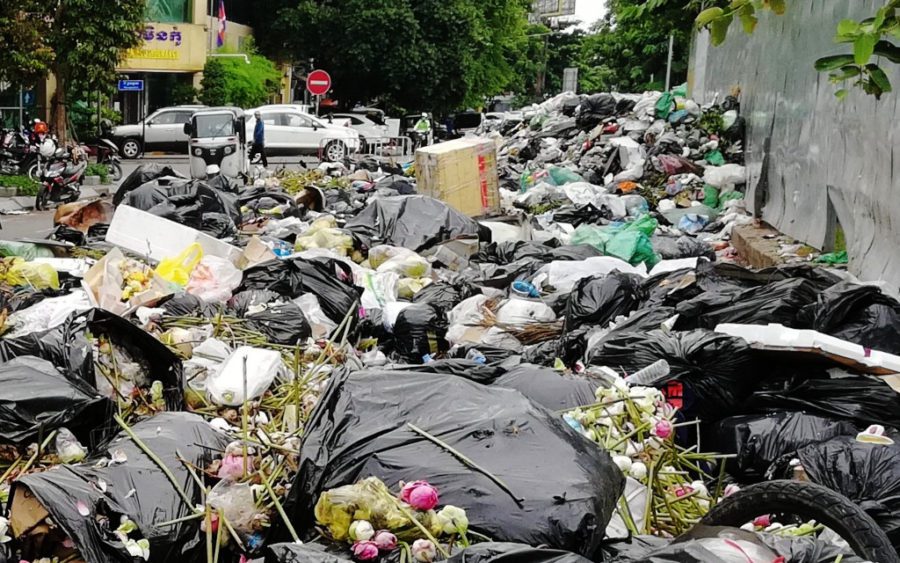 Workers and authorities are set to continue negotiations on Wednesday over a garbage collectors’ strike that has led to major trash pile-ups around Phnom Penh and to some residents calling the capital “Garbage City.”

Fearing that a restructuring of the city’s waste management will lead to loss of seniority bonuses and difficulty in accessing severance pay, more than 2,000 workers at trash collector Cintri have gone on strike, leaving local districts and communes scrambling to contain the thousands of tons of trash Phnom Penh produces every day.

Hat Pitou, 52, a tuk-tuk driver working near Phsar Silip in Daun Penh district, said Tuesday he had seen no improvement in the rate of trash accumulating in the area, and he was getting increasingly concerned about health impacts.

The city was hardly “the Pearl of Asia” right now, Pitou said. “Now some citizens think this is not Pearl City but Garbage City.”

Nearby, Sok Nak, 47, said the stench was becoming unbearable. “The people can’t eat,” he said.

Heng Sour, spokesperson for the Labor Ministry, said Phnom Penh governor Khuong Sreng would talk directly to workers on Wednesday to reassure them.

“If there are any firings or changes of company, there will be a settlement for the severance pay,” Sour said. “We will explain this and guarantee a settlement based on the formula stated in the law and which can be acceptable by both parties.”

Cintri is in the midst of major restructuring, placed under state control a year ago amid complaints of poor service, with its responsibilities slated to be split up among three companies next week.

Workers say that leaves their future in doubt.

Rong Saray, one of the workers leading the strike, said Tuesday evening that he had heard through social media that the Phnom Penh governor was promising new solutions for the workers. But he had not been told directly and remained skeptical.

Saray added that he didn’t think his team would be easily replaced. Few people were interested in collecting garbage, and the current workers were experienced, he said.

“Our workers will still keep the same stance without any change,” Saray said. “We will continue to protest every day, and we will not go to work, and [we will] gather in front of the garage till there is a solution.”

City Hall spokesman Met Measpheakdey could not be reached for comment.