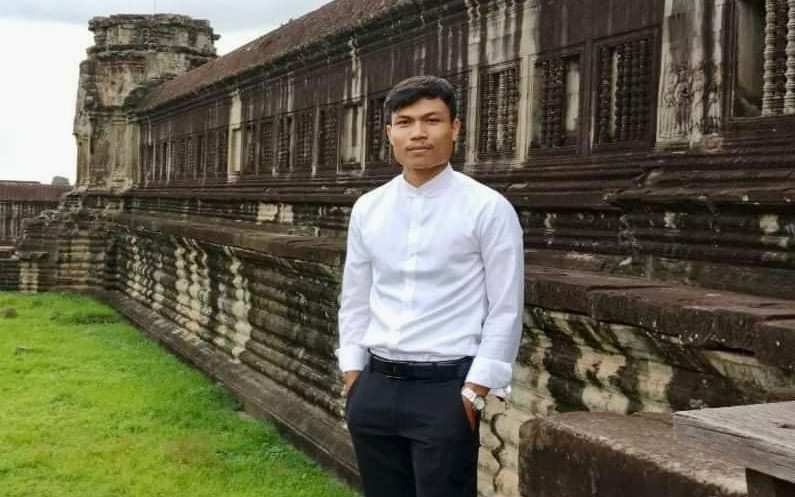 Yuong Soda, a 25-year-old teacher, says he has been separated from family, friends, relatives and students for more than a year. He writes when he can, working toward a book, though he isn’t getting paid. He is relying on “good people” and living in hard conditions, he said.

Soda is in hiding from the law, sentenced to a year in jail for incitement after posting in late 2020 that a Vietnam friendship monument in Pailin province signaled a threat to Cambodia’s sovereignty, and that the country would soon be raising “two flags.”

He declined to give many details about his life on the run, but said — as his appeal against his jail sentence reached the Supreme Court on Monday — that he believed that people needed to “dare to speak the truth” about “the new colonization of Cambodia.”

Soda’s post in 2020 pointed to Pailin’s Cambodia-Vietnam memorial, saying critically that “now Cambodia has a monument in nearly every province. I hope in the coming days, we will have two flags to raise at the same time like Laos. Thank you, great friend.”

He was charged, and convicted at the Pailin Provincial Court on April 7 last year for incitement and sentenced to one year in prison. The Appeal Court in Battambang upheld the verdict on October 28.

During the Supreme Court hearing on Monday, defense lawyer Chhim Chansathyanon argued that Soda had merely expressed himself as a citizen, something protected by the Constitution.

Soda was just an ordinary teacher with no influence to cause chaos in society, Chansathyanon said.

“Since the posts in 2020 till now, there has not been any phenomenon caused by the Facebook posts,” the lawyer said.

Supreme Court prosecutor Ouk Kimseth noted that Soda had also written on Facebook that he would rather work on a plantation than serve “the traitor” as a civil servant. Kimseth asked: “Who is the traitor?”

“All these are actual evidence of incitement to commit a felony,” the prosecution said.

A decision is expected on February 21.

Soda has continued posting on Facebook from hiding, writing poems often about nationalism.

The country has a history of anti-Vietnam sentiment: Two Khmer Rouge leaders have been convicted of genocide against ethnic Vietnamese, while a Vietnam-backed regime ran the country in the 1980s — a fact which many nationalists now point to as one of the origins of their fears. In the recent past, the sentiment has led to violence against Cambodia’s Vietnamese minority, including when opposition-fueled mobs killed several Vietnamese residents in the late 1990s.

Soda said his comments related to Khmer history and how there seemed to be “a new colonization of Cambodia.”

“It is a worry that we together have to dare to talk about and dare to express ourselves about. This territory belongs to the Khmer, so why can’t we speak out about our worries to our nation?” he said.

Soda said he wanted justice from the courts, saying his conviction was unreasonable and illegal. He had only expressed himself in line with human rights, he said.

“It is an injustice,” he said.