Teachers, Parents Jittery as Schools Reopen Across the Country 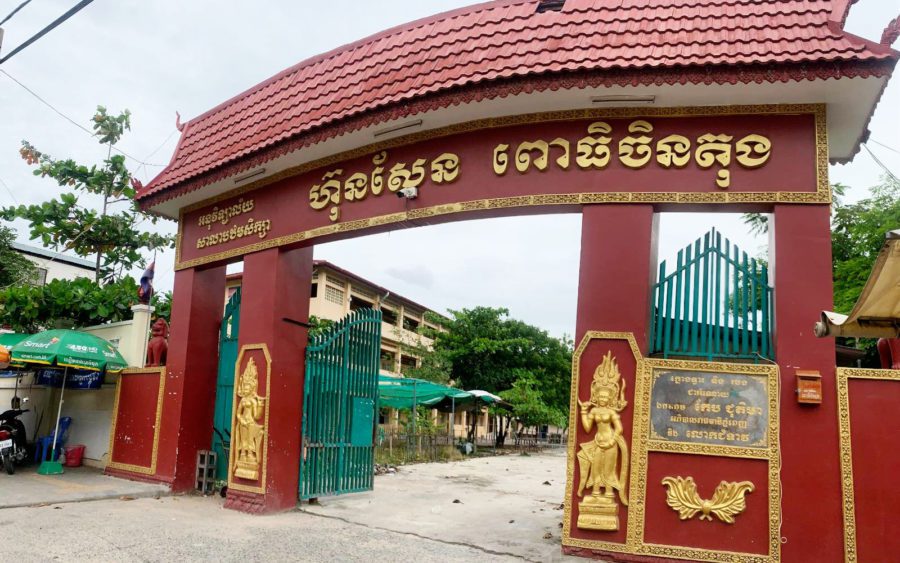 Boeng Keng Kang district officials have been assisting staff at the Chea Sim High School in the district to clean the school premises. Officials are also helping place and arrange desks in classrooms, as secondary schools across the city rush to reopen on Wednesday.

Nuth Nguon Ly, the principal of the school, said the school was ready for students to return to the classroom, nearly eight months after schools were closed in February when Phnom Penh saw a rapid increase in Covid-19 cases.

“Ready! We are ready because we have sprayed disinfectant, we have cleaned the environment and we are ready,” Nuth Nguon Ly said excitedly last Friday.

Phnom Penh City Hall announced last week that around 200 public and private secondary schools would reopen this week for students aged 12 to 18.

Nguon Ly said he was expecting 766 students to walk into the school on Wednesday, and to ensure that students are socially distanced, the school will split each class into two sections — each section will be in school three days a week.

“And the lessons in both shifts will be the same. And in the future, we will have tests to measure students’ ability by level and ability,” he said.

When half the students are in class, the other half will have to do exercises and practice their lessons at home, Nguon Ly said. The principal said he was worried that students would have missed lessons during the on-and-off schooling, but teachers would keep track of their progress for the first month of school.

Schools were first closed in March 2020 when Cambodia had its first outbreak of Covid-19 infections. After gradually reopening from August, they were shuttered again in November and briefly opened from January to February this year.

Other provinces too have started or announced resumption of in-person schooling, including Stung Treng, Prey Veng and Tbong Khmum. Phnom Penh’s decision to reopen schools factored in the nearly 90 percent of children aged 12 to 18 who have been vaccinated.

Students have had to rely on online learning, or lessons telecast on state television, but economic disparity has hindered childrens’ access to digital learning, especially in rural areas and among vulnerable communities.

Hok Chheng Hour, the deputy principal at Tra’ngel Secondary School in Kampong Chhnang province, said the school reopened on Monday. Students were mostly informed of the splitting of classes and allowed to meet their classmates, with classes expected to start soon.

The deputy principal was a little anxious about the transition from online learning to in-person learning, saying it was likely that unequal access to smartphones or the inability to grasp online lessons would have hindered some students.

“In the past, students were in one class, but now they are split into three classes, so their study time has reduced,” Chheng Hour said. “Also, students who went up from a lower level to an upper level might not be able to catch up well.”

Huot Bunheang, who teaches physics at Preah Sisowath High School in Phnom Penh, is also worried about students who were unable to pay attention during online classes or were hesitant to ask questions.

“Thus, during online classes some students copied from each other,” Bunheang said. “Students did not ask us during an online class. They asked friends and they copied each other, according to my experience.”

Tour bus driver Set Channak hoped that the Education Ministry would help schools plan lessons so that students who had missed lessons in the past 20 months or were not able to adapt to online learning could catch up with their peers. His daughter will start grade 9 at a high school in Phnom Penh’s Kamboul district.

“Teach them not too fast or too slow because [my daughter] did not learn well when studying [at home]. She did not know much,” he said.