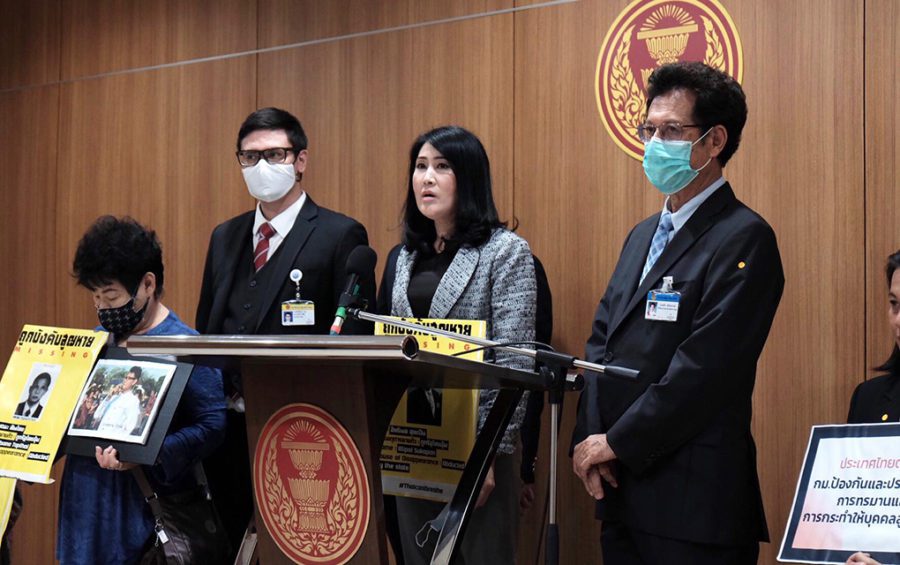 CORRECTED Oct. 25—Sitanan Satsaksit is being summoned in Thailand for violating the country’s Covid-19 laws by speaking about her brother Wanchalearm’s disappearance in Phnom Penh and the ensuing investigation.

Since the June 2020 abduction of her brother — a Thai pro-democracy activist who was living in exile in Phnom Penh — Sitanan has become an activist against enforced disappearances, speaking at rallies across Thailand.

Speaking over the phone on Wednesday with her lawyer translating from Thai, Sitanan said she was invited to speak in a pro-democracy rally at a busy intersection in Bangkok on September 5, and she delivered a short speech on Wanchalearm’s disappearance, and advocated for Thailand’s anti-torture and enforced disappearances bill, which is under review in the country’s House of Representatives.

She said the summons was related to Thailand’s ban on large gatherings during the ongoing Covid-19 outbreak, but since she was only at the rally for about 10 minutes, she feels she is being targeted for her criticism of investigations into Wanchalearm’s case in Thailand.

“My speech implies that the police didn’t do their jobs in investigating the case of the disappearance of my brother,” she said. “When I reveal [to the rally audience] that [police] were not able to investigate, I think the police tried to threaten me from speaking, and bully me into not talking about the developments of Wanchalearm’s case.”

Sitanan faces a potential charge under section 13 of Thailand’s Emergency Decree, which holds a maximum punishment of two years in prison and a 40,000 baht fine, or around $1,119, according to Pornpen Khongkachonkiet, director of Thai non-profit Cross Cultural Foundation and a lawyer on the case.

Pornpen said Sitanan had only found out about the police inquiry after another activist present at the September rally noticed her name on a list of 12 activists that police had flagged. The lawyer went to the police station and saw they had submitted the letter to her official address in Ubon Ratchathani province, but Sitanan’s family could not find a summons.

Sitanan and the other activists were supposed to be questioned on Wednesday at 2 p.m., but Pornpen said she found out at noon that day that the court delayed the inquiry until October 25.

“Yesterday we also informed the U.N. and diplomats in Bangkok that she’s at risk of a charge,” she said. “I think the U.N. maybe called the prosecutor … so that’s maybe why it was postponed.”

A representative from the Bangkok South district’s Attorney General office asked a reporter to call back on Monday, because the staff at the office on Wednesday afternoon could not speak sufficient English.

Sitanan has been critical about both the Thai and Cambodian governments’ response to her brother’s disappearance, saying both governments have ignored new evidence she has presented in the course of her own investigation of the case. Though Sitanan and journalists collected evidence showing Wanchalearm had lived and been abducted in Phnom Penh, the Cambodian government has declined to even acknowledge that the disappearance happened within the country’s borders.

Wanchalearm’s disappearance has been a rallying point in Thailand’s pro-democracy movement, as the 39-year-old activist lambasted Thailand’s ruling party with satirical posts and direct critiques through social media posts, and many believe his disappearance was related to his words.

Pornpen, the lawyer, said that the 11 other activists who were summoned for this rally were “usual suspects” — pro-democracy activists who are regularly questioned for their participation in rallies — but this was the first time she could recall that an enforced disappearance activist faced legal pressure from the state. This worried Pornpen, because it could silence others to speak against enforced disappearances.

“If the government successfully uses judicial harassment, none of the victims, who are already very silent, would come out and speak again.”

Correction October 25 6:17 p.m.: Thai police summoned a total of 12 activists including Sitanan Satsaksit in connection to the September 5 protest, not 13 as originally reported.