Thai Police Tell of Another ‘Blood Slave’ Case in Cambodia 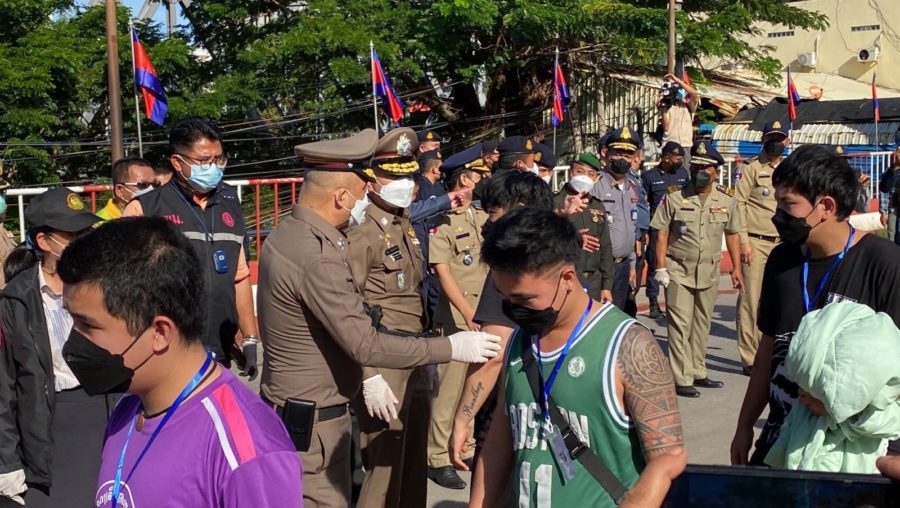 Thai nationals who were trafficked to a Pursat province special economic zone are inspected by Thai and Cambodian authorities at the Poipet border on November 24, 2021. (Royal Thai Police)

Royal Thai Police assistant commissioner-general Surachate Hakparn said a Thai woman who was rescued from a slave compound in Cambodia had three to four bags of blood harvested from her and was in danger of organ trafficking, according to Thai media.

Cambodian police, however, laughed off the account, saying it was “ridiculous.”

The disclosure comes after Cambodian police said that an earlier story of a Chinese “blood slave” in Sihanoukville was fabricated, and the Preah Sihanouk Provincial Court charged four people — the alleged victim, a doctor, a rescuer and his assistant — for incitement over the story.

According to Thaiger, “Police are now warning Thais about accepting jobs overseas as not only can they get wrapped [up] in an illegal scam operation, but police say organ traffickers have been known to remove kidneys, the liver, and eyes after drawing blood.”

Eight Thais were repatriated from Cambodia on Wednesday, and among them was a victim who told of blood harvesting, reported Thaiger, Thai PBS World and state-owned Thai broadcaster MCOT’s Thai News Agency.

Thaiger cites Surachate as saying the woman was lured into working in Cambodia, and was “assaulted, detained, and left to starve” after she refused to undertake work.

After a failed escape, she was taken to another compound and put in a room with surgical equipment, according to Thaiger. They took three to four bags of blood from her, and were preparing to harvest her organs when she was rescued and taken to a hospital in Poipet, the account says.

“Police have checked the Line group of the Chinese organ trafficking gang and discovered that would prey on certain victims for their body parts, such as kidneys, eyes and livers, to be sold on the black market,” Thai PBS world reported.

Thai News Agency said the rescued victims had been in Sihanoukville.

“It is ridiculous to me. There is no [case] and if there is this incident, ask her to report to authorities. But such an incident, it does not happen,” Narin said.

He pointed to the previous case that police say was fabricated.

“They forget how it destroys our country and the nation,” Narin said. “Any country, when there are fake [stories] and fabrications like this — whether we can accept it or not as the authorities. … I cannot accept this.”

He added that the operation was not a “rescue.” The eight rescued Thais were merely illegal immigrants, he said.

“They come to work voluntarily, and when they leave, they request us to take them out,” he said. “It has nothing to do with detention or kidnapping, and we have taken hundreds of Thai people. Mostly it hasn’t been related to violence or force.”

Narin added that he would like to question the alleged Thai blood-harvesting victim in person.

“Come meet me personally because I am stationed 24 hours in the provincial police headquarters.”