Three Arrested Over Drowning of Schoolchildren on Boat 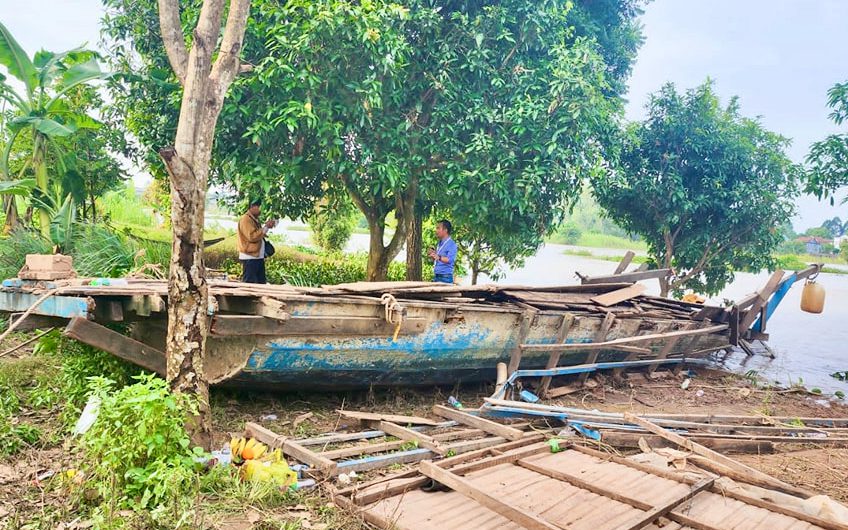 The recovered boat, in a photo posted by Kandal Provincial Police on Friday.

Two owners of a commuter boat and its 15-year-old driver have been arrested following the deaths of 11 schoolchildren last week.

The boat sank in Kandal’s Loeuk Dek district Thursday evening as the children were going home to a river island from a late English class.

Four people — including the driver and assistant — were rescued alive, but 10 children were found dead as of Friday, and the final passenger found dead Saturday morning. The schoolchildren were mostly aged 12-14.

District police chief Am Thou said that the 15-year-old driver and two people who owned the boat were arrested on Saturday. After questioning at the district police station, the suspects were sent to provincial police headquarters, he said.

Provincial prosecutor Leav Sreng said on Monday that the three suspects were not in custody. The victims had accepted that the case was unintentional, he said.

“They’ve been released first, and we will look into other things later,” Sreng said.

“We’ve ordered our competent officials to go down to locations along the riverbank that use boats as means of travel [to notify people about] repairs and careful use to avoid such incidents,” Sophorn said.

Am Sam Ath, spokesman for rights group Licadho, said authorities should consider their responsibility in whether they had failed to conduct proper inspections.