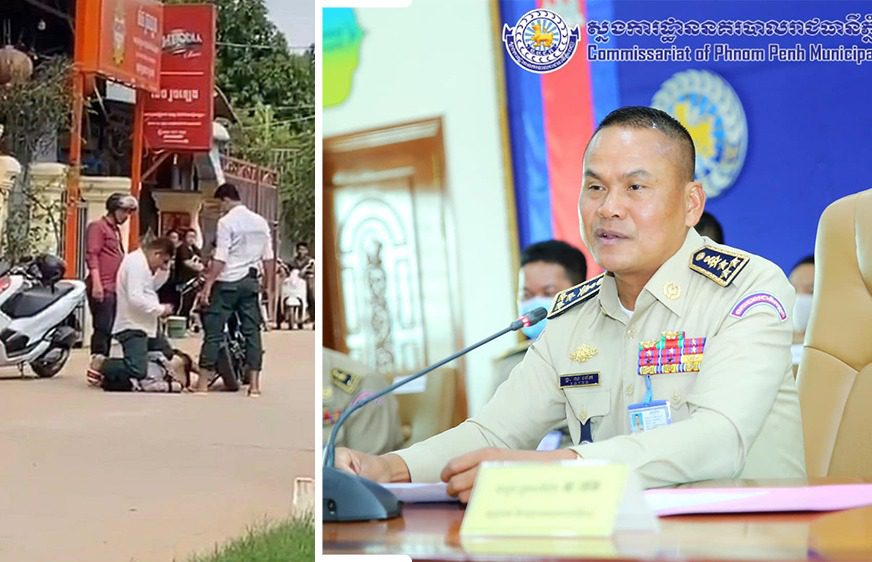 Three unnamed police officers in Phnom Penh received a written warning from the capital’s police chief this week after they were seen kicking and hitting a man in a widely shared social media video, which rights experts said warranted further investigation and potential consequences for the officers.

Multiple videos — which were posted to Facebook by user Phon Nary as early as Monday, as well as shared widely on the social network and covered in local news media — depict three men in plain clothes attempting to restrain a man, who was accused by police of buying drugs, and beating him in the process.

In videos shared on Phon Nary’s page, the beaten man is lifted into the air by officers and dropped to the ground. One man kicks the fallen man while another slaps him in the face. As the trio of officers hit the fourth man, he cries out, “Don’t beat me, I don’t know,” and later, “oh, my neck is broken!”

At one point in the video, a woman runs over to the men trying to put the restrained man on a motorbike and attempts to intervene. But the men in plain clothes push and pull her away, although she continues to struggle with them and move toward the detained man.

About a dozen bystanders, including children and others filming the scene with phones, watch as the plainclothes officers struggle to keep the man on the motorbike and the woman away from the man.

Phnom Penh Municipal Police chief Sar Thet confirmed on Wednesday that the three men in the video were Kbal Koh commune police officers, adding that the officers were making a drug arrest. But he said they had “gone too far” and he had sent a written warning to the men.

Thet declined to provide the officers’ names. He said they had been issued a first warning but suspension or firing would be considered if they continued to violate police protocol.

“We [will] use the incident as an experience for the Phnom Penh Municipal Police as well as for expert officers in some district police headquarters to be careful while enforcing the law,” Thet said. “If [the suspect’s] hands were handcuffed or he compromised to allow us to enforce the law, we do not have to beat or torture.”

Following the widespread circulation of the videos, the Phnom Penh Municipal Police released a statement on Wednesday, which names the alleged drug offender, but not the officers involved.

The incident took place on Monday and the video was widely shared online on Tuesday, the statement said. Police said they saw the man driving a motorbike, and then stop and receive drugs from another suspect who eluded authorities.

Police also said the suspect was under the influence of drugs and had allegedly attempted violence against the officers, so they responded in self-defense by handcuffing him. The man was then taken to the Chbar Ampov District Police Station.

“We acknowledge that the operational activities from the law enforcement officers are beyond the boundaries of discipline and professionalism of the force,” the Municipal Police said in the statement. “We will consider this as an experience, and educate and consider punishment in accordance with the National Police discipline [codes].”

The statement goes on to thank Facebook users for participating and therefore ensuring safety, security and social order, while simultaneously warning that social media posts that exaggerated the truth could cause social disorder and therefore could be subject to legal action.

Some Facebook users compared the videos from Kbal Koh commune to a video recording of the arrest leading to the death of George Floyd, a Black American who died in May after Derek Chauvin, a white former police officer in the U.S., kneeled on Floyd’s neck for about eight minutes. Global protests against police brutality and systemic racism followed the release of the viral video.

Am Sam Ath, a spokesman for Cambodian human rights group Licadho, said the Kbal Koh officers had violated the police professional code and their actions may warrant punishment beyond an administrative warning.

“[Police] implemented administrative punishment, but it could also involve criminal offenses,” Sam Ath said. “[The case] needs to have a clear investigation, and if there is a complaint from family and video as we have seen in which violence was used, [punishment] should be implemented based on the criminal offense.”

Though he had not seen the videos in question, human rights lawyer Sok Sam Oeun said police are allowed to use physical force as a means of self-defense, but officers are barred from using violence without a direct threat.

“The authorities have no right to use violence and beat up [suspects],” Sam Oeun told VOD on Thursday. “It is an illegal act and if it is the case, I think the ministry or their superiors should look into the case again and educate or punish [offenders] accordingly, and a prosecutor should also look whether they want to allow competent authorities to continue using power excessively.”