Traffic Fines, Raised Up to Five Times Higher, to Be Levied Later 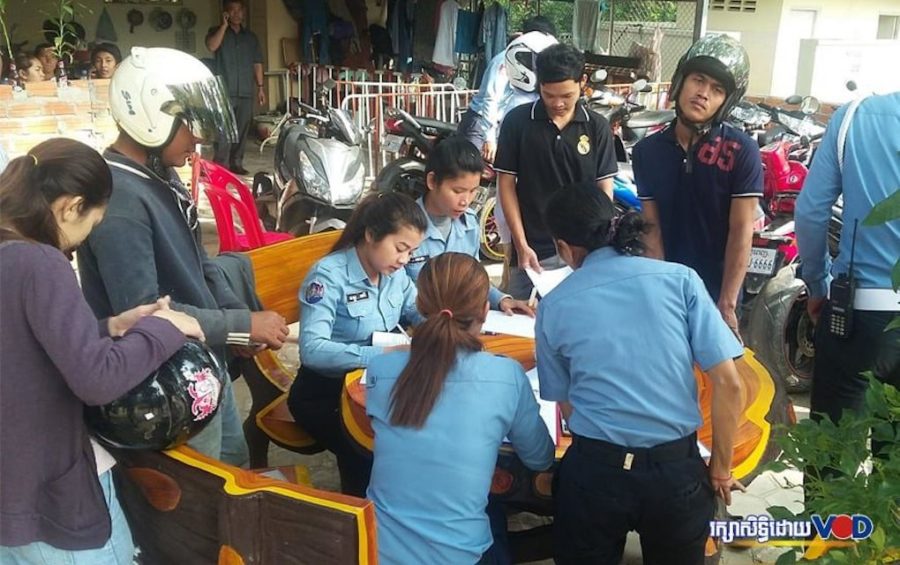 The government has raised traffic fines by as much as five times the previous rates in an effort to reduce rising roadway injuries and deaths, but officials said new penalties would not be immediately imposed to give police time to adjust.

Prime Minister Hun Sen this week signed a sub-decree that sets various penalties for traffic violations between three and five times higher than they were previously.

Interior Minister Sar Kheng reiterated on Friday that the fines were being increased in response to a rise in traffic accidents and deaths.

“In the past, we had very small fines so it wouldn’t make people learn their lessons,” Kheng told reporters at a press conference.

“The increase in traffic fines is meant for all to pay attention to and practice the law to protect their lives,” he said.

The new regulations will not be immediately implemented while police officers familiarize themselves with the new sub-decree, the minister added.

In January, Kheng declared the nation’s rise in road casualties an “emergency.”

Last year, nearly 2,000 people were killed in traffic accidents and more than 6,100 were injured — a 12 percent and 29 percent increase from 2018, respectively — according to a report from the National Committee for Traffic Safety.

Penalties for lighter offenses for car drivers, like not using a seatbelt or having a license or registration, start at 75,000 riel ($18.75), while fines start at 150,000 riel ($37.50) for heavy vehicle drivers, triple the rate they were previously, according to the 2017 sub-decree.

Drunk driving fines were increased by five times their previous rate to between 1 million and 4 million riel (about $250 to $1,000), depending on the type of vehicle.

The new sub-decree also added a range of new traffic infractions. Car dealers are responsible for registering car buyers’ license plates, and businesses will be fined between 120,000 and 2.5 million riel (about $30 to $625), depending on the vehicle’s size, if they fail to do so. Additionally, drivers who don’t get a commercial license for transporting goods can be fined between 150,000 and 300,000 riel ($37.50 to $75).

Traffic offenders have 15 days to pay their fine to authorities, or their fine will double, and then triple if they do not pay within 30 days. If they fail to pay after 60 days, authorities will file a court complaint. If a minor under 18 years old violates a traffic law, the sub-decree requires their parents to take responsibility for the fine.

Though the sub-decree technically went into effect on Tuesday, when it was signed by the prime minister, National Police deputy chief Him Yan told VOD that traffic police will be given time to learn and adapt to the new sub-decree before it’s implemented.

Yan did not say how long the transition would take, but said he expected the increased fines would help reduce traffic accidents this year.

“We have seen that [accidents] come from drunk driving, not respecting the rights of other drivers, and overtaking and so on,” Yan said. “When we increase fines by three to five times, we expect that people will respect the law even more.”

Phnom Penh resident Chak Chamroeun said he supported the move to increase traffic fines, but he asked the government to make sure citizens are fully aware of the law in order to avoid misunderstandings when authorities begin enforcing the higher fines on drivers.

“The government should disseminate [the new rules] more broadly to people across the country and allow them to clearly understand the law in order to avoid conflicts after a traffic accident or during a road arrest,” he said.

Kong Ratanak, director of the Institute for Road Safety, said raising fines is just part of the solution to Cambodia’s roadway problems, but law enforcement officers also need to effectively implement the law without corruption.

For example, rather than pay an official 15,000-riel fine, officers have been known to ask drivers for 10,000 riel on the spot, so drivers pay a reduced amount and officers can keep the full, unreported payment, Ratanak said.

“For me, if we want to change the behavior of drivers, officials have to act transparently,” Ratanak said. “If we don’t clearly scrutinize the acts of some officials, then law enforcement will not be effective.”

However, Yan, of the National Police, said there would be no corruption, claiming that the government would inspect and provide incentives to officers so they act lawfully.

“The law sets 70 percent of the fine as payment for traffic police, so they have to understand about their duties and understand what they gain [by following the law] rather than accepting what is improper,” Yan said.