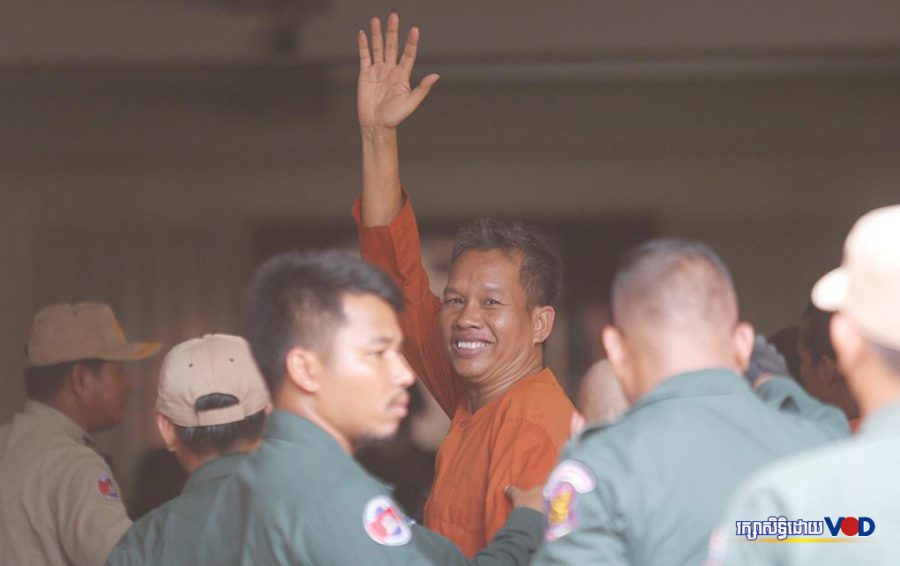 Rath Rott Mony arrives at the Phnom Penh Municipal Court on June 26, 2019 ahead of his verdict. (Supplied)

The Phnom Penh Municipal Court this afternoon handed a two-year jail sentence to a Cambodian translator for his involvement in the production of controversial documentary “My Mother Sold Me” about alleged underage sex trafficking.

The judge’s decision — which came after two hearings at the court on May 30 and June 12 — found Rath Rott Mony, 48, guilty of the charge of “incitement to discriminate.”

Presiding Judge Koy Sao said he had considered witness testimonies, arguments from the prosecution and defense, and answers from the accused in making his decision. He ordered Rott Mony to pay plaintiffs Tep Salin and Keo Malay 35 million riel (about $8,750) each as compensation.

At the May hearing, Judge Sao told the court that the families questioned by police had accused Rott Mony of promising them cash and help with their businesses in order to persuade them to tell false stories. Plaintiffs claimed they had been paid between $100 to $200 dollars after the completion of the documentary, the court was told.

However, Rott Mony denied the accusations, saying there had been no set-up and he merely acted as a translator for Moscow’s RT news service, playing no part in structuring the story of “My Mother Sold Me.”

While being escorted out of the courtroom this afternoon, Rott Mony said the decision was unjust and he had done nothing wrong.

“It is unfair to me because I did not commit [the crime] as I was charged,” Rott Mony said. “I will consider appealing this verdict.”

The 27-minute documentary, which aired in October, tells the stories of Cambodian girls allegedly sold for sex to alleviate their families’ poverty. The Cambodian government immediately rejected the documentary’s claims, saying the families had been paid to make false statements to interviewers.

Rott Mony was arrested in December after the families were questioned by police.

Defense lawyer Lor Chunthy was not present at the court and said he had yet to see the judge’s reasoning behind the decision.

Nevertheless, he was disappointed by the guilty verdict and sentence, Chunthy said.

“There are no facts that amount to a crime,” he said.

His client had been demoralized since the first hearing when it appeared the charge would stick no matter how they defended it, Chunthy said.

He would meet with his client next week to decide on whether to appeal, he said.

“Ratt Roth Mony should have never been arrested, much less tried and convicted, for his actions as a local fixer and translator working on the Russia Today documentary,” Robertson said.

The case against Rott Mony was an attempt to “cover up” the realities uncovered by the documentary, he said.

“The push to imprison Mony is an example of Cambodia playing ‘shoot the messenger’ of a person who told the international community about an inconvenient reality the government wants to hide, that the sex industry in Cambodia includes girls under 18 and the government officials are failing to adequately act to address it,” he said.

“The conviction of Mony should be quashed immediately, and he should be released to join his wife and young son.”

Correction: An earlier version of this story misstated the dollar amount ordered for compensation.