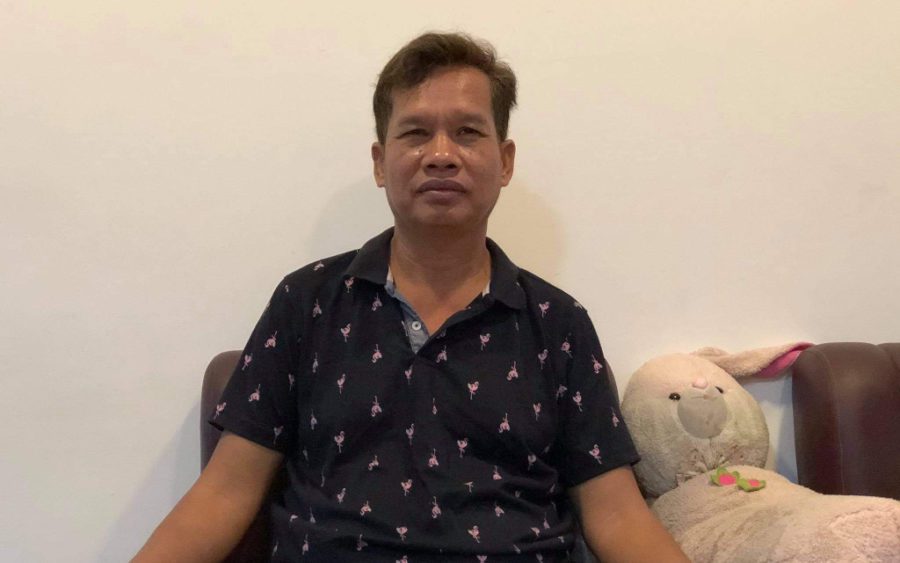 Rath Rott Mony, a translator jailed for two years over his involvement in a controversial documentary on child sex trafficking, upon his release from prison on December 11, 2020. (Supplied)

Rath Rott Mony, a translator jailed for two years over his involvement in a controversial documentary on child sex trafficking, was released from a Phnom Penh prison on Friday after completing his sentence.

The Phnom Penh Municipal Court found Rott Mony guilty of incitement to discriminate in 2019 after women featured in the Russia Today documentary about alleged underage sex trafficking accused him of promising them cash to tell false stories on camera.

Officials at the time called the 27-minute film, which showed women and girls’ faces and names when originally released, “fake,” a “fabrication” and one that portrayed a “negative image” of Cambodian women.

Rott Mony denied the allegations, which came after mothers — who say in the film that they sold their daughter’s virginity due to poverty — were questioned by police. After Rott Mony was arrested in December 2018, RT said it stood by its reporting and had no reason to doubt the film subjects’ accounts.

Rott Mony was released at 3:30 p.m. on Friday because his prison sentence was finished, attorney Sam Tithseyha told VOD.

“I haven’t received any notification [from the court]. But if we count since the day he was arrested up to now, it is time for him to be released,” Tithseyha said.

During Rott Mony’s trial and appeals, he maintained that there had been no set-up and he had merely acted as a translator and news fixer for RT. Upon his release on Friday, the unionist-turned-translator said he was glad to be free.

“I feel like I’m not sure whether my sentence is over or not, but now I just know I am happy,” he said.

After his release, he visited a pagoda for a water blessing ceremony, and met his parents and in-laws, he added.

Rott Mony said Friday evening that he had not yet seen his wife, Long Kimheang, who fled the country with their son after she said she was threatened with arrest by authorities for publicly calling for her husband’s release.

After Rott Mony’s sentencing, rights advocates criticized the court decision, and the U.S. Embassy said the conviction “further [eroded] the credibility of the Cambodian judicial system.”

At least one of the film’s subjects told the Khmer Times around the time of Rott Mony’s arrest that the story she told in the film about engaging in sex work out of economic necessity was true.