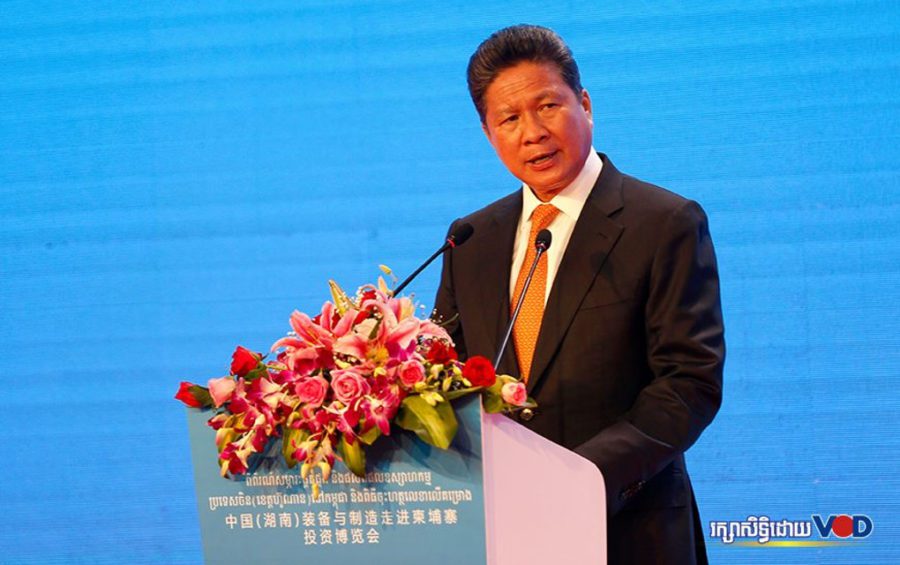 Speaking in front of Chinese politicians and businessmen at an exhibition of industrial equipment from China’s Hunan province in Phnom Penh, Chanthol thanked the Chinese government for having provided loans to Cambodia to build roads and bridges.

The government “would like to encourage all investors, please join with the Cambodian government, and cooperate with the Ministry of Public Works and Transport to build more infrastructure, which is needed,” Chanthol said.

This year, Chinese company China Road and Bridge Corporation started building a 190 km expressway from Phnom Penh to Preah Sihanouk province, at a construction cost of about $2 billion. At the road’s groundbreaking ceremony in March, a Chinese government official who was in attendance said the expressway was part of China’s One Belt, One Road policy.

Roadway users will be charged for using the road, and after 50 years the company will hand over operations of the highway to the Cambodian government, according to Nikkei Asian Review.

China is Cambodia’s largest creditor, accounting for half of Cambodia’s outstanding debt, according to the World Bank’s latest Cambodia Economic Update from May.

“Cambodia’s external debt owed to China accounts for 48.4 percent of the total outstanding debt as of the first half of 2018,” the World Bank said.

The next two largest creditors are multilateral — the Asian Development Bank and the World Bank — which cover 19.3 percent and 8 percent of total outstanding debt, respectively, the Bank said.

The Finance Ministry’s Public Debt Statistical Bulletin as of June 30 says Cambodia has more than $3.5 billion in outstanding debt to China, or nearly 49 percent of the total.

Prime Minister Hun Sen in May dismissed fears that the nation was falling into a Chinese “debt trap,” saying loans from China were low interest and low risk, and did not threaten Cambodia’s sovereignty.

San Chey, director of the Affiliated Network for Social Accountability, said much road infrastructure, including in Preah Sihanouk province, had seen severe damage amid the rise in Chinese investment.

While Cambodia had asked China for grants to repair roads, Chey said he wanted to see quality road construction, not just more loans from China to build roads.

“The damage to roads in Cambodia came from some main factors, which are insufficient enforcement of traffic laws and construction-related corruption,” Chey said.

“As a solution, there needs to be a look into the implementation of various projects, such as road-construction bidding, and another solution is enforcement of the traffic laws,” he added.