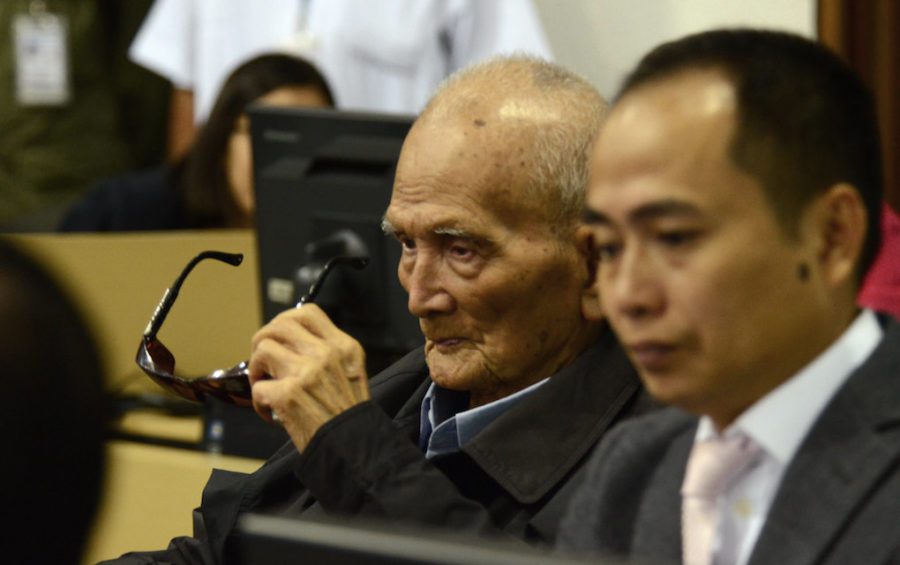 Nuon Chea at the Khmer Rouge Tribunal in Phnom Penh on November 16, 2018 (ECCC)

The Khmer Rouge tribunal’s Supreme Court Chamber on Tuesday ended appeal proceedings brought by regime second-in-command Nuon Chea, who died last week, but the court has yet to clarify whether his 2018 genocide conviction will stand, court documents say.

The chamber found that “the death of NUON Chea has the effect of extinguishing criminal actions against him and terminates all proceedings against him before the Supreme Court Chamber,” its decision says.

The chamber was still considering an urgent request from Chea’s defense team concerning the “impact of his death on the trial judgement and underlying convictions.”

Tribunal spokesman Neth Pheaktra said on Wednesday that the chamber will decide whether Chea’s genocide conviction stands before the tribunal “in appropriate time.”

Chea, the ultra-communist party’s former deputy secretary, was convicted in November for genocide against ethnic Vietnamese and other crimes alongside former regime head of state Khieu Samphan. The tribunal’s Trial Chamber also found Chea, who was 93, guilty of genocide against the ethnic Cham Muslim minority. Both men were sentenced to life in prison.

Chea’s defense attorneys, who were fired by the tribunal on Friday, began appeal proceedings against the November convictions in July. The appeal was pending when he died on August 4 after spending months in hospital in Phnom Penh. Two days later, his defense team filed a request seeking clarification on how his death would impact the appeal.

His lawyers had requested that the Supreme Court Chamber either end the appeal proceedings, in which case they said the Trial Chamber judgement convicting Chea of genocide would be vacated because he “continued to enjoy a presumption of innocence on appeal,” or allow Chea’s appeal to “continue in the interests of justice” post-mortem.

International defense counsel Doreen Chen has argued that completing the appeal process would allow “the truth to be finally established,” although legal experts have disputed her reasoning.

Chen had called the timing of the tribunal’s administrative decision to terminate the defense team — on Friday while they were en route to Chea’s funeral in Pailin province — “baffling, premature, and disruptive.”

On Wednesday, Chen said it appeared as if the Supreme Court Chamber was “still undecided” about what its decision to end the appeal proceedings meant for Chea’s genocide conviction.

However, the attorney said the law is clear.

“Nuon Chea is now legally innocent and the Chamber needs to publicly confirm this,” she told VOD in a message.

“Given that the Chamber appears to have almost no staff and one new judge just appointed, we don’t know when they will give their answer on this critical issue for Nuon Chea, the Cambodian people, and the [tribunal’s] overall impact and legacy,” Chen added.

But legal expert Sok Sam Oeun this week questioned the purpose of continuing legal proceedings against a dead man.

“Justice for this case, it is not sending this old man to jail only,” Sam Oeun said. “I feel I received justice when [Chea] was sent to trial.”

So far, the Supreme Court Chamber found that Chea’s appeal process must end, citing the Cambodian criminal procedure code and an internal tribunal rule, which state that criminal and civil actions against an accused person end upon their death.

But neither the tribunal’s law nor internal rules “explicitly detail the consequences of convictions” decided by the Trial Chamber against an accused person who dies after submitting their notice of appeal, the chamber said in its decision.

“Previous [tribunal] decisions terminating proceedings are not analogous to the present case,” it added, citing the cases of senior Khmer Rouge leaders Ieng Sary, who died in 2013 prior to a trial judgement being issued, and his wife Ieng Thirith, who died in 2015 while under court supervision after being found unfit to stand trial.

Chea’s defense lawyers, in their August 6 request, suggested that “if necessary or desirable” the Supreme Court Chamber judges could “propose amendments” to the tribunal’s internal rules to be made by the court’s plenary in order to clarify the matter.

In 2014, Chea, known as “Brother Number Two,” and Samphan, 88, were also sentenced to life imprisonment in a separate case for crimes against humanity committed under the Khmer Rouge regime from 1975 to 1979.